Tipperary All Time Greats - the final eight have been chosen 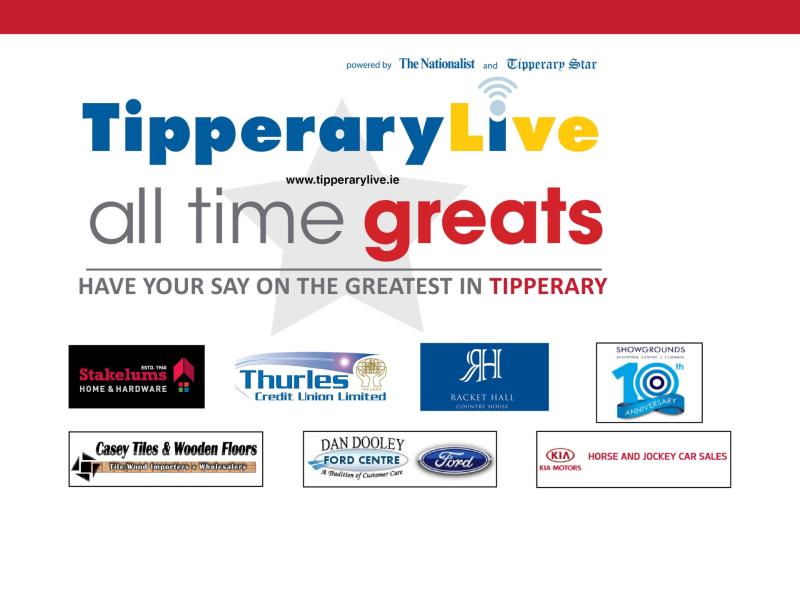 In what is turning out to be a fascinating contest, one of the stand-out duels in the Tipperary All Time Great poll is between a famed patriot from the early days of the last century and a modern day comedy duo.

The draw was held this week to determine the final eight in the search to find Tipperary's All Time Great.

This on-line poll is generating huge interest so log on to TipperaryLive.ie to get voting.

Voting in the opening round closed this week and we now know the final eight to go through to the next round.

Some great match-ups have been revealed.

The 2 Johnnies are committed Tipperary hurling supporters and regularly pen new songs to cheer on the Blue and Gold and to make the last eight in our poll they overcame the might of a legendary athlete, Tom Kiely from Ballyneale.

They now take on patriot Thomas McDonagh who paid with his life for the cause of Irish freedom. As one of the leaders of the 1916 Rising and a signatory to the Proclamation, he was executed for his actions.

Another fascinating battle will be between Jimmy Doyle, regarded as one of the greatest hurlers of all time, with six All Ireland senior medals among his collection, and the renowned Clancy Brothers from Carrick on Suir, one of the most influential Irish folk groups ever, whose breakthrough in the United States offered them a worldwide audience.

One of Mullinahone's most famous sons, patriot and author Charles J. Kickham, is pitted against Maurice Davin who helped to found the GAA, the greatest sporting organisation in the country, from a small room in Hayes Hotel in Thurles.

And to complete the line up Clonmel features heavily as one of its most famous sons Frank Patterson the renowned tenor, as celebrated in the United States as in his native Clonmel for his wonderful voice, takes on humanitarian Adi Roche who has spent over thirty years helping children affected by the Chernobyl nuclear explosion.

It all makes for a fascinating contest as you now choose who will advance in this titanic battle to be named Tipperary's all time great.

Now it's up to you to vote on your choice and see who makes it through to the final four.