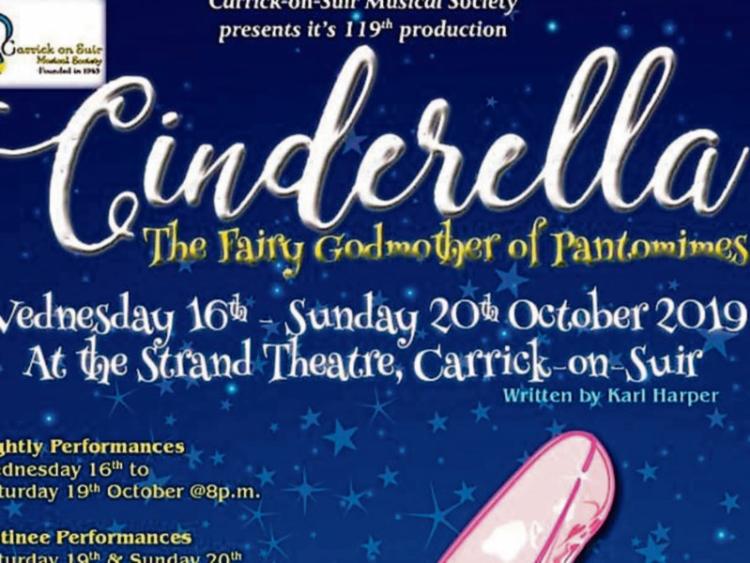 A section of the poster for Carrick-on-Suir Musical Society's panto, Cinderella

Tickets went on sale at The Strand Theatre on Monday as rehearsals ramp up for the six show run of the production from Wednesday, October 16 to Sunday, October 20.

Carrick Musical Society is advising people interested in attending the panto to purchase their tickets early to avoid disappointment as they sold out very quickly last year.

The lead role of Cinderella is being played by Kayleigh Cronin Carroll while her beau Prince William Freddie Doyle fills the shoes of the male lead for the second year in a row.

Caolán Deehy-Power plays the prince's aide Dandini while Patrick Walsh, who has come up through the ranks of the Society's Academy of Performing arts will play Cinderella's sidekick Buttons. It's his first role in the senior section of the Society.

The ugly step sisters are the  hilarious Audie Murphy and Deckie Smith Robinson with Tarryn Attlee as their wicked stepmother.

On the side of all that is good, we have the lovely Sienna Reynolds playing the Fairy Godmother and lastly we have the Herald and Guard being played by Conor Flynn and Jim Kennedy respectively.

These principal cast members will be greatly supported by the wonderful chorus and children from the Society's Academy of Performing Arts.

Cinderella runs at 8pm nightly during its run and there will be  matinee performances at 3pm on Saturday and Sunday, October 19 and 20.

Tickets cost €15 for night shows and €12 for matinees with plenty of deals on offer.

Box office is open at Strand Theatre from 11-3pm Mon, Wed, Thurs and Fri and 11-1pm on Tuesdays. 051-645050 or you can book online www.ticketsource. eu/strandtheatre