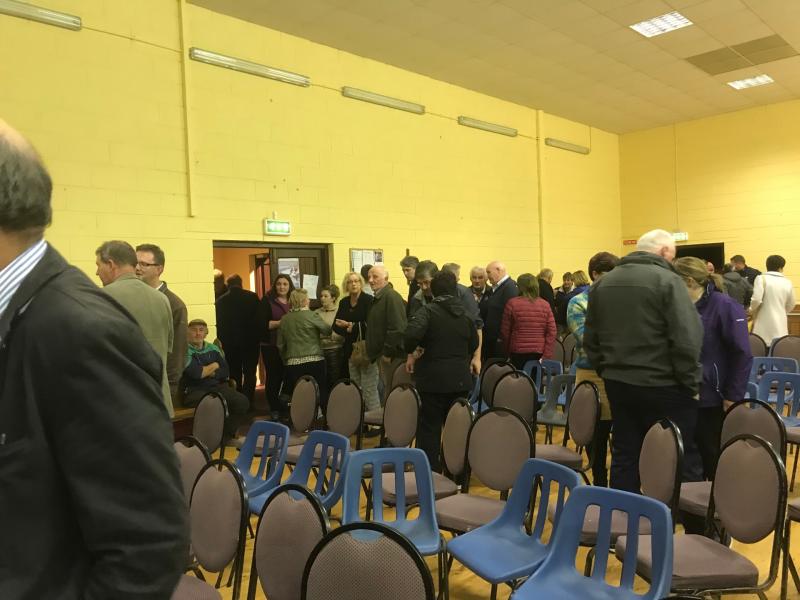 Some of those who attended this Thursday's meeting in Borrisokane

Several hundred people who attended a meeting in Borrisokane Church of Ireland hall this Thursday over plans to open a direct provision centre for asylum seekers in the town agreed to set up a liaison committee to deal with the proposal.

The meeting was called after it became known only this Monday that the Department of Justice planned to open Riverside apartments to 16 families, totalling around 84 people.

Local councillors only heard of it after they received an email following Monday's full meeting of the council.

The meeting in Borrisokane this Thursday was attended by residents, councillors Joe Hannigan, Michael O'Meara, Ger Darcy, Hughie McGrath and Seamus Morris, with local man Tom Kennedy in the chair.

The councillors, who met Department officials ahead of the meeting, all spoke of how the situation had been handled badly by the Department.

They described their meeting with the officials as "cold" and said they could not understand the difficulties.

The Department rowed back on its plan to bring the entire group to Borrisokane next Monday, and, instead, four families will arrive, with local schools already being asked to provide a place for those children who are school going.

The meeting itself was at times emotional, ranging from hostile to the proposal to welcoming. However, the main anger was directed at the manner in which the Department had gone about the proposal.

Fears were raised from the floor that the families may not speak English.

Two women said they were "terrified" by the prospect, with one concerned the families may just "hang around the street".

One woman said that asylum seekers in other towns were "intimidating women", while another said that her "blood was just boiling" at the proposal.

Other residents stated that the centre in Dunkerrin was not working.

One man who said he was from east Galway called on residents to "do an Oughtarard" to prevent the centre opening.

However, the most vehement objection came from Borrisokane native and leader of the National Party Justin Barrett, who said incidents of crime and vandalism had increased where other direct provision centres had been located.

Some people walked out when Mr Barrett spoke and he told the chair, that he had a right to speak.

Local solicitor Michael Collins said he was worried by the hostility being shown at the meeting.

"Without any migrants, we have drug dealers in the town, all of whom are well known and some with convictions as long as your arm," he said.

Mr Collins said that it was a "fantastic opportunity" for the community to do everything they can to help the families become part of our community".

He appealed for people to show compassion and extend the hand of friendship.

Mr Collins was supported by a woman who said Borrisokane was "struggling with drugs and crime" that semmed to have become acceptable.

"Walk down to the park that has been vandalised by locals and nobody has said anything," she said.

Another speaker said that Borrisokane had welcomed people from all over Europe. However, he said what was driving people's fear was the "haze of secrecy" in which the Department had gone about the plan.

Mr Kennedy summed up the meeting saying the problem was how the Department worked with a lack of information beforehand.

He said the meeting had agreed to organise a liaison committee that would be neither pro nor anti the centre.

"The problem is with the process," he said.

At this point Mr Barrett attempted to speak again and was told by Mr Kennedy he had already spoken. Mr Kennedy asked him to "stop shouting".

At this point the meeting broke up as people walked out.

Mr Barrett remained outside with a small number of supporters attempting to hand out leaflets to people leaving the hall.