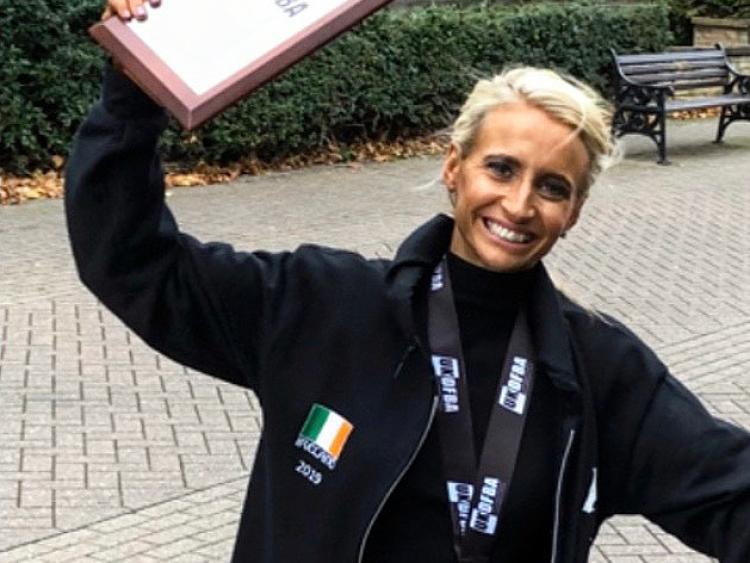 Leanne Barrett, a native of Cahir, would be more familiar to some people wearing green and white during her years with Cahir Ladies Football.
She is now preparing to compete in the States next week where she has been invited to represent Ireland in the World Natural Bodybuilding Championships that is set to take place in New York.
When she moved to Dublin for work, she took up bodybuilding and has been very fortunate to find great success. After a few months of training, she decided to take up the sport competitively and won the overall Female Body fitness title at the Irish National Championships in October 2018. Following this success, she competed on the European stage in Santa Susanna earlier this year with a Top 10 finish and in the UK International Championships three weeks ago where she was absolutely thrilled to take home bronze.
The preparation that is involved in preparing for a show like this involves rigorous training seven days a week and a very strict nutritional diet for the months leading up to a show. Leanne’s day begins her day at 4.30am where she fits in her training regime around her busy work schedule, often completing cardio sessions after work or during her lunch breaks.

In speaking to Leanne, you can sense her love and commitment for the sport. The best thing, Leanne says, is the discipline that’s involved. “I thrive on structure and routine, I set a goal and once that’s achieved, it’s on to the next challenge - there’s no time to waste when you’re up against some great athletes. I have an incredible coach who looks after my nutrition & training and I have a very strong support network around me, I’m lucky that my family and friends support me every step of the way. I’ve met some great people through competing”.

Leanne is hugely excited to take to the world stage and hopes to do Ireland proud. We wish Leanne the very best of luck and safe travels to her loyal supporters travelling over for the event.