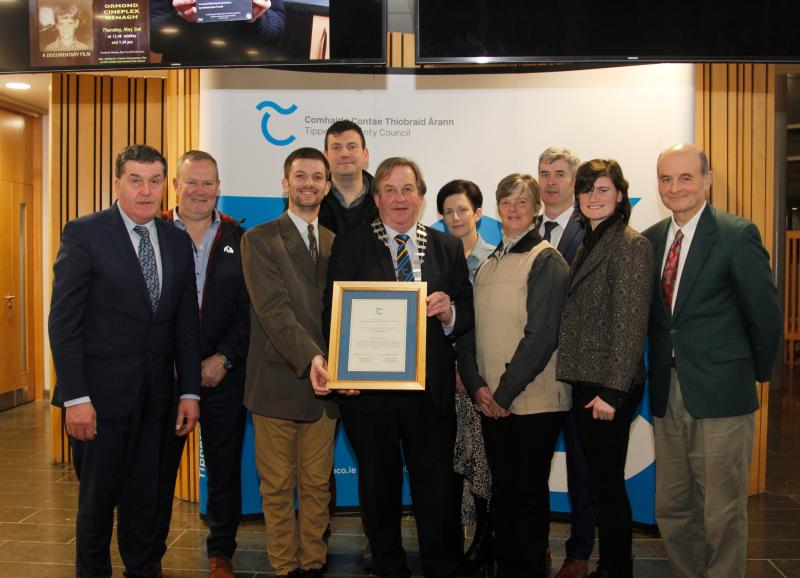 Tribute has been paid to Nenagh community groups and individuals for their outstanding contribution to the local area.

Among those honoured by Nenagh District Council at its annual awards ceremony in the town’s Civic Offices last week were residents associations, burial ground committees and Tidy Towns volunteers.

The business community was also recognised with Scroope Insurance winning an award for the bold colour and refurbishment work done on its new offices on Kickham Street.

“This is our opportunity to say thank you to all those who help to make our communities a better place in which to live and work and who contribute to the promotion of our District as an attractive place to visit,” said Nenagh MDC cathaoirleach Cllr Joe Hannigan.

He said that partnership and co-operation was what the awards were all about.

“It is not possible to over-emphasise what can be achieved when we work together,” he said.

“It is obvious that the spirit of volunteerism and achievement continues to be alive in Tipperary and in Nenagh Municipal District. Whether you are a member of a burial ground committee, a Tidy Towns committee or a residents association, the hours you devote to this pay off and are an example to everyone,” he said.

The following groups and individuals were the recipients of Nenagh Municipal District Council achievement awards: