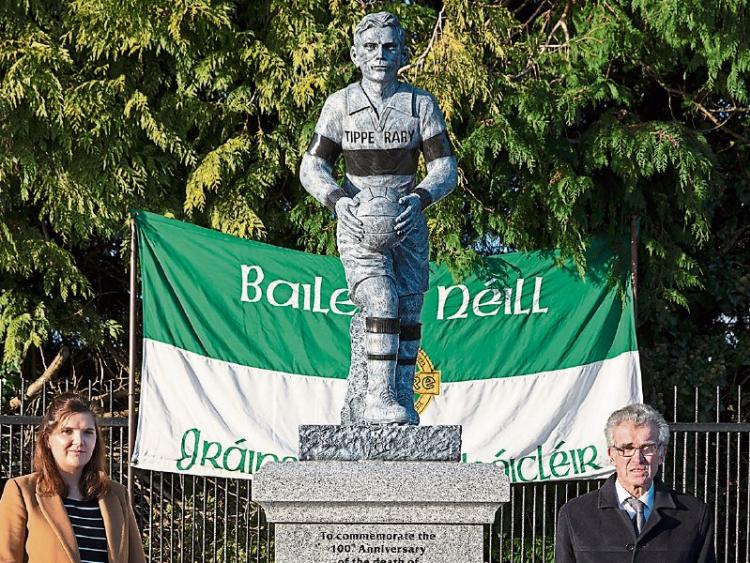 A warm winter sun shone in Grangemockler last Sunday morning, just like in Croke Park 100 years and one day previously when one of the village’s most famous sons lost his life in tragic circumstances.

Tipperary footballer Michael Hogan was only 24 when he and 13 others were killed when British forces opened fire in an act of reprisal during a challenge match against Dublin on November 21 1920, a day that has since gone down in history as Bloody Sunday.

Last Sunday in Grangemockler was a happier occasion when a very impressive, nine and-a-half feet-high statue of Michael Hogan was unveiled in the village.

The presence of the Hogan family applied the appropriate context and provided a link from the past to the present, with Michael Hogan’s grandniece Louise Hogan unveiling the statue, while the slain footballer’s nephew Eamon Hogan laid a wreath at its base.

Eamon Hogan has lived in Tullow in Co Carlow for the past 55 years but he said that Sunday brought him back to his roots. He admitted that Bloody Sunday wasn’t really a topic of conversation among the family when he was growing up, and he had heard more about it in the previous week than he ever had.

It was a very proud day and a great honour for the family to see a statue to his uncle standing in a place of pride in the village, he stated.

The statue was blessed by local curate Fr. Jimmy Browne, who pointed out that it looked across the road at Michael Hogan’s grave in the cemetery adjoining St Mary’s church.

The Hogan family’s delight and sense of honour was also expressed by Louise Hogan, who said they only wished the commemoration could have been larger to include all of those who had helped them to reach this day.

She thanked all involved and the community as a whole, who had ensured that Mick Hogan’s memory, and those of all who lost their lives, had been remembered not just on the 100th anniversary but throughout all the years.

She said that her late uncle Michael Hogan, who was named after the Bloody Sunday player, would loved to have been present, as he took great pride in preserving the family’s history.

She was especially grateful to Bernard Fogarty, chairman of Grangemockler/Ballyneale GAA club, and Joan Tobin Hurley, secretary of the Michael Hogan commemoration committee, who she said had made difficult tasks seem simple on the journey to making the statue a reality.

Louise Hogan said the iconic day that was Bloody Sunday had left such a strong mark on the community, with so many friends and teammates including Jerry Shelley, Dick Lanigan, Mikey Tobin and Mick Arrigan hailing from this parish and nearby parishes. It had a lasting impact on that generation and those to come.

She said there had been many events and tributes to mark the 100th anniversary, including the lovely social history of the parish captured in the Grangemockler and Ballyneale 1885 to 2020 book; the wreath-laying ceremony and the lectures and events staged by the GAA at community level and at national level in Croke Park.

“The recent events surrounding the 100th anniversary have once again instilled the legacy of Bloody Sunday on the War of Independence in the public consciousness,” she stated.

“We hope this statue will continue to mark the loss of a young man who was firmly part of the Grangemockler community but it is also being erected in memory of all those who lost their lives that day.

“It will also be here for the generations to come to understand the impact that day had on the War of Independence and how the Grangemockler community was a part of it.

“Bloody Sunday has been entwined with the history of the parish and his memory cherished and that of the people and the team ever since.”

She said the closeness of the Grangemockler community was evident in the letters sent to the Hogan family in the days after Mick’s death.

“They captured the affection they felt for their friend and neighbour, from Margaret Browne snipping a lock of his hair in the hospital for his family, to the secretary of the nearby Ballyneale Sinn Fein club describing Mick as physically a giant, yet as simple as a child – amiable, jolly and cheery.”

“Throughout the years his teammates have recalled many poignant moments, from the teammates who made the boisterous journey to Dublin, only to make such a sombre trip home.

“The tale of Bill Ryan’s boots being thrown out of the window in a scuffle with soldiers on the train journey to Croke Park and the lace that Mick gave him to secure his new boots. Something he held onto for the rest of his life.”

She said other memories included Mick Hogan’s pre-match nerves as he went out to mark the fleet-footed Dublin player Frank Burke, and Dick Lanigan’s recollection of the fun they had the night before the match, when Mick was throwing sweets against a window in their room in Barry’s Hotel every time they heard cracks of gunfire.

“It made two older gents in the room jump and the other pair laugh every time,” she stated.

Louise Hogan said they still wished to mark the anniversary with an inclusive event at an appropriate time to include all the clubs of the Bloody Sunday team and those who had helped them to erect this statue.

She said that Mick’s image on the sleeve of the jerseys to be worn by the Tipperary team in the Munster final that afternoon was a lovely tribute to him, all those who lost their lives and the Grangemockler community.

With accurate foresight, she added “let’s hope it brings the team some luck,” which it duly did as Tipperary beat Cork to win their first Munster senior football title in 85 years.

Grangemockler-Ballyneale GAA club chairman Bernard Fogarty said that the day had come at last to unveil the statue after two years work.

They had big plans for the day but they couldn’t happen because of the Covid-19 restrictions.

A lot of people had helped along the way and they had a lot of goodwill from the local community.

He extended thanks to his fellow committee members and the GAA field committee; Mary Kinane from the Tipperary Development Company; Tipperary County Council and Cllr Imelda Goldsboro; Croke Park and GAA communications executive Cian Murphy, for their interest and encouragement in securing funding; Ger Ryan and the Munster Council of the GAA; the local Tractor Run and Tidy Village committees; architect Aidan Lavelle; and all the staff of Molloy’s in Callan, who had constructed the statue.