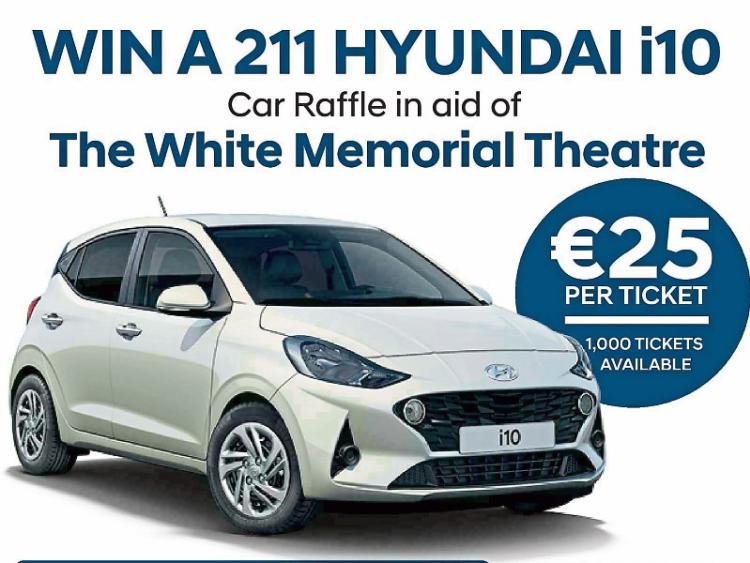 In conjunction with Barlo Hyundai, St Mary’s Choral Society in Clonmel has launched a raffle, with the prize of a new Hyundai i10 car, to raise funds for the society and the White Memorial Theatre

One sector that has been greatly affected by the pandemic has been the arts, with a number of theatres across the country shutting their doors, with many unsure as to when they would open again.

One of these theatres is the White Memorial Theatre, one of Clonmel’s oldest buildings, which dates back to 1843.

It was with great difficulty that the committee of St Mary’s Choral Society had to reach out to the people of Clonmel and its surrounding areas to ask for help.

St Mary’s Choral Society relies heavily on any income that they receive from shows and groups that rent the theatre to pay various bills such as insurance, electricity and heating costs, to name but a few.

Unfortunately, having no other option but to postpone their production of The Full Monty and cancel any events that were due to take place in the theatre in the following weeks, the doors of the theatre shut last year.

A GoFundMe campaign was set up and the response was overwhelming, with €5,000 raised by the people of Clonmel and the surrounding area to help prevent the permanent closure of the White Memorial Theatre.

One year later, and with no sign of restrictions lifting, the society has once again hit rock bottom.

The committee, realising that they needed to put a plan in place fast, contacted Paul Lyttleton, director of Barlo Hyundai, Clonmel.

Together they decided to launch a raffle for a brand new Hyundai i10 car. With only 1,000 tickets available, the raffle commenced on March 20.

The response to date has been incredible, with past and present members coming onboard to sell tickets alongside the current committee.

Within the first week almost three quarters of the tickets were sold.

Chairperson Diarmuid Vaughan commented, “by purchasing a ticket, people are literally breathing life back into the society and the White Memorial Theatre.

“Without their help and support, we would inevitably be forced to shut. We have always struggled financially but this year has really taken its toll on us. We cannot thank people enough for helping us throughout this pandemic. Without them we could not continue.”

A limited number of tickets for this raffle are still available and can be purchased by contacting any committee member, any past or present member of the society, St Mary’s Choral Society Facebook page or by emailing smcssecretary17@gmail.com

Tickets are priced at €25 each and there is no limit to the number that you can purchase. Terms and conditions apply.

The draw will take place once all tickets have been sold but it will be no later than June 5.

The draw will be streamed live via the St Mary’s Choral Society Facebook page and will be conducted by an independent observer.

St Mary’s Choral Society sincerely thanks everybody for their continued support and generosity.

And remember, if you’re not in, you can’t win.