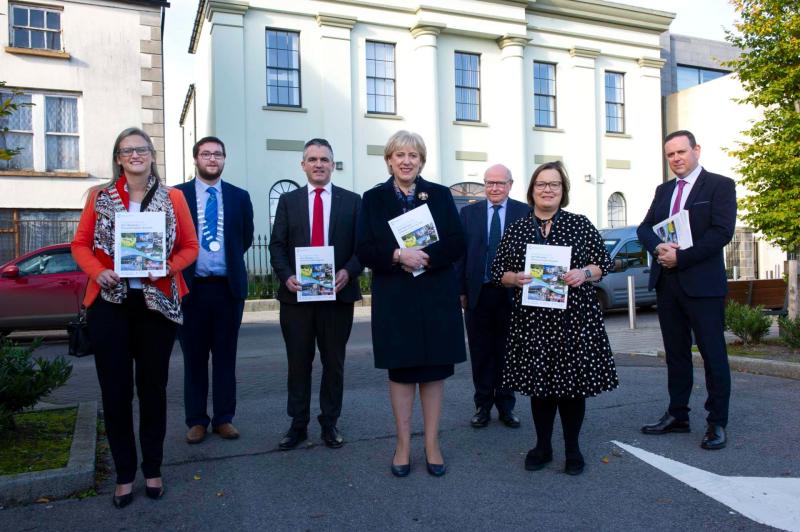 Tipperary County Council will learn around October whether its application for €17.98m funding to roll out its ambitious regeneration plan for Carrick-on-Suir town centre will be successful.
That’s what Carrick-on-Suir Municipal District’s Director of Services Brian Beck informed the monthly meeting of the District’s councillors on the day the Rural Regeneration Development Funding (RRDF) application was submitted to the Department of Rural & Community Development.
The application was submitted on Thursday, April 28, one day ahead of the deadline and in the wake of a significant breakthrough in its legal dispute with the Save Sean Healy Park Committee over the regeneration scheme proposal to develop a Blueway visitors’ car park at Sean Healy Park.
The council’s decision to omit this controversial car park proposal from the RRDF application combined with reports the local authority is in discussions with Davins GAA Club in relation to siting the car park on its property next to Davin Park means a resolution to the dispute that threatened the regeneration plan is in sight though the residents action group has yet to withdraw its High Court challenge.
The group requires a written confirmation from the council that the Sean Healy car park plan has been scrapped and a car park will never be located there before withdrawing the legal action.
At the Municipal District meeting, Mr Beck told councillors the RRDF funding application had increased to €17.98m.
He outlined that if the application was approved by the Department of Rural & Community Development this autumn, work would start on rolling out the regeneration scheme early next year.
The scheme proposes transforming the streetscape of Main Street, North Quay and the ancient lanes linking them and aims to connect the Suir Blueway at Sean Healy Park with Ormond Castle.
Upgrading of Sean Healy Park, Greystone Street, West Gate and Strand Walk are also proposed in the plan.
Among the plan’s goals is to make Carrick-on-Suir town centre more pedestrian and cycling friendly and more attractive to shoppers and tourists.
Mr Beck said a huge amount of work was involved in preparing the Carrick-on-Suir Regeneration Scheme plan and there was a great level of public engagement with the plan.
“There is a lot of thought gone into this process, a lot of ambition. I want to acknowledge the work of the consultants and teams in planning and in the District staff who have been amazing in the preparation of the plan.”
Mr Beck estimated that in the region of €30m worth of funding investment in Carrick-on-Suir was approved or the subject of funding applications at the moment including the €17.98m RRDF application, the €3m approved for upgrading the N24 running through the town, the funding approved for Carrick’s new Gaelscoil primary school and Active Travel funding approved for the Suir Blueway.
If the RRDF application is approved, it would be a “game changer” for Carrick-on-Suir, he said.
“It would position Carrick-on-Suir very strongly in tourism and enterprise for the next generation and generations to come.”
Mr Beck added that his “fingers were crossed” in relation to the Minister for Rural & Community Development’s announcement in October.
Carrick-on-Suir MD Chairman, Cllr Mark Fitzgerald, echoed Mr Beck’s hope the RRDF application for Carrick-on-Suir will be successful and his tribute to hard work of all the team involved in this project.
Cllr David Dunne congratulated everyone involved in the regeneration scheme for their work and welcomed the news of an impending resolution to the issues people had with the project and for which they “fought the good fight” over.
He said huge work went into the regeneration plan and there was huge consultation with the public over it.
He hoped the regeneration scheme, if approved funding, will be “the catalyst to drive Carrick-on-Suir on for the next 100 years. It will benefit everyone from Carrick-on-Suir”.
Cllr Kieran Bourke, who is involved in the Save Sean Healy Park Committee, said while there was a part of the regeneration plan he didn’t agree with, he understood it would be tweaked. In view of this, it was great that the RRDF application was being submitted and he hoped it would be successful.
If granted funding, it would be a fantastic investment and “game changer” for the town, he added.

Also read from last week's edition of The Nationalist: