The Nationalist's first edition in 1974 - what made the news in Tipperary! 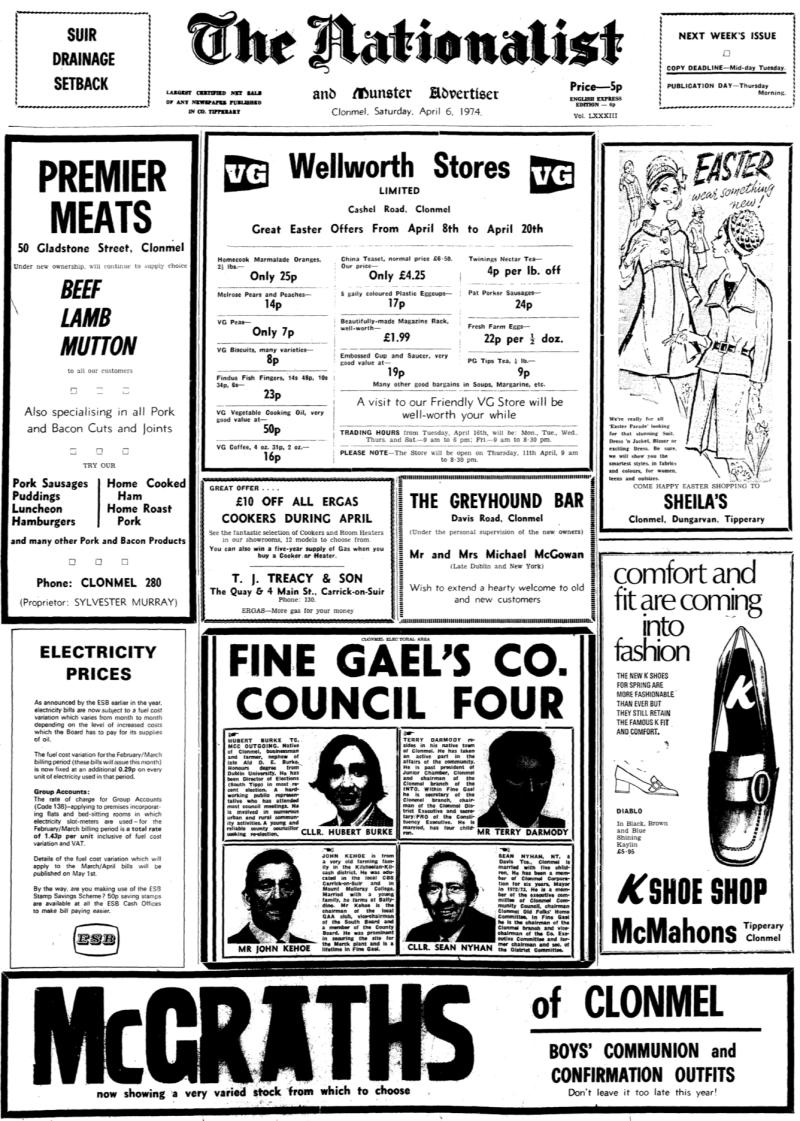 The first edition of The Nationalist when we moved to Queen Street in 1974. How life has changed in Tipperary and beyond.

Tempus fugit, and if you ever needed proof that it does, a browse through an old newspaper anytime will prove the point.
On page 38 is a reproduction of our front page from April 6, 1974, the first edition of The Nationalist compiled on Queen Street after our move uptown from Market Street.
Our broadsheet papers then hit the streets on Thursday mornings and a copy of The Nationalist 48 years ago cost 5p - it was the period in the country’s history after decimalisation but a few years still before the introduction of the Euro.
We didn’t carry news on our front pages then and Wellworth Stores on the Cashel Road in Clonmel was the headline advert. That whole Cashel Road complex has been hugely redeveloped since then and Wellworths are no longer there. Other front page advertisers that week were Premier Meats, Sheila’s, and McGraths of Gladstone Street, all now gone. But “The Greyhound Bar”, Davis Road, then under the ownership of Michael McGowan, is still trading, even if it has changed hands a couple of times since.
Inside on page 2 the news began - that week Clonmel Golf Club was summoned by Waterford County Council for unlawfully carrying out development work for which permission was required. Justice Carroll imposed a fine of £8 and allowed £12.50 expenses.

From Cashel we reported that “the unmannerly practice of scribbling on walls and private property occurred again last week when a number of places were defaced with some hideous inscriptions, one corner house in particular covered by the irresponsibles. The pleasure those people get from such acts only indicates their low mentality. It only belittles our town and it is therefore hoped that those who engaged in this unwanted depredation will refrain from doing so in the future”.
Then again, the more things change, the more they stay the same - if it wasn’t called graffiti then, it is today and it still is a big problem.
Over in Emly, two publicans (we won’t name names) pleaded guilty at Tipperary Court to breaches of the licensing laws on Sunday, January 13.
One was fined £6 arising out of a raid on his premises at 11.25pm when 13 persons were found there. When told that one of the 13 was a woman with her husband, the Justice, BJ Carroll, dismissed the case against the woman stating that she “could hardly go home without her husband”. Six of the men were fined £2 each; six others in court, or represented, were fined £1 each, the Justice remarking it would cost at least £1 to come to court - if not more.
The second publican was fined £3 for a similar breach when eleven persons were found on their premises. Supt Peter McGing said that those customers were deeply engrossed in a game of cards around the fire in the kitchen and he firmly believed that there was more concentration on the cards than on drink.

On the employment pages it seemed we still had a way to go with gender legislation.
Padmore & Barnes, Shoe Manufacturers at Nelson Street, Clonmel were looking for “Male Workers”. Five Star Supermarket on O’Connell Street, Clonmel required “Two Young Ladies”. The ideal girls would be pleasant, very nicely mannered, clean and tidy and most importantly have a happy face (not an emoji) for our customers at all times. The position offered a progressive salary, three weeks’ holidays, five-day week and canteen facilities.

But perhaps the biggest changes of all in the past half century have been in the whole entertainment and social scene as evidenced by a glance at the 1974 entertainment pages. Most if not all of the venues have disappeared from the landscape, including cinemas, dance halls, carnivals, supper/ dances, etc.

Amongst the cinemas were the Regal Theatre and Ritz Cinema in Clonmel, the Rock in Cashel, the Regal in Cappamore, the Aherlow in Tipperary Town. Included in the dance hall venues now part of history were the Tower Ballroom, Tipperary, Golden Vale, Dundrum, the Oyster Ballroom, Dromkeen, the Collins Hall, Clonmel and the Clonmel Arms Hotel.
Other blasts from the past venues were: Silver Sands, Hide A Way, Caroline Bar, the Bally-Hy, the Golden Thatch, the list goes on.

Also that week the Arch Bar, Irishtown, Clonmel, were advertising the Eurovision Song Contest in “Colour” in the lounge (which Abba won). We certainly had “All kinds of everything” back then.