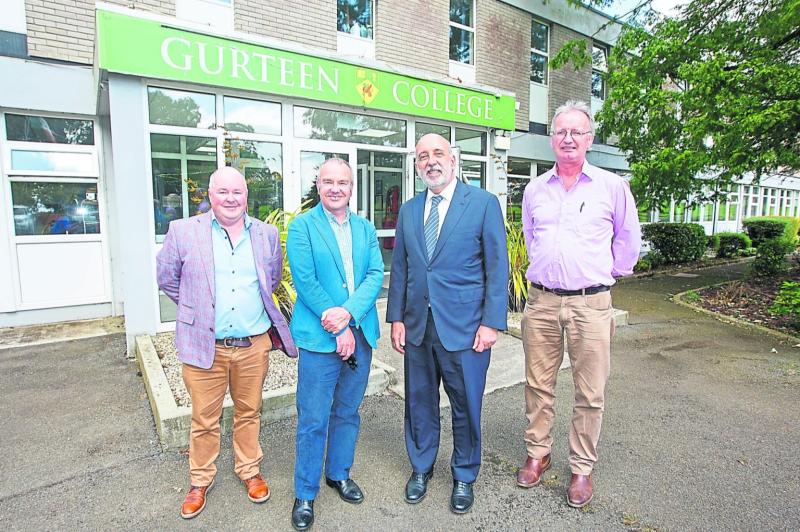 Ollie McLoughney, Finance Manager; Jon Parry, principal and Roy Kingston, Chair of the Governors of Gurteen College with Governor of the Central Bank of Ireland Gabriel Makhlouf during a visit

The Euro is a solid currency but beware of buying into cryptocurrencies such as Bitcoin, the Governor of the Central Bank of Ireland Mr Gabriel Makhlouf has warned during an interview with the Tipperary Star in the Anner Hotel in Thurles.

Mr Makhlouf was in town last Wednesday meeting local businesses and school students and discussing how issues like the economy and the labour market are affecting them.

Soaring inflation means householders have less in their pockets for groceries, food and fuel, meaning some people are having to choose between paying the electricity bill or doing the weekly shopping.
What can Ireland do? “We import our energy, by and large, so to a certain extent, we’re just takers of whatever the price is,” says Mr Makhlouf.

“We know the price has gone up for two main reasons, the shock created by the war in Ukraine, although some energy costs were going up before the war, because of bottlenecks created out of the pandemic.” The global economy, not just the Irish one, came out of it to recover pretty well. “But the supply of basically everything couldn’t keep up with the demand and we’ve seen that in energy.

“The war has made it worse so our prices are going up. The European Central Bank is going to fix this problem of inflation - a part of the way of doing that is by putting up interest rates to reduce demand. So that’s the big picture.”

In Ireland, rural and poorer households tend to be the ones that are impacted the most by this inflation as they spend more of their income on energy and fuel.
“If there’s going to be support and help, it needs to be targeted on those groups,” says Mr Makhlouf. “Targeted support is the main thing.”

Cashel and Templemore have seen the closures of small bank and post office branches. There was fury this week at the removal of ATMs from towns across Tipperary.

How will that affect the nature of banking in rural Ireland? “I think the banking industry is in transition. What we’re seeing from consumers is that they actually prefer to use electronic banking.

“The demand for using branches has fallen. I don’t know how long this transition is going to last. At the end of the day, banks are commercial entities. If they can’t be run commercially, then they shouldn’t exist. Although they play a very big role in the economy.

“What’s important is that banks themselves think about customers’ needs when they are making decisions about an individual branch.”
This is an issue that affects the whole world. During his time in New Zealand, Mr Makhlouf said they faced “exactly the same” issues in rural communities.

“I know they’re piloting something in New Zealand: that the banks come together and actually co-locate and merge their costs, so big areas of the country don’t have no branches. I think innovation and creativity are some of the things that need to be put into action. But saying that no branches should close, makes no sense. Consumers are voting with their feet so banks have to respond to that.”

Will older people who aren’t tech-savvy or those with no internet access be left behind in the new era of digital banking?
“That can’t be allowed to happen. To be fair to a lot of older people, they do know. Let’s not immediately jump to the conclusion that anyone who is old has no idea.

“But I think that’s absolutely an issue, that providers of financial services need to be thinking about. Everyone is entitled to have a bank account and to be able to access it and use it.

“If we’re moving into a technological age: personally I think in the shorter term we’re going to have a mix of bricks and mortar branches, but at some point we will have fewer branches, but by that time, a generation who is maybe not old at the moment but who are very tech-savvy, will be able to manage.
“But certainly nobody should be excluded from being able to use financial services just because they’re not familiar with technology.”

Bitcoin and cryptocurrencies are increasingly popular - what advice would Mr Makhlouf give to anyone considering investing in that world?
“I’m incredibly wary about it. Firstly, there’s a range of stuff in crypto, so we shouldn’t all pretend it’s all exactly the same. But in my view, I think if you’re going to put your money into some crypto products, you need to be prepared to lose it.

“For something to be a currency, a money, it needs to be a store of value, a means of exchange, a unit of account. None of those things actually are reflected. So I’m incredibly wary. There is crypto which is tied to real money, and that has greater value than other crypto.
“What’s the ‘value-add’ of crypto? Why are you putting your money into that, really? My impression is that a lot of that stuff has no underlying value at all.”

The Euro at 20
Croatia is to be the 20th country to join the Euro next year, and there was dollar-euro parity on currency exchanges as Mr Makhlouf visited Thurles.
Where does the Governor see the Euro going next, after 20 years of existence? “The Euro is a global currency. Its internationalisation is growing. More and more of the world is using it. The Dollar will remain powerful as a global currency but the Euro is the currency of a few hundred million people.
“So it’s a pretty solid currency!”