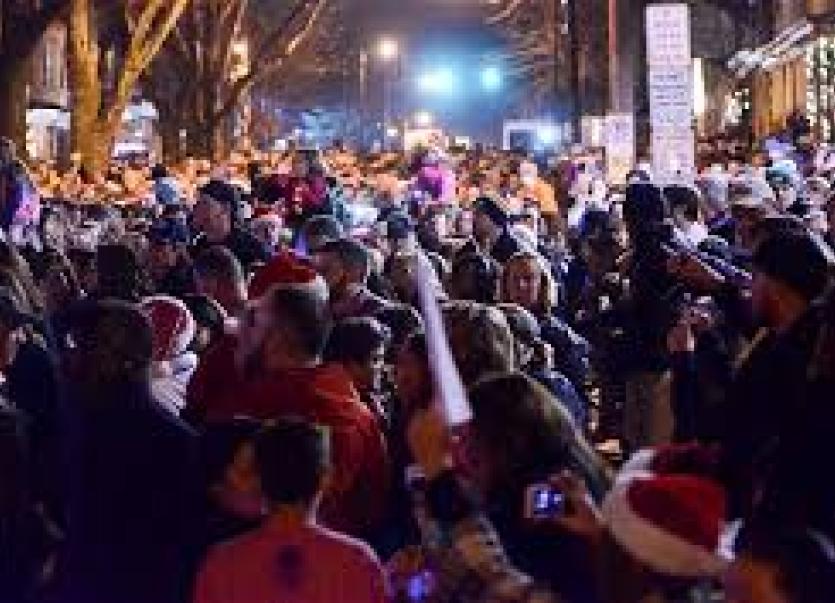 Crowds will gather to hear The Monks

For over two decades the multi-talented and jolly Monks Carol Singers have been in harmony to bring the spirit of Christmas to Thurles.

They are familiar figures outside Tesco or AIB annually at this time of year and they entertain the populace with perennial Christmas favourites.

This year is no exception and Peter Lanigan of the group said that the response has always been heartening. The group will be on duty again this December 14, 16, 20 and 23.

The group have a very full repertoire, ranging from Blue Christmas and Silent Night, The First Noel and Deck The Halls With Holly and Rocking Around The Christmas Tree to Go tell It On The Mountain and White Christmas, Jingle Bells and Rudolf, the Red nosed Reindeer and, of course, Fairytale of New York.

Peter Lanigan, Moyne Road, of the Monks Carol Singers (Musical Director), who is a regular vocalist at the weekly Monks traditional night on Wednesdays was absolutely delighted that kind folks are supporting them so brilliantly and he thanked in particular, Declan O’Sullivan of Star Systems for his amplification so that they can be better heard in Liberty Square.

Gifted harmonica player, Vic Heywood, who worked in Lisheen Mines, which has had strong representation on the Monks line-up, as usual kindly prepared the books of carols for the group who are always taking in new members and Vic did a lovely job on the books which have a Christmas aspect about them to enhance the happy and colourful mood of the season of peace and joy, said Peter, who is himself renowned for his singing of Patrick Kavanagh’s Raglan Road and other popular ballads.

Traditional music has been played for well over 25 years on a Wednesday night in the Monks hostelry, Thurles, and many great musicians and singers, have graced these nights regularly over the years.

Eoghan O‘Neill from Rosegreen area and who played with Moving Hearts and Celtic Women and on Mick Hanly’s cd, Homeland, is no stranger to the Monks on his nights off in Ireland. And former Republic off Ireland striker, Niall Quinn, has visited the Monks.

His sister, Annemarie Dwyer, is one of the Monks Carol Singers.

It is all thanks to Michael O'Gorman (“The Monk”) and his family who embraced the music on his return from Dublin to take over the running of his family's pub, O'Gormans of Mitchel Street, Thurles.

Michael's hospitality to all local and visiting musicians is hailed as unique in many ways and for this he is to be congratulated as it sets the image of our town for the many visitors from all over the world to Thurles, who enjoy the Wednesday night session as an integral part of their visit.

Ciaran Hanrahan recorded his first Ceili House, ably assisted by Pat Costello, from the Monks and Ciaran still uses parts of the script for that night in some of his present day Ceili House recordings. To raise money for the Guardian Angel School a tape was recorded live at The Monks and then, following on from that, a C.D. was recorded Ag Cuardaiocht ag an Monks.

Then there was the night with the D'Unbelieveables, Pat Shortt and Jon Kenny, One of the proudest people there on that night was long serving Wednesday night musician, Pat's dad, Christy, now a fine tin whistle player. This was recorded in conjunction with a programme being compiled for television about Pat and John's native towns and their association with the goings on in them.

People came from far and wide to enjoy the craic on the night.
When the last County Fleadh Cheoil was held in Thurles the Monks hosted many singers and musicians from around Tipperary and beyond.