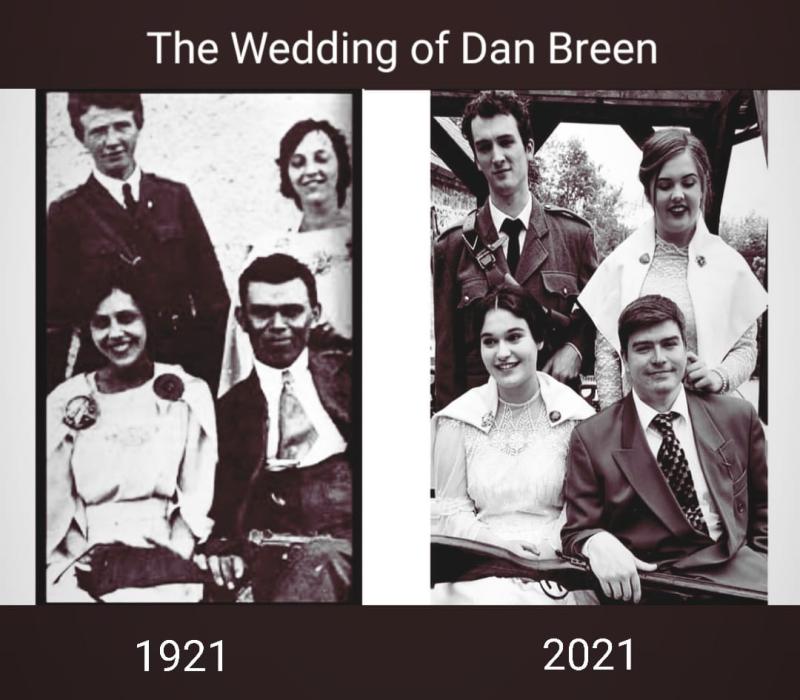 LEFT: The wedding of Dan Breen to Brigid Malone at Glenagat House in New Inn on June 12, 1921. RIGHT: The 2021 re-enactment in the film which can be seen on Culture Night at the Excel.

Culture night in Tipperary Town will be a special occasion indeed this year, with the showing of an iconic film re-enactment of the wedding of Dan Breen and Bridget Malone over a hundred years ago.

The filmed black and white production is twenty minutes long and will be screened at Tipperary Excel Centre along with a lecture by Dr Denis Marnane on the effects of the Truce locally.

This re-enactment depicts one of the most iconic moments in the War of Independence when the wedding of Dan Breen (a wanted man with a price on his head of a thousand pounds) married Bridget Malone at Glenagat House outside New Inn on June 12, 1921 within a five mile radius of Cashel, Cahir and Fethard where the military were stationed) as the War of Independence raged.

The threat of capture and death was real, but there was the excitement and daring of the event itself in the face of the enemy.

The re-enactment is historically correct and is greatly enhanced by the narration which set the historical context of the time...the ongoing guerrilla war with severe casualties on both sides and the announcement of the Truce a month after the wedding and mention of the bitter Civil War to follow, though those were “unknowns” at the time.

The opening narration takes place at the original farmhouse now in ruins, when local actor Jimmy O’Farrell sets the scene for the events about to unfold.

Jimmy O’Farrell, who not alone was the narrator for this re-enactment but supplied his 1915 vintage car to add to the setting.

The wedding is filmed at Ballyglass House Hotel a couple of miles from Tipperary Town. The location proved perfect for shooting scenes such as were required to make the film authentic. Local actors dressed in 1920s costume along with the vintage car and an ancient bicycle for the curate to arrive on completed the set.

The story is told from the perspective of Mrs Purcell in whose house the wedding is taking place, a staunch Republican as is her sister Mrs Looby where the Garden Party will happen later nearby Miltownmore.

The film portrays the courage and defiance of all concerned knowing as they do that the arrival of the Tans would have disastrous consequences for everyone, especially Dan Breen and Sean Hogan.

This project was funded by Tipperary County Council through the Decade of Centenaries for Tipperary Excel.