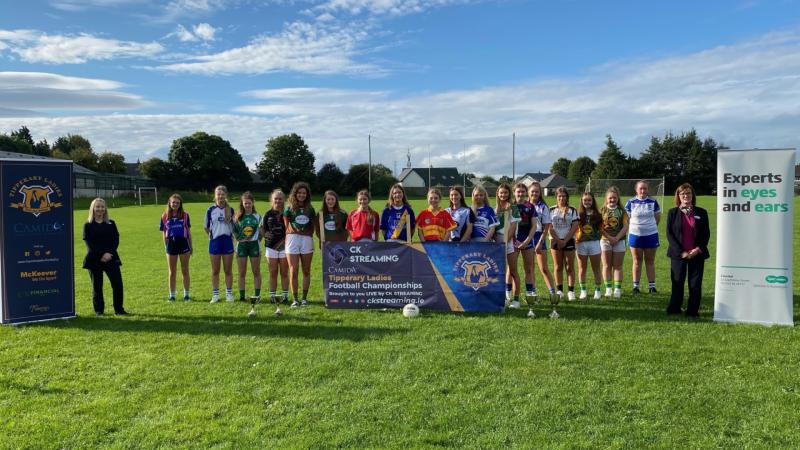 A feast of football will take place in Tipperary this weekend with the Tipperary Ladies Football Specsavers U-16 County Finals down for decision.

In total 8 finals will be played over 4 separate venues this Saturday and Sunday with 5 of the 8 games being broadcast live in association with CK Streaming.

The action gets underway on Saturday afternoon at 1pm in Sean Treacy Park with the A' Final between Boherlahan-Dualla and Moycarkey-Borris and finishes on Sunday in Littleton when Mullinahone take on Thurles Sarsfields in the C' Final at 4pm.

Two young teams taking part in this game with Rockwell on a high after qualifying for the U-14 B' Final last weekend with victory over Brian Borus and a lot of these players involved in that win. This is Fethard's second team made of mostly U-14 players and used as development as the club look to lay foundations for the future so reaching a final is an added bonus for the club. Going on the performance of some of Rockwell's players in their U-16 semi-final win slightly tips the balance in their favour.

Two clubs putting in huge work at underage level sees them meet in this game in New Inn. Golden- Kilfeacle who were formed in 2018 are making huge strides with a great backroom team in place.
Clerihan beat Templemore by 5 points in their semi-final while Golden overcame Rockvale Rovers in a dramatic game on a scoreline of 2-7 to 3-3. This game could go either way with Golden getting a slight edge.

Pat's will come into this game on a high after their super win over Ballyporeen in the semi-final. Aherlow will provide stern opposition and it definitely promises to be a close game. Both teams are doing a huge amount of work at grassroots level and have players who will backbone the club for years to come. A slight edge for Pat's in this one but don't be surprised to see an Aherlow victory.

Usually when you hear Mulinahone vs Sars you automatically think of the great battles in Senior Hurling between the teams but the fact that these two will also meet in the U-14 Final next week shows the work going into these two clubs. Mullinahone are currently on a high with teams at all grades performing well while Sars who were promoted to senior ranks last year after winning the intermediate, has seen the club grow. Thes game has the potential to be the game of the weekend and after a titanic struggle Sars could tip the edge.

Cappawhite await the winners of the Cahir/Commercials clash so should be the fresher coming into this game. Cahir and Commercials battle it out on Tuesday evening to see who advances to play Cappawhite and with that game looking like it could be a real humdinger the fact that Cappawhite have the extra 2 weeks rest will see them as favourites in this game.
Verdict: Cappawhite

The battle of the Rovers in New Inn sees two very attacking teams going head to head. These two met in the opening round of the championships in Monroe back in July and Galtee managed to win out on a scoreline of 4-10 to 2-11 with two goals late in the day proving the difference.

Moyle Rovers have regrouped well after that opening day loss and were very impressive in their semi-final victory of Moyne-Templetouhy while Galtee managed to edge a thriller in Duneske with a one point victory of Ardfinnan.

Moyle will look to attack from their half-back line with Ellie Franklin and Sarah Luttrell moving up and down the wings knowing Mia Cahalane will mind the house from centre-back. The likes of Anna Phelan, Maeve O'Callaghan and Alannah Hogan will have a huge job pinning back Moyle Rovers half-back line.

Moyle Rovers will interchange Ava Wall and Eabha Dolan from the half and full-forward lines and both are capable of running riot given space but the likes of Keeva Bailey-Moloney, Grace Hayes and Katelyn O'Dwyer are well capable of closing down that space.

Jenny Ryan has been impressive all year for Galtee at full-forward and if Anna Keane and Molly Keane can get on top in the midfield battle with Aedin McCormack and Hazel Brennan and provide quick ball into towards Ryan Galtee could be in business.

Both sides are big scorers so this could come down to which defence holds the opposition attack best. Don't be surprised to see this game go the distance.

That fact that these two teams will meet in the plate final shows the quality that has been in the championship this year. Holycross beat Templemore in the opening round of the championship but it was an early goal that proved the difference that evening.

Templemore will be looking to Orlaith Treacy, Tara Hoare and Shona McBride to steer them to victory but Holycross will look to the likes of Izzy Carr, Kate Carr and Grace Fitzpatrick-Ryan to take the battle to Templemore.
This looks like being a humdinger with a hesitant tilt to Holycross.
Verdict: Holycross-Ballycahill

Without doubt the game everyone wants to see. Both teams were involved in never to be forgotten semi-finals with Moycarkey grinding out a super victory over Arravale Rovers while Boherlahan scraped over the line thanks to an unbelievable score by Anna Murphy at the death to overcome Fethard.

Moycarkey showed typical doggedness in their game against Arravale trailing 1-5 to 0-1 after 10 minutes but hung in the game and went in front for the first time in the 63rd minute when Ciara Shelly hit a bullet of a goal which in certainly up there with one of the greatest goals ever seen.

Boherlahan looked in trouble early in the second half when 9 points down against Fethard but eventually hit the front before the water break and despite Fethard hit back to level deep in stoppage time before Murphy's heroics to win it.

This could be a game won on the sideline with the match ups being the key. Do Moycarkey isolate Aoife and Ciara Shelly inside in the full-forward line in the hope of getting quick ball into them? If this happens will Boherlahan drop the likes of Emma Horgan back to play in front of the full-back line?

Boherlahan will look to isolate Anna Murphy inside in their full-forward line against Caoimhe Fitzgibbon who done a relatively good job on Ciara O'Hora of Arravale but you've got to think that maybe the likes of Sarah Corcoran will come deep from her half-forward berth to play a role to block of that supply.

The midfield battle is going to be key here with Kate Ralph and Alisha Kearney of Moycarkey and the Boherlahan duo of Kate Fercombe and Emer Dwan both well capable of going forward to kick scores.

Boherlahan look to have the better balanced team but one can never write off Moycarkey and if they show the same never say die attitude as in their semi-final victory they could easily be looking at victory.

If Moycarkey can stay in the game with 10 minutes to go you've got to give them every chance and that 'The Red and Yellow are never beaten' attitude gives them the slight edge.

Five of the eight games will be shown live on CK Streaming's YouTube Channel and there will be updates from the other venues.

These matches are a ticket only event and buying a ticket for €10 will allow you entry to any/all final games this weekend.

Community facilities across Tipperary are supporting students to do college remotely