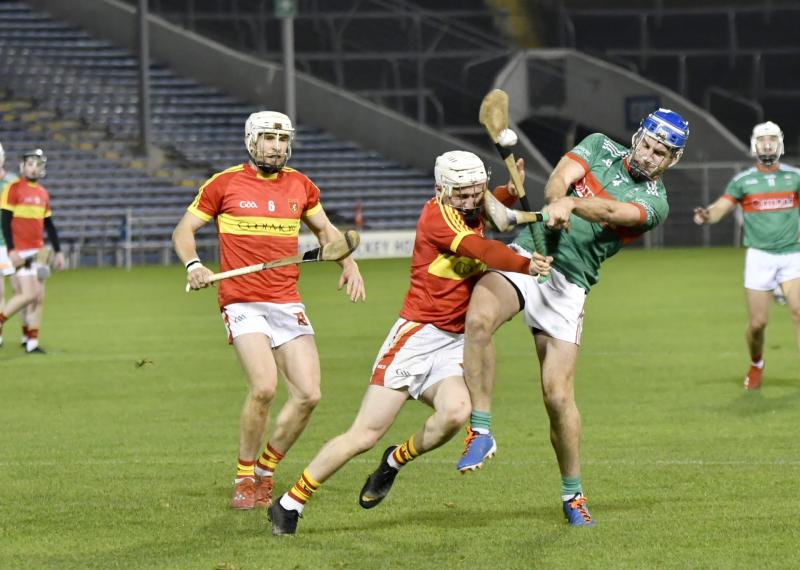 Loughmore/Castleiney, with some comfort, saw off the challenge of Killenaule to secure easy passage into the county senior hurling championship quarter finals last Friday evening.
Under the lights in Semple Stadium Loughmore cruised to a fifteen point victory with a dominant display against a Killenaule team that will be severely disappointed that they failed to make this a more competitive fixture.
The winning margin in no way flatters Loughmore as they were much the stronger team throughout, completely dominating all over the field.
Loughmore exerted an early grip on the game and while they held a nine point advantage at the break it was felt that another goal for Loughmore would kill the game as a contest.
While Killenaule rallied at the start of the second half and enjoyed their best period their improvement was not sustained.The south team scored three in a row but Killenaule responded powerfully picking off two points and that killer goal came ten min utes into the second half.
It was a stylish move as well as it caught the Killenaule rearguard too far advanced up the field which left acres of room for Noel McGrath to attack the goal once he collected the clever handpass from Ciaran Connolly which was delivered so quickly and accurately it took out most of the defenders from the equation.
McGrath was not going to be caught and he raced clear on goal to deliver a fine finish with at least four defenders chasing him down in vain.
That goal provided Loughmore with a comfortable winning margin of eleven points just ten minutes into the second half.
From that point on both teams were just going through the motions, the benches were emptied on both sides and from a spectator point of view the remaining twenty minutes will not live long in the memory.
The south team were blown away by Loughmore from the very start. Loughhmore had registered six points before Killenaule scored their first score after a quarter of an hour from Mark Stakelum.
It was the first time in the game that a Killenaule player had managed to avoid the blocks and tackles of the hard working Loughmore defence who n ever gave their opponents a chance to settle.
Killenaules efforts early on were way off the mark, down to the harassment meted out by the Loughmore defenders in their tenacious bid to close down the forwards but some of the chances Killenaule worked so hard to get in th t opening quarter should have been availed of.
A quarter of an hour the story could have been much worse for Killenaule were it not for the excellent reaction of Jonathan Gleeson on the goal.
Gleeson somehow managed to pull off a remarkable save from Brian McGrath as he deflected the ball over the bar for Loughmore’s sixth point in a row in a blistering opening for Loughmore.
After Mark Stakelum scored Killenaules opening point after fifteen minutes Loughmore continued to go about their business in an efficient manner.
Liam Treacy, who picked off lovely scores throughout , pointed before Ciaran Connolly set up John McGrath for a well taken goal to stretch Loughmores lead out to 1-7 to just a solitary point twenty minutes in t o the game.
That nine point margin remained intact at the half time break with two Killenaule frees scored by Ciaran O’ Dwyer cancelled out bny scores from John McGrath and Liam Treacy.
Killenaule in fairness did show an improvement from the start of the second half but it was short lived.
Ciaran O’ Dwyer scored a point from play and a free before Bubbles O’ Dwyer scored his first score of the game six minutes into the second half.
The lead was down to six points but i t twas as close as Killenaule managed to get to Loughmore.
Loughmore pressed on to kill off the game and that they did with John McGrath and Ed Connolly picking off points before Noel McGrath struck with the goal ten minutes int o the second half to finish off the game.
After that the game resembled a training ground exercise with both teams minding themselves for the challenges that lay ahead.
LoughmoreCastleiney; Aidan McGrath, Willie Eviston, Joey Hennessy, Tomas McGrath, John Ryan, John Meagher, Brian McGrath, Lorcan Egan, Tommy Maher, Liam Treacy, Ciaran Connolly, Noel McGrath, Liam McGrath, John McGrath , Evan Sweeney
Subs. Ed Connnolly for Joey Hennessy, Conor McGrathh for Evan Sweeney, Anthony Ryan for John Meagher , Ciaran McCormack for John McGrath.
ScorersJ ohn McGrath 1-6,Noel McGrath 1-2,Liam Treacy 0-3,Ed Connolly 0-3,Evan Sweeney 0-2,Liam McGrath 0-2,Conor McGrath 0-1,Tommy Maher 0-1
Killenaule Jonathan Gleeson, Jack Hassett, Paddy Codd, Killian O’ Dwyer, Jimmy Feehan, Joe O’ Dwyer, Liam Meagher, Tom Stakelum, Eoin O’ Connell, Ciaran O’ Dwyer, John O’ Dwyer, Kieran Bergin, Michael Doyle, Dean O’ Connor, Mak Stakelum
Subs Eoin Shaw for Kieran Bergin,Darragh Fitzgerald for Dean O’ Connor, Daniel Guinan for Liam Meagher, Kevin Prendergast for Ciaran O’ Dwyer, Gus Browne for Michael Doyle
Scorers Ciaran O Dwyer 0-6,John O’ Dwyer 0-2,Eoin Shaw 0-2,Daragh Fitzgerald 0-1 Mark Stakelum -0-1