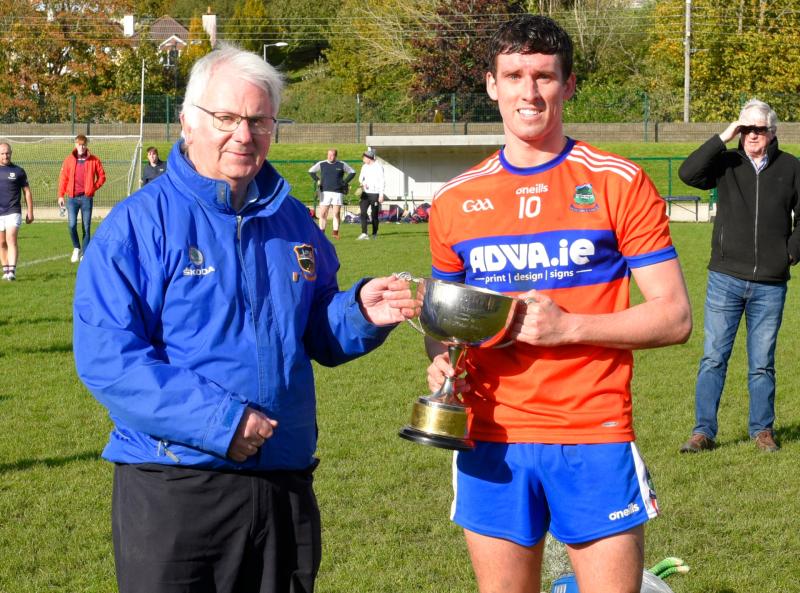 On Bank Holiday Monday , Skeheenarinky produced a storming final quarter to ensure a thoroughly deserved victory in the South Tipperary Junior ‘A’ Hurling Championship final against Ballingarry at Clonmel Sportsfield.
Up to that point it was anyone’s game, the pendulum swinging both ways over the hour. Skeheen’ looked likely winners at half-time with a six points cushion at 1-9 to 1-3, but seven unanswered points at the start of the second half put Ballingarry in front for the only time. With all the momentum and the wind at their backs it seemed probable at that juncture that the title was heading back Slieveardagh way. However, two rapid-fire points from Tommy Sweeney and Darragh Brennan steadied a shaky looking Skeheen and the sides went to the second half water break at 1-11 apiece with the game in the proverbial melting pot.
The game’s decisive score came immediately after that second ‘sos uisce’. Darragh Brennan’s delivery was won by the hugely influential Thomas Vaughan 30 metres from goal. With a lot of work still to do the full-forward advanced and gave David Cashin no chance with a shot into the bottom corner. From there on Skeheen held the whip hand and drove on to ultimate victory.
Playing their second game in less than 48 hours (Ballyporeen lost to Moyle Rovers in senior football on Saturday), Skeheen started well with two points inside two minutes from Darragh Brennan and Tommy Sweeney with a classy over-the -shoulder effort.
Ballingarry’s first score was from a 65 converted by Philip Ivors whose initial shot at goal was superbly saved by Aidan Treacy at the expense of the 65.

The victorious Skeheenarinky team with mentors and mascots celebrate after the South Junior A Hurling Final win over Ballingarry at Clonmel Sportsfield on Monday afternoon. Pic: Michael Boland

The game's first goal arrived in the fifth minute, John O’Callaghan and Dean Finn involved in the preparation work before Adrian English finished excellently to the net for the Ballyporeen parishioners.
But hopes of building on that four points advantage dissipated quickly when Philip Ivors goaled in the 10th minute from a tight angle after winning Donal Shelly’s fine delivery into the danger zone.
Soon the sides were level at 1-2 apiece, Ivors again on the end of another Shelly ball to point for parity.
Darragh Brennan then drove over a huge point from half-way to edge Skeheenarinky ahead before Philip Ivors picked himself up off the ground following a knock to tie it up again after 13 minutes of play.
By the first half water break Skeheen were two to the good, 1-5 to 1-3, following a point on the run and a free, both scored by Thomas Vaughan.
The third quarter was all Skeheenarinky with four unanswered points from Thomas Vaughan (2, one free), Dean Finn and Darragh Brennan. But credit for a lot of this came from some great work from the half-back line of Noel Vaughan, Riain O’Callaghan and the excellent Oisin Brennan who recovered from his injury against Moyle Rovers. 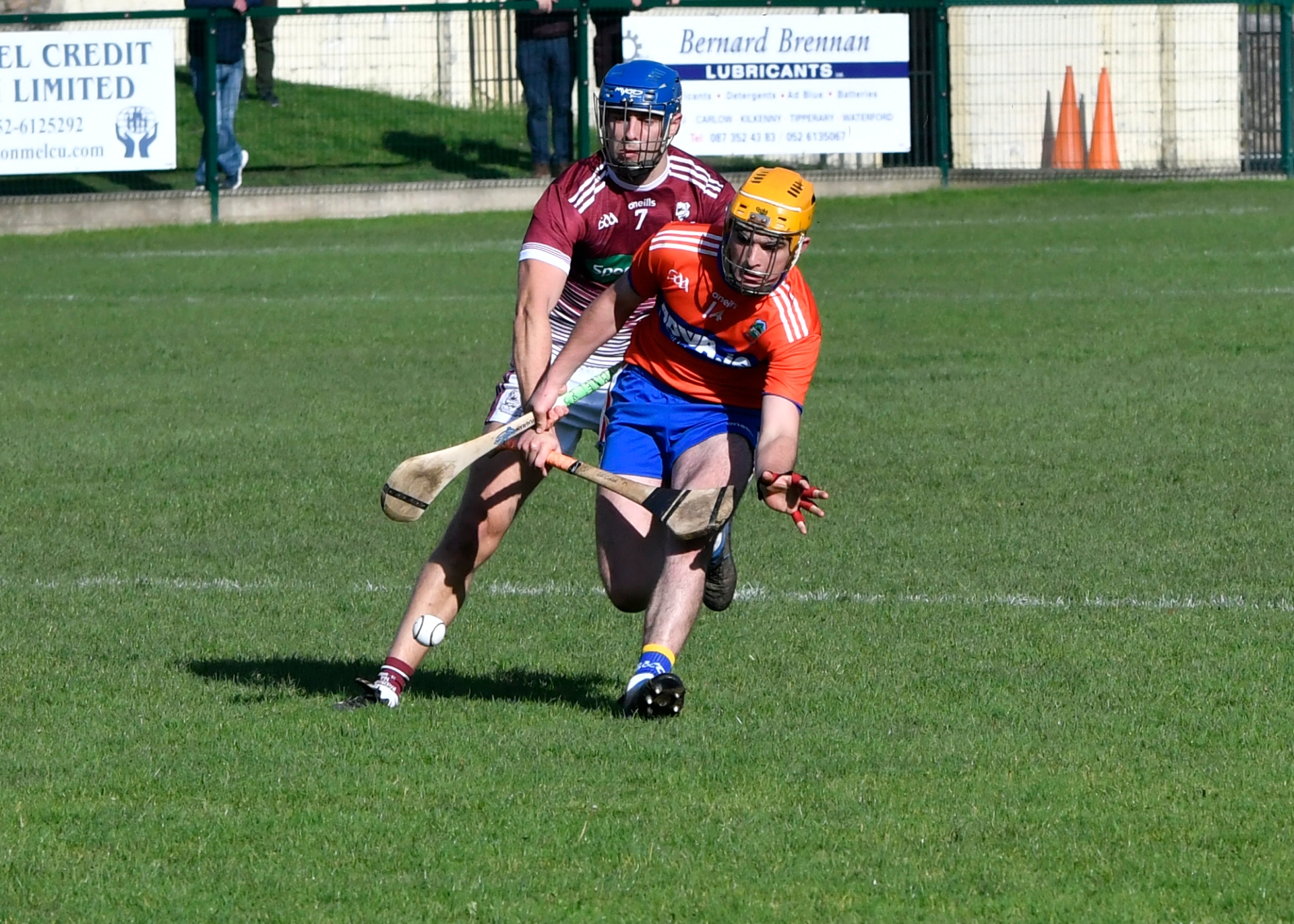 Ballingarry emerged like a different team for the second half and rattled off seven points in 10 minutes to catch and head Skeheenarinky and a betting man would have leaned their way at the stage.
Philip Ivors’ early free was quickly followed by a brace from midfielder Donal Shelly before another Philip Ivors’ placed ball left the score at 1-9 to 1-7 after just seven minutes of second half hurling.
And when a rousing three Ballingarry points in three minutes followed- all long range efforts - from Shane Cleere, Sean Ryan and Shelly again, Ballingarry had the lead for their first and only time and were definitely getting on top it appeared.
The next two points, from Tommy Sweeney (from a very acute angle) and Darragh Brennan, were so badly needed to halt the Ballingarry bandwagon and give Skeheen renewed belief and they helped immmensely in that regard.
Thomas Vaughan’s precious 49th minute goal put his side three points clear and suddenly the tide had switched with John O’Callaghan getting more on top around the middle, his powerful running earning a free to put his side four ahead.
Seven minutes from time Ballingarry were reduced to 14 men with the red carding of Michael Dunne before Thomas Vaughan delivered another hard earned point for the eventual winners.
Skeheenarinky: Aidan Treacy, Seamus O’Callaghan, David Hyland, Eoin Morrissey, Noel Vaughan, Riain O’Callaghan, Oisin Brennan, John O’Callaghan, Dean Finn (0-1), Fionán O’Sullivan, Tommy Sweeney (0-2), Conor Sweeney, Adrian English (1-0), Thomas Vaughan (1-6, 0-3F), Darragh Brennan (0-4).
Subs: Padraig Fitzgerald for Dean Finn (47 minutes); Harry English for English (61); Mikie Maher for T. Sweeney.
Ballingarry: David Cashin, Thomas Pollard, Dickie Norton, Conor Mangan, Sean Ryan (0-1), Keith Cleere (0-1), Thomas Walton, Donal Shelly (0-3), Eamonn Corcoran, Jamie Walsh, Gerry Fitzgerald, Matthew Butler, Shane Cleere, Philip Ivors (1-6, 4f, 1x65), Daniel Lyons.
Subs: Michael Dunne for Lyons (25 minutes); Seanie Cahill for Butler (39); Mickie McGrath for Ivors (inj., 56).
Referee: Philly Keane (St Patrick’s).