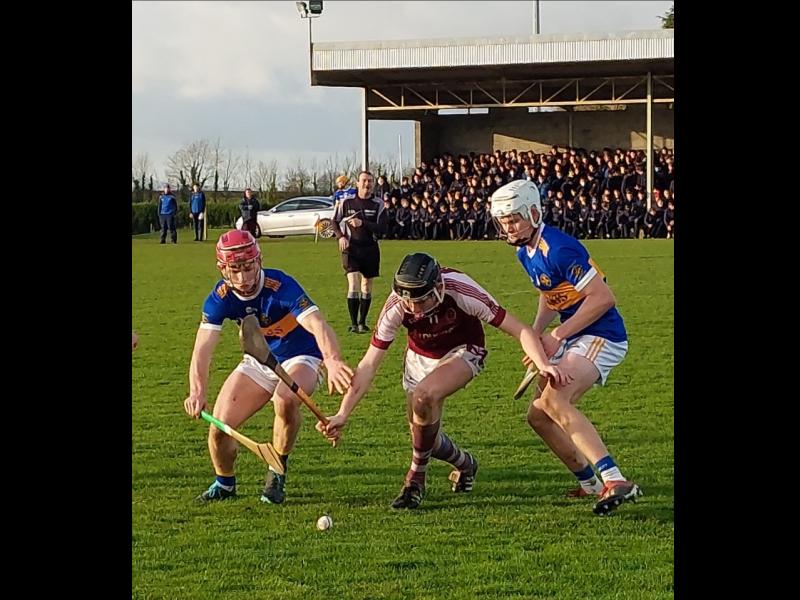 Thurles CBS booked their place in the quarter-finals of this year's Dr Harty Cup after an easy and convincing win over Our Lady's Templemore in Littleton this afternoon.

A tight first half between the sides made this game interesting for some 25 minutes, but Thurles showed their class in the second half, outscoring their opponents by 2-7 to 0-3 to canter over the line and make it two wins in succession after defeating St Flannan's in the first round last week.

Templemore battled hard in the first half but they didn't have the answers to the class that Thurles has at their disposal and made their exit from this year's competition.

After a Ciaran McCormack free in the first minute gave Thurles the lead, it was his name sake Paddy who equalised soon after to get the contest's scoring off and running in freezing conditions in Littleton.

Jimmie Lahart sailed over a lovely score after three minutes before Ciaran McCormack finished very well over the shoulder to give Thurles a two-point lead.

Frees were the main scoring outlet throughout the game for Templemore with Paddy McCormack - brother of Tipperary senior hurler Dan - impressing from the placed balls in a clinical display, as he had the sides level with two more by the 13th minute at 0-3 apiece.

Thurles were creating more scoring opportunities in general, and should have really been in the lead, but some poor shooting let them down but they did re-take the lead before the water break with points from Joe Egan and a long range major from Darragh Stakelum giving them a 0-5 to 0-3 lead at the break.

The CBS got the first score of the resumption with Jack Leamy linking up very well with Stakelum again, who sailed over a beaut' from distance on the run, but Templemore were proving economical with their chances as Jamie Ormonde got his and his side's first from play in the 18th minute.

The opening goal of the game came just a minute later though, as Joe Maher was given the simple task of finishing low from close range after Stakelum cut through the Templemore defence to set up the Moycarkey Borris player.

This score was the main difference thus far but the game resumed into its pattern of hard play and physical exchanges, but you got the feeling that Thurles had another gear to go into, and they went up a level before half-time with further scores from Stakelum, Egan, Ciaran McCormack, and Jimmie Lahart extended their lead; all clustered around three Paddy McCormack frees which seen Thurles lead 1-10 to 0-8 at the interval.

Our Lady's would have been pleased to still be within touching distance at this point, as Thurles had register nine first half wides, but they were soon facing a daunting task to pull off the win after the restart, as Thurles hit them for a quickfire 1-1 in the opening minutes, with the goal coming from Joe Maher once again after being picked out with a zipping stick pass from Jack Leamy; the point coming in the form of a Ciaran McCormack free.

That opened an eight point lead which was eaten into slightly by another Paddy McCormack free, but Templemore were starting to lose the intensity and bite in defence and this was leading to space for the Thurles forward to exploit.

And exploit they did, as two more points from Leamy and McCormack beefed out the lead, just before the former raised another green flag in the 44th minute to essentially end the game as a contest; Leamy burning his man one-on-one to fire a rasper to the top corner to make it 3-13 to 0-9 in favour of the CBS.

Jamie Ormonde was the only outlet of scores from play for Templemore and in fairness to him, he landing two lovely points in the final quarter to give Templemore something to shout about, but Thurles just went through the motions and even had the luxury of subbing off Ciaran McCormack and Darragh Stakelum who will face each other in the county final replay this Sunday between Loughmore Castleiney and Thurles Sarsfields; with scores in the final 15 minutes from Joe Caesar, Stephen Walsh, and substitute Tommy Maher capping off an easy win for their team.

Thurles look to be real contenders this year, with the likes of Jack Leamy, Ciaran McCormack, Darragh Stakelum, Joe Caesar, and Jimmie Lahart to name just a few, looking really impressive and after their win over champions St Flannan's last week, they will take beating from here.