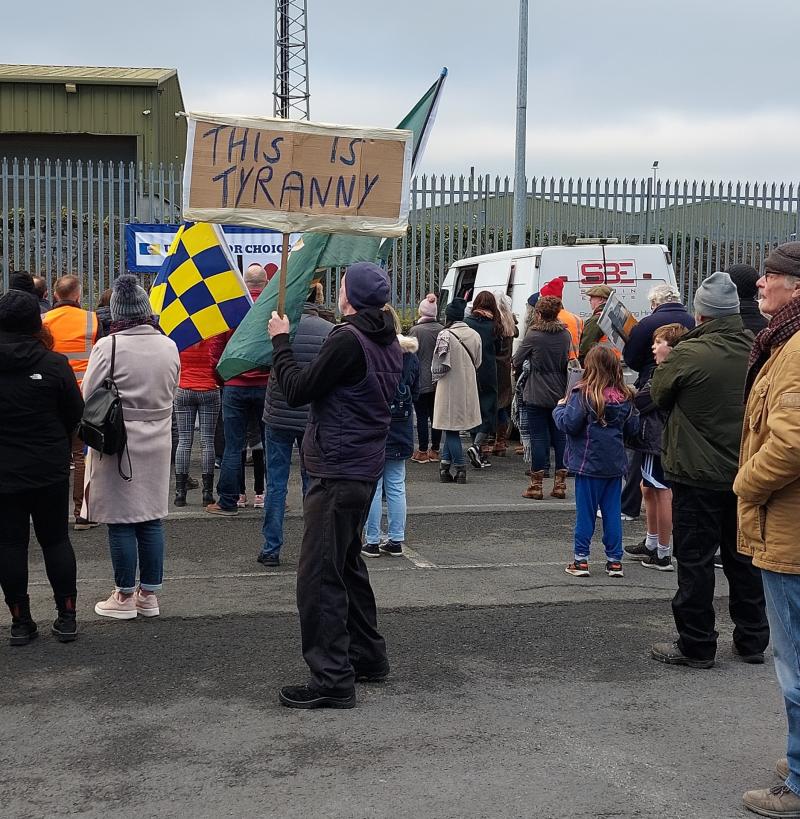 Protesters at the Nenagh Railway Station

Approximately 100 people marched against Covid-19 public health measures in Nenagh last Saturday. The Tipperary Civil Rights Association and the Independent Campaign for Truth and Proper Healthcare held the rally titled March and Rally for Truth and Civil Rights. Protesters marched from Banba Square to the Railway Station, where three speakers addressed the crowd.

The host speaker, referred only to as "Mary", said the rally's purpose was to promote choice, not judgement and that the speakers are "ordinary, decent people with no political affiliation." She said they are fighting for freedoms and our constitution.

"It's really important to bring up our ancestors. They died for our freedom. Things that are written in blood in our constitution," said Mary.

The groups say they are not anti-vaccine but oppose its use on children.

Rachel Whelan representing Enough is Enough on the day, questioned the use of the vaccines on children who she says have "likely" developed "herd immunity."

She says it will have detrimental effects on health and has no benefits other than reducing the impact of the disease.

"A so-called vaccine that was only designed to reduce severity of illness and risk of hospitalisation and has no effect on virus transmission. Why the sudden rush to inject healthy children for an illness that poses a negligible and insignificant threat and which have already most likely developed natural herd immunity over the course of the past 20 months,” said Ms Whelan.
Ms Whelan said Enough is Enough is "a grassroots citizen-led campaign for medical freedom and the proportionate, evidence-based response to Covid measures," said Ms Whelan.

She also claims the vaccine is riskier to children than Covid-19 but did not elaborate on what those risks might be.

"So, what is it the great unwashed dirty, diseased child now outcast from?" asked Ms Whelan.
The protester also opposes vaccine passports, "forced vaccination," which they call discrimination against unvaccinated people and children wearing masks in school.

"The targeted vitriol and dehumanisation of unvaccinated people, which is what we are witnessing all around us, is exactly the same technique that was used against Jewish people in the 1930s Germany," said Ms Whelan.

Ms Whelan called on fully vaccinated people to join their cause.

Kevin Quinn, a cancer survivor, said he had not taken the vaccine because experts have advised him not to.

He said both he and his wife got Covid and her symptoms were much worse than his. He asked who out of the vaccinated and unvaccinated are most impacted by Covid-19.

He said, as a result, he and people like him are called names by the media and that comments have been made in cafes when he takes his coffee to go. He had, he said, been called "a hardcore crank."

He has taken his other vaccines but read medical information and called on people to debate it with him.

Mr Quinn described his shock at finding out that media use dummies in the background instead of actual patients when they interview doctors and nurses in hospitals. He said this is scaring the public.

"On the 16th of December, I think it was I was watching the six-one news, and a student nurse came on, and she was talking about overcrowding in the hospital, and I looked in the background, and I said the people in the beds and sitting in the chairs are not moving.

"So I went back to the player, and I stopped the player and what was sitting in the beds and chairs were all dummies, mannequins. You are scaring the bejesus out of our elderly. They don't want to come out of their houses because of this," said Mr Quinn.

He said the hospitals are empty when he goes for his scans and alleged that lies are being told.

He called on the public to keep asking questions, "spread the knowledge", and take back the country.

All three speakers called on the media present to report their message accurately, fairly, and honestly.

There was a moment of silence for the elderly, who they say were left to die alone without visitors to nursing homes, those who could not access medical care on time because of cancelled appointments, and those they say took their own lives because of the impact lockdowns. They acknowledged the people and children they claim died shortly after receiving the vaccine.

No reference was given to the children who Ms Whelan claimed died due to the vaccine.

Tipperary duo release first CD - It's Never Too Late (not even for Christmas)!