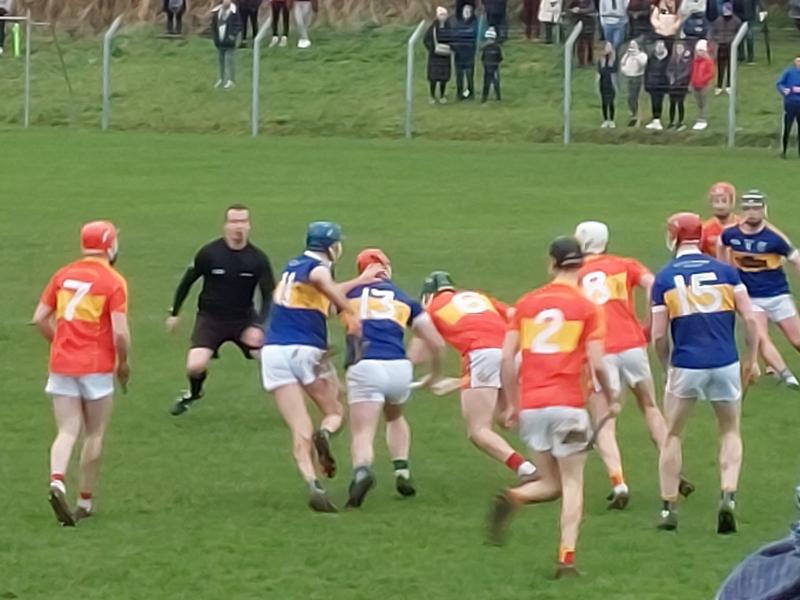 County U21 A Hurling Semi-Final

A dramatic and controversial Kyle Shelly goal in the first minute of second half stoppage time sent mid champions Moycarkey Borris into the U21 A final after edging a physical and sometimes ill-tempered contest in front of a packed house in Toomevara earlier this afternoon.

There will be a lot of question marks from Kiladangan supporters with the late goal, as it seemed that Shelly had pushed Kiladangan goalkeeper Neil Cahalan after a high ball dropped into the danger area, and with the breaking ball scurrying free, Shelly had the presence of mind to sweep the ball home on his knees to win the game.

Despite the controversial nature of the winning score, it can't be argued that Moycarkey didn't deserve the win, as they dominated the second half, reducing Kiladangan to just three points in the second 30, as they spurned numerous free opportunities and probably should have switched free takers sooner, as the two Shelly's dried up from placed balls with Jack Fallon taking over to good effect.

Kiladangan put a lot into the game, and perhaps the turning point from their point of view was the sending off of full forward Paul Seymour with some ten minutes to play, picking up two needless yellow cards; one for getting involved with Rhys Shelly off the ball, and the second for a cynical challenge on Rory Darmody under the dugout.

The first half was littered with stoppages as the teams weren't getting to grips with the tackle, perhaps over-hyped at the start of the match, as Sean Lonergan in the middle was blowing the whistle relentlessly in the opening quarter.

Shane Gleeson whipped over the first score within 60 seconds, to which Moycarkey responded in kind with a long range free from Rhys Shelly after three minutes, as both sides felt their way into the contest.

Jack Fallon was looking very lively in this time and launched a lovely score from midfield to give his side a 6th minute lead, but the rest of the quarter was marred with a litany of frees being awarded, as the game more or less began as a free taking contest between Shane Gleeson and Kyle Shelly, the latter notching three frees along with a nice effort from play to give Moycarkey a 0-6 to 0-2 lead at the first half water break.

Kiladangan landed a long range free from Gleeson in the 19th minute, but Moycarkey were doing a lot of the hurling, with Jack Fallon pulling a lot of strings at midfield, along with Darren Flood who was very influential playing as the sweeper for Moycarkey.

Fallon pointed another lovely effort from play on 20 minutes before Kiladangan hit a mini purple patch with Shane Gleeson and Sean Hayes pointing two in a row in as many minutes, before a large chunk of luck fell into Kiladangan's lap; Paul Seymour's pointed effort cannoning off the post to land perfectly in front of Sean Hayes who whipped the ball to the back of the net to give his side the lead in the 24th minute.

A fabulous Jack Morrissey sideline soon after was the perfect response for the mid champions to level, as Shane Gleeson and Joe Maher traded scores before a disputed penalty was awarded to Kiladangan.

After a long ball into the Moycarkey goalmouth, Rhys Shelly was adjudged to have deliberately laid on the ball, and after deliberation with the umpires, Lonergan awarded a penalty which Shane Gleeson dispatched clinically to give Kiladangan a 2-6 to 0-10 half-time advantage.

The second half got off to a blistering pace with Stephen Walsh winning the ball from the throw-in and hurtling down the heart of the Kiladangan defence before laying it off to Jack Morrissey, who side-stepped a man before teeing up Brendan Looby in front of goal, but he fresh aired a first time double with the goal at his mercy.

Thereafter, the game went back into its shell, with very little in the way of free flowing and meaningful passages of play taking place as the whistle continued to become a familiar sound; Bryan McLoughney and Shane Gleeson (free) pointing in this quarter for the north champions, while Kyle Shelly (2) continued to cause problems, pointing his sides total before the second half water break.

The final quarter belonged to Moycarkey, as their back division were well on top with Rory Darmody and Kyle Ryan in particular coming out with a mountain of possessions, as Kiladangan's discipline was deserting them and coughing up shots at goal to their opponents.

But some poor free taking from the Shelly's was letting Kiladangan off the hook, and it was up to Jack Fallon once again to lead the way for his side, reducing the gap to a single point on 47 minutes, just before Paul Seymour received his marching orders a few minutes later; Moycarkey now in the ascendency.

Some ten minutes passed before Fallon stepped up with a free to level the game finally, but Kiladangan soon regained the lead with a major from distance from Sean Hayes; a lead which lasted all of 20 seconds as Max Hackett earned a free for Fallon to level once again heading into injury time at 0-15 to 2-9.

The match winning moment came a minute later, as a long range effort from a Moycarkey player held up just shy of the square, with the ball sticking in front of Neil Cahalan which allowed Kyle Shelly time to smother the Kiladangan goalie and slide the breaking ball to the empty Kiladangan net and clinch a much deserved win for the mid men.