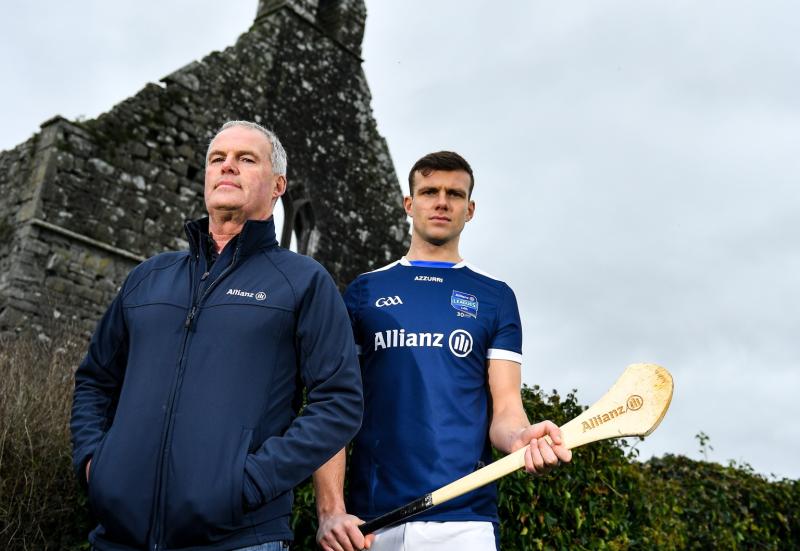 Brian and Ken Hogan at the launch of the Allianz National Hurling League.

Lorrha and Tipperary netminder Brian Hogan is expecting another tough dual for a starting spot for the Premier this year, after the 2019 All-Star lost his place to namesake Barry Hogan last year.

The Kiladangan Hogan started three out of five league games last year, along with starting all three of Tipperary's championship games against Clare, Limerick, and Waterford, but there was no bitterness between the two afterward.

"When I got dropped last year, obviously I was disappointed but at the same time I was delighted for Barry because we’d be great friends and we’re always trying to improve each other’s game,” Brian said.

“We’d be constantly talking at training, looking to see what can we do differently with our puckouts, could we change our positions in the goals?’ We have a fantastic relationship and long may it continue and long may we battle for the number one position.”

While Barry Hogan was solid in his first year between the sticks, Hogan revealed that he suffered from a bout of vertigo last year, after suffering a nasty concussion in the lead up to the league game against Galway last year.

“I suffer from vertigo anyway, from my allergies and stuff, and when hay fever kicks in I would get vertigo,” said Brian, speaking at the launch of the 2022 Allianz League alongside his father, Tipp great Ken. “The doctor would have explained to me that because of the concussion, it can trigger your vertigo symptoms. That’s really what brought it on."

“I think it was before the Clare game in the Championship,” he said. “I was suffering from the vertigo and I remember in the training on Friday night I wasn’t going well in training and I knew something was wrong.

“Tommy Dunne was hitting shots at me and I said, ‘Tommy, there is something not right here’ and I went to Brendan (Murphy, doctor) straight away.

“He knew right away that it was vertigo that was affecting me because it was the height of summer when the pollen count was very high.

“We did a good hour session before the match on Sunday, just to make sure I was right, and I was sharp and fine and ready to go," he added.

Along with the rest of the county, Hogan was shocked and surprised by the news of Padraic Maher's premature exit from hurling, and was eager to laud the Thurles Sarsfields and Tipperary legend.

“He had great communication skills, he had a bit of everything, he was unbelievable to have alongside you on the pitch, a great leader in his actions and in the way he spoke,” said Hogan.

He continued: "He was an absolute warrior and hero because the presence he had made in that backline for the last 13 years has been unbelievable. He has been playing there since 2009 so he is obviously going to be a massive loss and he's been brilliant for us.

"Sometimes there would be a forward coming in on top of you and you would be expecting to make a save, next thing Paudie comes across and makes the save, stopping the ball with his body. It was great to have him there beside you," he finished.

Lights on Thurles street to be upgraded in the coming weeks

Friar Street is set for an overhaul