All-Ireland semi-final against Galway goes ahead on Sunday 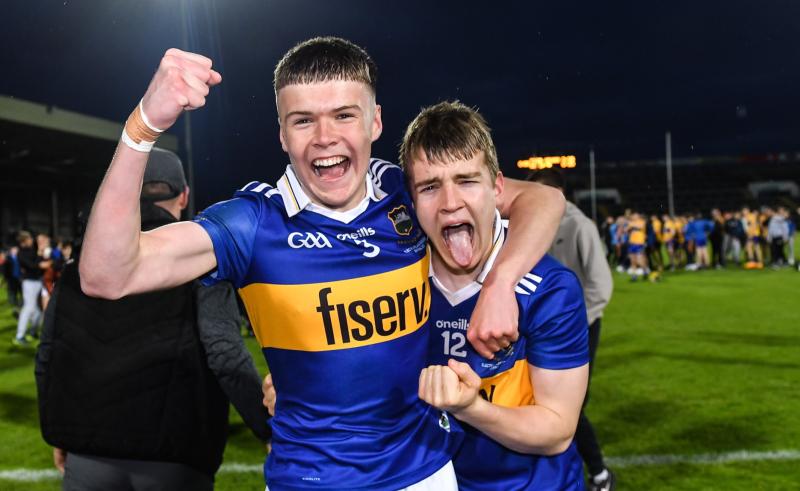 Almost six weeks after their victory over Clare in that epic Munster final, Tipperary’s minor hurlers will embark upon the next stage of their championship journey at 2pm this Sunday when they face Galway in the Electric Ireland All-Ireland semi-final at the TUS Gaelic Grounds in Limerick.
The prize for the winners is a place in the All-Ireland final on Saturday July 2 against Offaly or Clare, who meet in the other semi-final at FBD Semple Stadium at 7.30 on this Friday evening.
On Sunday, the Tipp boys will return to the scene of that famous triumph in the provincial decider on May 11, when they needed extra-time and then penalties to defeat Clare.
Eoin Horgan (Knockavilla Donaskeigh Kickhams), Paddy McCormack (Borris-Ileigh) and Adam Daly (Knockavilla Donaskeigh Kickhams) held their nerve to convert their penalties in a 3-0 win, with Horgan saving two of the Clare efforts as Tipp advanced.

A double header is on the cards

Now, as they prepare for another big game, manager James Woodlock is particularly pleased with the huge sense of belief and work ethic in the panel.
“We always produce good hurlers in Tipperary, it’s just a matter of backing it up with spirit and workrate,” he says.
“They have met any challenge that has been put to them and are a really good bunch of players.”
Even when they stared a championship exit in the face against Clare, the manager kept faith in his team, despite falling four points behind and losing Nenagh Eire Óg wing back Sam O’Farrell to a second yellow card in the second half of normal time.
“It might be easy to say it now but it never crossed my mind that we would lose the game,” he says.
“The first day against Waterford in Dungarvan we were six points down and came back. The scoreboard only matters at the end of the game.
“I never felt it was gone from us. We never panicked on the sideline and neither did the players.”
He agreed that the players showed great character against Clare, something that he says is instilled in them.
“They were tested every way, mentally and physically, by Clare. The boys stood up and were really counted.”
He also said he couldn’t have asked for any more from the bench, with substitutes contributing 1-5 to keep their challenge alive.
Mullinahone’s Sam Rowan scored a goal and Toomevara’s Darragh McCarthy weighed in with three points, while Cathal English (Fr Sheehy’s) and Jamie Ormond (JK Brackens) had a point apiece before the shootout.
“We actually had a total of 3-9 scored by players coming off the bench during our four games,” says Woodlock.
“The hardest job is to pick a panel and then pick a team. We’ve a lot of players, everyone wants to play and it’s the substitutes’ job to come on and finish the game.”
He said it hadn’t been difficult to manage the lay-off of almost six weeks since the Munster final.
“We’ve nine months of work put in, the boys are in good form.”
After beating Clare, the players were given a week off to recover. On their return they had “one or two tough training weeks” and challenges against the county’s second string minor panel that recently won the Celtic challenge, beating Galway by 3-17 to 0-8 in the final to claim the Michael Hogan Cup, as well as against the Thurles Sarsfields Under 19 team.
James Woodlock says there has been “a brilliant relationship” between both minor hurling panels, with between 50-55 players involved.
“The minor grade is about developing the squad and we think the players are developing really well.”
Now they are fine tuning their preparations before facing a Galway team that the manager describes as “a serious outfit.”
“We’ve seen them once or twice. They have plenty of pace and really good hurlers and are a formidable outfit.
“The vibe around Galway is that they have a really good team that’s capable of winning the All-Ireland, but we feel the same in Tipperary.”

On the injury front, Tipp have “a couple of niggles” that the manager hopes will be “tidied up” by the weekend.
The referee on Sunday is Carlow’s Patrick Murphy and if necessary extra-time will be played.