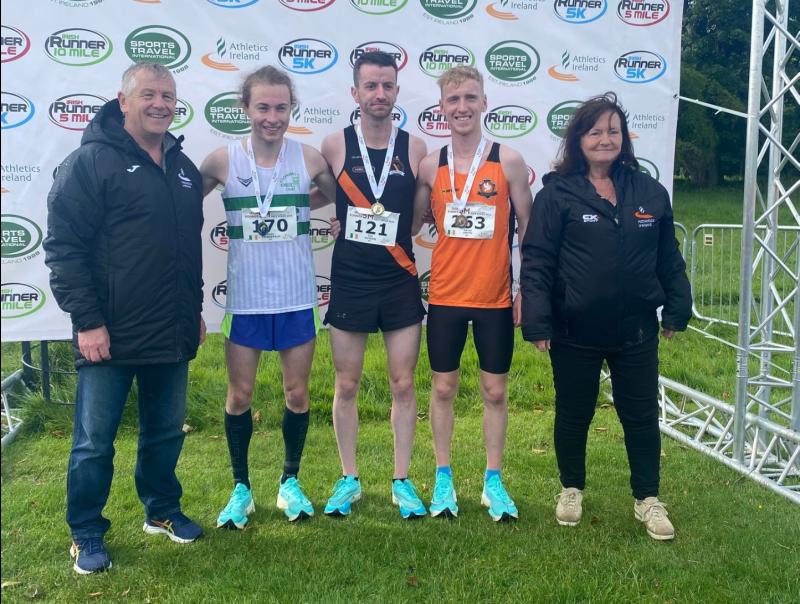 The Phoenix Park was the venue last Sunday for the National 5 Mile Road Championships, with a 9am start. It was great to see three club members competing at this level.
Evan Fitzgerald was to the fore from the start and soon a group of three opened a lead on the chasing pack that included Evan.

At around two miles the winner, Ian Guiden of Clonliffe Harriers, made his winning move, with Evan in third place at this stage. Evan kept a strong pace going over the closing stages to take silver in 24 mins 24 secs in a new PB for this distance.

Conor Fleming also ran very well when finishing seventh over 50 in what was a very competitive age category and a very good time of 29 mins 25 secs.

Then we had Dick O’Gorman running well when finishing 141st in 32 mins 47 secs, a very good improvement on his Clerihan 5-mile time of 33 mins 47 secs - great running all round.

Super performances at the Mary Doyle Memorial 5k race
The third promotion of the Mary Doyle Memorial 5k took place in glorious sunshine in New Inn last Saturday night and it was wondeful to see present and former club members taking part in this event, as Mary was held in high esteem by everyone for her trojan work in the club over the years.
Mary was heavily involved in the juvenile side of the club, and it was fitting that one of our juvenile athletes, Daragh Boland, was our first athlete across the line. Daragh ran a well-judged race when finishing third in a very good time of 18 mins 46 secs.
Angela McCann once again produced a great performance when winning the women’s race in 19 mins 4 secs when finishing sixth overall, which was a good improvement on her 2019 run of 19:30. On Saturday night last she was pushed all the way by another of our juvenile athletes, Muireann Duffy, who was second woman in 19 mins 6 secs.