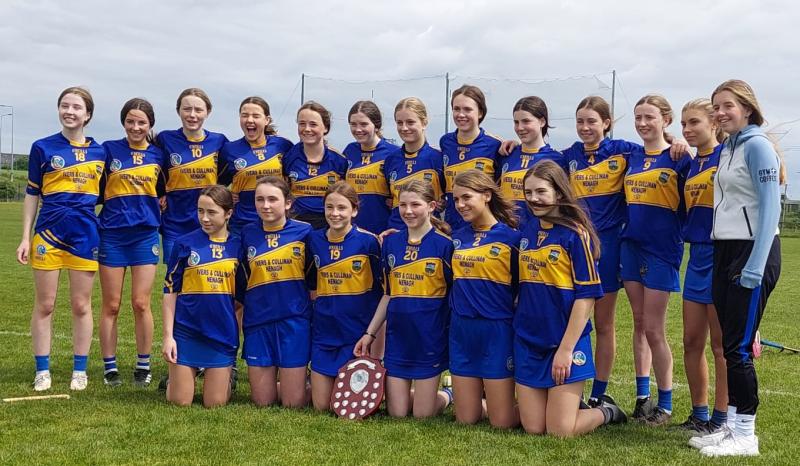 Tipperary A  - Munster A Champions

After several years without this competition being run due to Covid restrictions, Tipperary captured the Munster A title in WIT Arena hosted by Waterford Co. Camogie Board.

In the opening group game Tipp A started very slowly with Cork leading by 1-4 to 0-2 at half-time with Ella Frend and Sinead Lonergan excellent in our full back line. A good recovery by Tipperary secured a draw with the final score being an 80m free by Abbie Horgan.

Tipperary needed a result against Limerick then and played brilliantly to win by 2-6 to 0-3 with super defending and also Ola Wasilik sharp in goals. Abbie Horgan and Clodagh Shinners raised green flags for Tipperary v Limerick while Emma Kennedy blotted out Limerick main scoring threat. Waterford made a game of Round 3 with two goals in quick succession at the start of the second half  but goals from Kate Nevin, Clodagh Shinners, Doireann Ryan kept our lead.

A 5-7 to 3-2 win over Waterford in the final group game put Tipp into the final against Limerick as Limerick beat Cork in their deciding group game.

In the Munster A final, Tipperary had a two points lead at half-time with two of our scores coming after defence splitting solo runs; a goal by Ailbhe Treacy and and lovely point by Emma Bonnar.

In the second half, midfield dominance by Abi Kelly, Tori Doyle and Emily McGrath helped Tipperary against the wind. After the game President of the Camogie Association Hilda Breslin presented Tipperary Captain and excellent centre back Ciara Cahill (Drom-Inch) with the winning shield.

Tipperary B  - Munster B Champions

Tipperary lost to Cork in Round 1 but had great wins over Limerick and Waterford to reach the Munster B final. Roisin Ferncombe’s massive puck-outs gave Tipperary an advantage on several occasions. Tipp had a 1 point lead at half time. Aoife Quirke and Eibhlin Bourke were effective for Tipperary in attack with Brid Delaney and Alice Purcell defending well in the final.

After a long day both teams were tiring and Cork couldn’t manage a score meaning Tipperary ran out one point winners to once again the delight of the Tipperary following, which featured a superb defensive display.

A whole team performance in the last three games was key to Tipperary securing this Munster title.

Played in WIT Arena, Carriganore, Tipperary recovered after a Round 1 loss to Cork with Round 2 and 3 wins against Waterford and Kerry. Tipperary recorded a big win over Waterford 5-4 to 0-1 and also beat Kerry 0-4 to 0-1.

This put Tipperary back into the Munster C final v Cork. In the final Cork led at the break 0-2 to 0-1. Tipp had the wind advantage in the second half and cut the Cork lead to a point but unfortunately couldn’t produce another score to leave a narrow one point win for Cork.