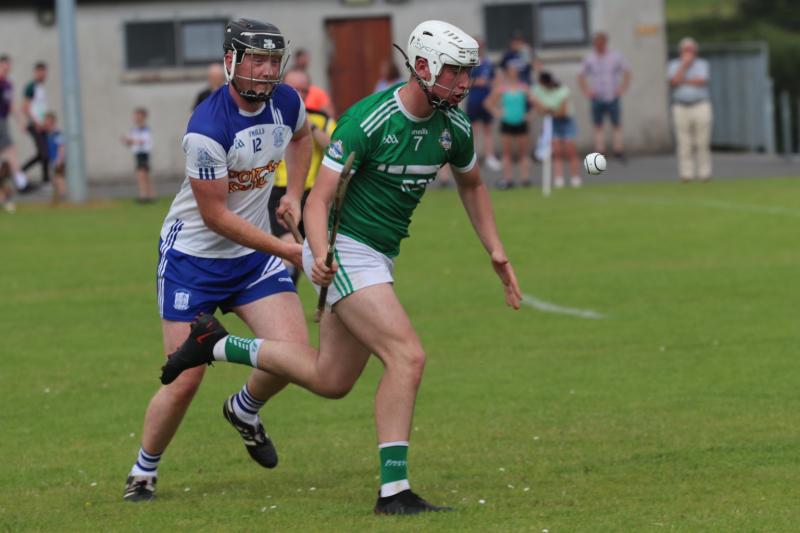 Golden/Kilfeacle, the 2019 champions, are through to their third Tipperary Credit Union West Intermediate Hurling Championship final in four years, following their late late smash and grab over Cappawhite at a sun- drenched Annacarty on Saturday afternoon.
Golden lined out without the services of the injured Andy Byrnes and the unavailable Jack Leamy and after an even enough first half, Cappawhite led at the break by 1.11 to 0.9, as a result of hitting 1.2 in the closing minutes before the break.
The second period was also evenly balanced with Ben Currivan keeping the Golden men within touching distance where he was unerring from placed balls. However, Cappa had gone into a six-point lead, 1.18 to 0.15 with ten minutes remaining and appeared to be on their way to victory.
Four unanswered points from Ben Currivan (3) and one from Eoghan Ryan in a three-minute spell had Golden right back in the mix.
Cappawhite, through a Kevin Stapleton point eased back to a three-point advantage with two minutes of normal time remaining but when Ben Currivan’s close in free was stopped on the line, Davy Wade was on hand to steer home the equaliser. Eoin Marnane put Golden ahead for the first time in the game, as the clock headed towards injury time, but Willie Barry’s sixth point tied the game, as extra-time loomed.
Two minutes into injury time, Ben Currivan slotted over his 16th point of the game before a late Tom Byrnes goal gave them a four-point advantage as Donie Horan called time, in what was an excellent game, enjoyed by a good crowd.
Cappawhite, the holders, were quickly out of the blocks, as Gearoid Lennon opened the scoring at the road end, when he put over within 50 seconds. Two minutes later Ben Currivan converted from a placed ball to tie the game. The Cappawhite full forward line were moving well and causing problems to the Golden rear-guard and scores came from Dara McCarthy and Gearoid Lennon, either side of a Seanie O’Halloran point for Golden. McCarthy got his second point on six minutes to go two up. Ben Currivan pulled one back before Cappa hit three on the trot from Willie Barry (2) and Ryan Renehan.

Cappawhite were finding scores easier to come-by and with Gearoid Lennon and Brendan Murphy finding the target, they eased into a three-point lead by the quarter hour mark. Ben Currivan, from placed balls, kept Golden in contention as the sides drew level at 0-9 each with five minutes of the half remaining. Cappawhite finished the stronger and a Dara McCarthy goal in injury time following points from Brendan Murphy and David Buckley, had them five to the good at the break, 1.11 to 0.9.
After the break, points were exchanged by Currivan and Willie Barry as Cappa maintained their four-point advantage. Golden were always trying to play catch-up, but were unable to make inroads. Two points in quick succession from Ryan Renehan gave the holders a commanding six-point lead with ten minutes remaining.
Ben Currivan converted three frees in succession and when Eoghan Ryan put over from the half way line, the lead was down to two. Kevin Stapleton then put three between the sides, but Golden were coming more into the game.
With two minutes of normal time remaining, Golden were awarded a close-in free, their first of the game. Ben Currivan went low and hard, in search of the equaliser. His shot was well saved on the goal line, but Davy Wade was on hand to crash to the net for the equaliser with 90 seconds remaining. Eoin Marnane came up-field and put over to give Golden the lead for the first time, as the clock ran down. Willie Barry equalised at the other end, as extra time loomed. However Golden, and in particular Ben Currivan, were not yet finished. Currivan put over from 40m, two minutes into injury time and when his free from well over 100m dropped into the goalmouth, Tom Byrnes, who had just introduced, fielded a high ball and crashed to the net four minutes into injury time.
While Davy Wade and Tom Byrnes were the goal scorers late on, Ben Currivan was the real hero for Golden, scoring 0.16, his second half points, in particular, keeping them in the game.