Welcome windfall of €5,000 for Tipperary soccer club to develop facilities 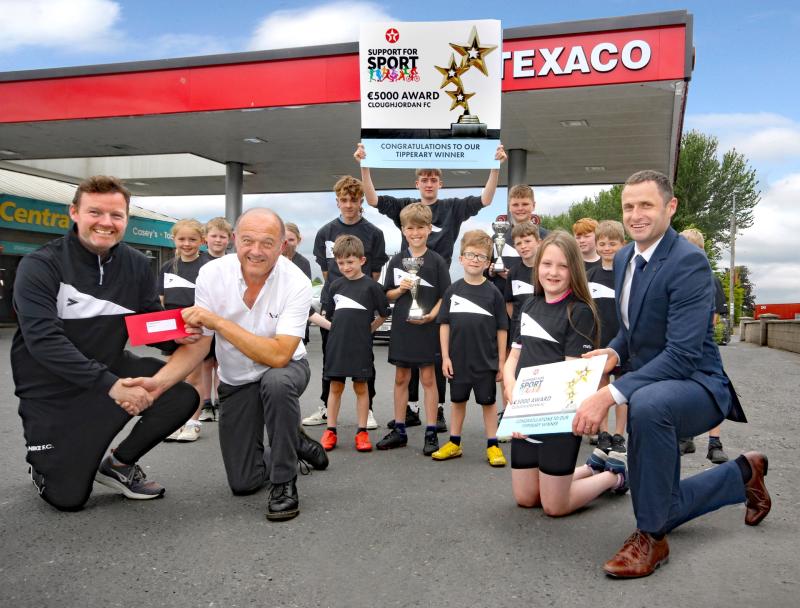 Cloughjordan Football Club, county winners in the recent Texaco Support for Sport initiative, has been presented with a cheque for €5,000 which will be used to develop its facilities.

This will include the installation of two portacabins and a storage area when the club moves to new four-acre playing pitches in Cloughjordan village – a move described by the club as "a huge step forward."

Competing in the North Tipperary Soccer League, Cloughjordan FC is proud of the contribution it is making to community life within its area.

In addition to its regular training and competitive programme of matches for boys and girls in the 4 to 15 years age groups, the club has taken major strides within the past year towards expanding its young female membership by introducing four new age groups for girls.

Under the scheme – similar to that which proved successful last year when the Tipperary county award was presented to Cullen Lattin AFC – the presentation was made to the club by Valero Energy (Ireland) Limited, the company that markets fuel in Ireland under the Texaco brand.

Now in its second year, the Texaco Support for Sport initiative sees an annual fund of €130,000  set aside for allocation in equal amounts of €5,000 to successful applicants chosen on a county-by-county basis.

Entries for the Texaco Support for Sport 2023 initiative will open this autumn.