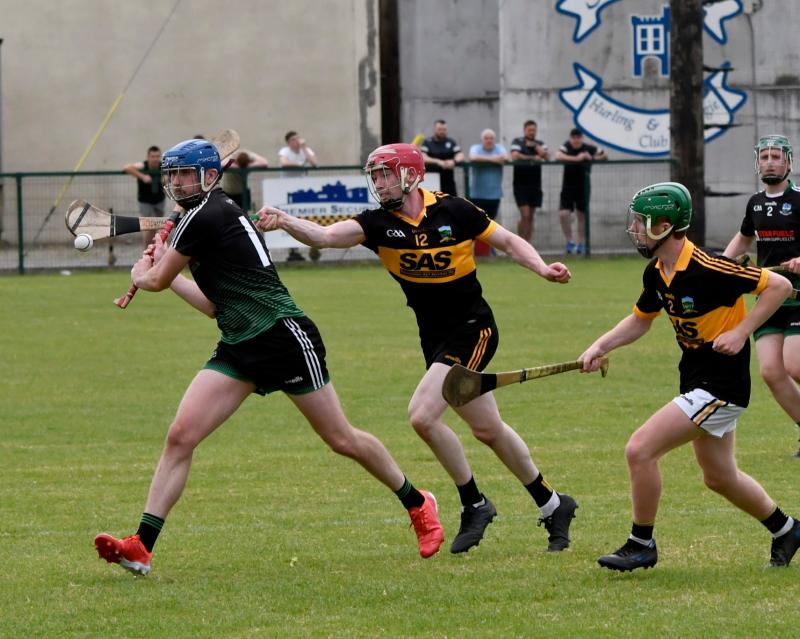 Clerihan forward Andrew Hill gets his shot away despite the efforts of Mark Lynch (St Patrick’s) during Saturday’s south Tipperary Junior B Hurling Championship semi-final at Clonmel. all pics michae

The first of the South Tipperary junior B hurling championship semi-finals was a very close contest until the 42nd minute, when Clerihan were reduced to 14 players following a red card for Billy Norris.
The teams were level at the time, 1-9 each, but St Patrick’s dominated the remainder of the game, scoring 1-9 to Clerihan’s 0-2 to run out easy winners.
The St Patrick’s half forward line scored 2-13 and some scores were a joy to see at this level. Their subs also had a big influence on their second half performance as they secured an easy victory.
In the first half referee Keith Delahunty had to stop play after 15 minutes to receive treatment for an injury but after a four-minute delay he managed to continue to the end.
The game opened with Clerihan racing into an early two-point lead with scores from Conor Horan and a point from a free by Gavin Sheehan. St Pat’s got on the scoreboard with a point from Jamie Brett, set up by Aaron Cronin.
In the seventh minute Clerihan restored their two-point lead when Gavin Sheehan scored a point from a free from 70 metres. Within the next two minutes St Pat’s were level with points from Jamie Brett and their first from a free by Mark Lynch.
By the 16th minute St Pat’s were ahead with another point from a free by Mark Lynch. Clerihan had a point from play from Sean Carey and the sides were level for the second time following an exchange of points in the 22nd minute, both from play, from St Patrick’s Cathal Foley and Clerihan’s Gavin Sheehan to level the scores again at 0-5 each.
In the 27th minute Patrick Moroney made a great save from Sean Murphy and within a minute Mark Lynch, St Patrick’s, shot past Kevin Murray in the Clerihan goal for a great score. This was followed within a minute with a point from play by Cathal Foley as St Patrick’s raced into a four-point lead.
They stretched their advantage to eight points with two frees from Mark Lynch, leaving the half-time score St Patrick’s 1-8 Clerihan 0-5.

After the interval Clerihan came out with all guns blazing and within the first 10 minutes scored 1-4 to 0-1 from St Patrick’s. The goal from JP McGrath was set up by Sean Carey and three of the four points came from Gavin Sheehan frees and the fourth from the stick of Sean Carey.
St Patrick’s sole reply in this period came from Cathal Foley, leaving the sides level for the fourth time. However, the sending off changed the game in favour of St Patrick’s, with their subs Aidan Buckley (0-1), Matt McCormack, Jack Cleere and Cameron Moynihan all making a favourable impression.
Their haul of 1-9 in the last 18 minutes of normal time, when they had that numerical advantage, was scored by Cathal Foley 0-3, Mark Lynch 0-3, Shane Gorey 1-2 from frees and Cameron Moynihan 0-1, while Clerihan responded with two points from frees from Gavin Sheehan.
St Patrick’s best players included Mikey O’Brien, Tommy O’Brien, Colm Dunne, Cathal Foley, Shane Gorey, Mark Lynch, Aidan Buckley, Matt McCormack and Cameron Moynihan.
Those that caught the eye for a gallant Clerihan were Kevin Murray, Billy Norris, Gavin Sheehan and Sean Carey.