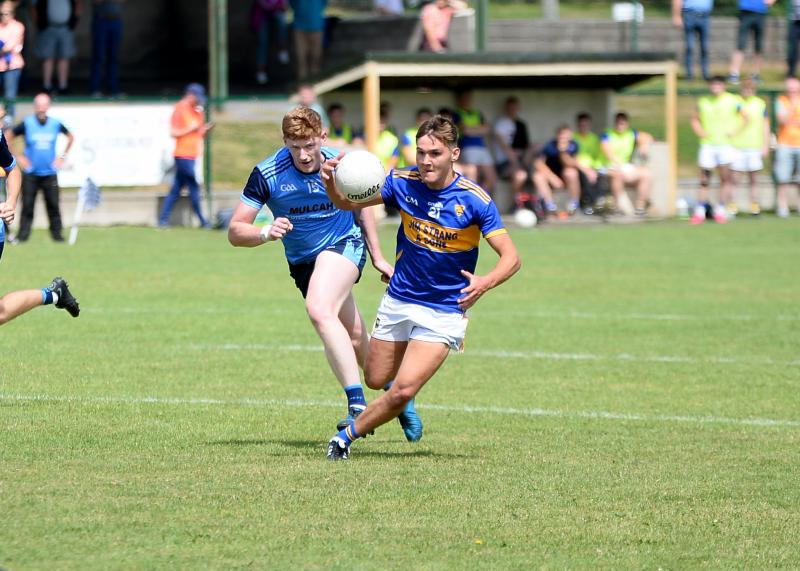 Moyle Rovers possessed too much firepower for Kilsheelan Kilcash in the opening round of the county senior football championship at Clonmel on Sunday.
Rovers secured two vital points in group two with a sparkling second half display.
The sides were tied 0-7 to 1-4 at the break, the Kilsheelan goal a great score from Billy Murphy.
However Rovers took control in the second half, outscoring Kilsheelan 2-7 to 0-4.
Kilsheelan were without key players Bill Maher and Mark Kehoe from the start and suffered another blow in the first minute with a leg injury to Conor Davin-Murphy that saw him limp off after virtually the first play.
And while Kilsheelan were competitive throughout, they lacked the scoring threat that Liam Boland, Shane Foley, Stephen Quirke and Diarmuid Foley provided to the Powerstown Lisronagh side.
Rovers drove at the heart of the Kilsheelan defence throughout the second period, their two goals from brothers Diarmuid and Shane Foley reflecting their exciting power play.
An understrength Kilsheelan never gave up the fight but just one point from play in the second thirty minutes was indicative of their problems in attack.
Moyle Rovers will fancy their chances of winning the group, which also includes Rockwell Rovers and Drom-Inch, and two points in their opening encounter against tricky opposition sets them up nicely.
Yet they didn’t have it all their own way in the first half. The unfortunate injury to Davin-Murphy in the first minute held up play for at least three minutes and when referee Derek O’Mahoney resumed the action, it was Kilsheelan who took the lead through a nice Jamie Roche score.

Clonmel team get into their stride after poor first half

Rovers hit back to lead through Rory Collins and Shane Foley – Foley punching over when a goal looked on - but Kilsheelan regained the lead midway through the half when great work from Barry Kehoe to win possession under pressure set up Billy Murphy for a low shot that gave Ciaran Kenrick in the Rovers goal no chance, to leave it 1-1 to 0-2.
Rovers were back in front with two from Liam Boland, a 45 and a free, and a nice point from the hugely influential Stephen Quirke, who ended the game with four from play.
The lead might have been greater but for a string of super saves from Kilsheelan goalkeeper Evan Comerford. The former county man kept his side in the game with crucial blocks from Rory Collins, Luke Delahunty and Shane Foley.
Paul Maher levelled again and it was still all square at the break, with Boland and Cathal McKeown for Rovers and two from Jamie Roche for Kilsheelan exchanging scores.
Moyle Rovers enjoyed a dream start to the second half. Stephen Quirke pointed after just sixteen seconds, and then they cut open the Kilsheelan defence, with Shane Foley bursting through the centre and feeding brother Diarmuid for a cracking goal that Comerford could do nothing about this time.
Kilsheelan responded with points from Barry Kehoe and Jamie Roche frees but Rovers began to turn the screw and put daylight between the sides.
In the space of six minutes they outscored Kilsheelan five points to one, through two from Boland, one a free; two from Quirke in the space of sixty seconds, and one from Shane Foley, to a Kilsheelan reply from Billy Murphy, a lovely score and their only one from play in the half, which put Rovers 1-13 to 1-7 up with ten minutes to go.
A Jamie Roche free reduced the margin to five but Moyle Rovers finished in style to confirm their superiority, Shane Foley running onto a breaking ball to fire a great goal past Comerford and Liam Boland copper-fastening a superb captain’s display with the final point of the game.
Moyle Rovers: Ciaran Kenrick, Cathal McKeown 0-1; Morgan Irwin, Aidan Foley, Rory Collins 0-1; Jack Harney, Luke Boland, Ben Owens, Stephen Quirke 0-4; Dara Ryan, Brian McKeown, Luke Delahunty, Diarmuid Foley 1-0; Shane Foley 1-2; Liam Boland 0-6, 2 frees, 1 45.
Subs: Luke Fogarty for Irwin, Craig Condon for Delahunty, Danny Owens for Diarmuid Foley.
Kilsheelan Kilcash: Evan Comerford, Sean Ryan, Jason Madigan, Emmet Butler, Martin Gibbs, Sean Martin, Cathal Kelly, Billy O’Connor, Jamie Roche 0-5, 3 frees; Miceal Freaney, Paul Maher 0-1; Barry Kehoe 0-1 free, Billy Murphy 1-1; Conor Neville, Conor Davin-Murphy.
Subs: Kevin Guiry for Davin-Murphy, Sean Freaney for Miceal Freaney, Ben O’Connell for Neville, Zac O’Loughlin for Sean Martin.
Referee: Derek O’Mahoney (Ardfinnan).