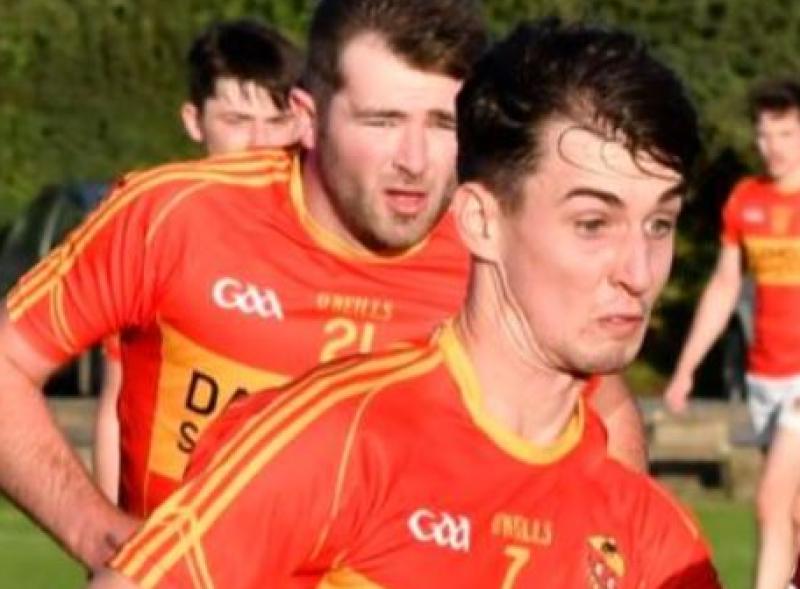 Just one week after a big defeat in the hurling championship, Moycarkey Borris picked up the pieces and secured a surprise win over Aherlow Gaels at a wet Boherlahan pitch last Saturday evening.

In a game that was in the balance for much of the game it was a 59th minute goal by substitute Denis Carey that made the win safe. It was a deserved win for the Mid side who held their lofty opponents scoreless over the last quarter with the winners affording the luxury of kicking ten wides while Aherlow kicked just four.

Heavy rain accompanied the start of the game and both sides were slow to get off the mark with the play ebbing too and froing until the seventh minute when Michael Foley raced on to a ball that seemed lost, but his first timed effort from almost the end line beat Jack Whelton in goal.

Three minutes later Aherlow Gaels got their account open when the evergreen Barry Grogan pointed a forty five metre free from off the ground.

From there, Aherlow, who were without county player Mark Russell appeared to have found their rhythm as full forward Michel EIligot pointed but a foul on Niall Heffernan allowed Kyle Shelly to convert a close in free in the 13th minute.

However, Aherlow’s bright spell petered out somewhat as Moycarkey were beginning to enjoy the greater share of possession but wasted chance after chance with their wide tally increasing to six before eleven minutes of no scoring ended when Michael Elligot first timed to the net from close in after the Moycarkey goal came under sustained pressure.

Quick as a flash, Moycarkey were level through Jack Fallon and approaching the half hour mark the mid side increased their lead with two identical points from the boot of Kieran Cummins and Pat Molloy which made the half time scoreline read Moycarkey 1-4 Aherlow Gaels 1-2.

The rain disappeared momentarily at half time but returned again as both sides battled for supremacy in the early minutes of the new half and Barry Grogan narrowed the gap with a free in the 33rd minute but Darren Flood moved Moycarkey two in front a minute later.

The game reached the 42nd minute before the game came to life when Kieran Cummins cut a gap through the Aherlow cover.
He offloaded to Jack Fallon whose shot for goal was well saved by Joe Whelton at the expense of a forty five which was cancelled out for a free in instead and Kyle Shelly converted. Two minutes later Shelly increased his side’s lead to four which stretched to five when the Moycarkey placekicker added a free in the 43rd minute.

However, there was some fight in the Aherlow team and two quick points by Diarmuid Looby and Stephen Moloney had the margin cut to three. Kyle Shelly missed the ideal chance to increase Moycarkey lead to four but the momentum was with the red and gold with Chris McCullagh making amends with a well taken score in the 56th minute.

Moycarkey supporters wondered if the lead was safe. Barry Grogan’s free against the breeze was short and the Moycarkey defence held firm and in a move that swung from defence to attack, Lewis Carney’s first touch yielded a great goal to seal the points.