Brackens fall over the line against Arravale Rovers 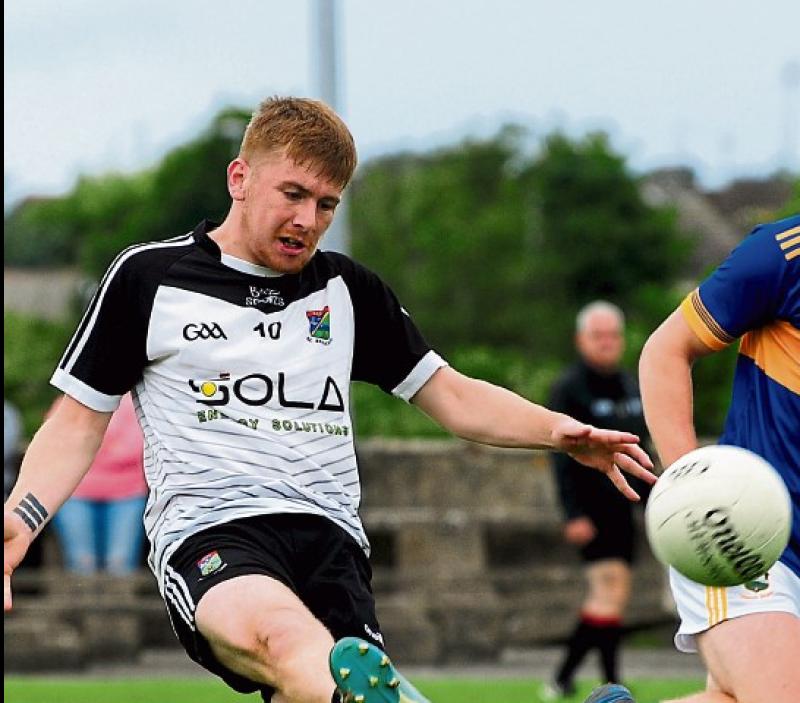 JK Brackens got off the mark in group four of the FBD Insurance county senior football championship following a hard-fought victory over Arravale Rovers in Dundrum last Saturday evening.

Constant rain before and throughout the game ensured surface conditions were greasy and slippery but both sets of players adapted well.

The closeness of the final score was a far cry from the opening half when JK Brackens dictated terms, controlled possession and were willing to recycle the ball rather than lose possession until a shot was on. However just four points separated the teams at the break.

Both sides played with large numbers behind the ball, and attacking on the break. Johnny Ryan was detailed to mark Brackens’ Jack Kennedy, with those two at times the only two players that far up the field.

Kennedy punished indiscipline in the Arravale defence from placed balls. Mikey O’Dwyer and Cormac Maher were often the sole Arravale forwards being marked by Martin Delaney and Tom Murphy at the other end.

The second half saw a different Arravale team emerge. They now dictated terms and controlled the play to eventually draw level at 0-7 apiece for just the second time in the game with twelve minutes on the clock.

James Hogan was the scorer in chief with 0-5. Arravale, though, could never pull ahead and the introduction of fresher legs gave JK Brackens that bit more going down the home straight to pull clear. They were clever in their game management in the last few minutes, limiting Arravale space to get shots on target and then working the ball out from turnovers.

Arravale had chances in this period but failed to take them. JK Brackens gradually started to play the game on their terms, attacking on the break and willing to play the ball around rather than risk the turnover of possession. Paddy Cadell was in control at centre back while their wing backs Jordan Moloney and Neil Quinlan were willing to go forward as support runners.
Midfielders David O’Shea and Lorcan Roche were also getting on a lot of ball. This patient game paid off, as Jack Kennedy pointed a further two frees.

Arravale were finding it harder to work possession down the field but Shane Leahy did get their first point from play six minutes before the break. Three minutes later Jack Kennedy pointed his fifth score and JK Brackens’ first from play. David O’Shea added their second from play just before the half time whistle, as JK Brackens retired leading 0-6 to 0-2.

Arravale Rovers were far more confident in the second half and willing to work a lot harder. They had more players running off the ball as support, with Cian Ryan now getting forward and Donagh Hickey getting on top around the middle.

Mikey O’Dwyer was now a target in the full forward line, claiming a lot of possession, while the two Leahy brothers dropped back and then drove forward at every opportunity.

As the half progressed Johnny Ryan was released from his man-making duties and he was constantly going forward. James Hogan came further out the field, kicking two points in the opening six minutes, one from play and one from a placed ball.

JK Brackens now struggled to get the ball into the Arravale half of the field. It was almost the end of the third quarter before Jack Kennedy ended their scoring drought.

It looked as if they would build on this but Arravale were resilient and in a four- minute spell tied the game for just the second time. Wing back Tony Byrnes got in for his first and then two from James Hogan (from play and a placed ball) followed.
The drawn game was short-lived, with Conor Cadell kicking JK Brackens back in front. Goalkeeper Kuba Beban then came up the field to kick a free, stretching the advantage.

Arravale tried to work a way past the Brackens defence but with numbers back and the lead on their side they managed the game out well to take full points.