Son of the great Tom Semple after whom Semple Stadium is named, is honoured for support of the arts 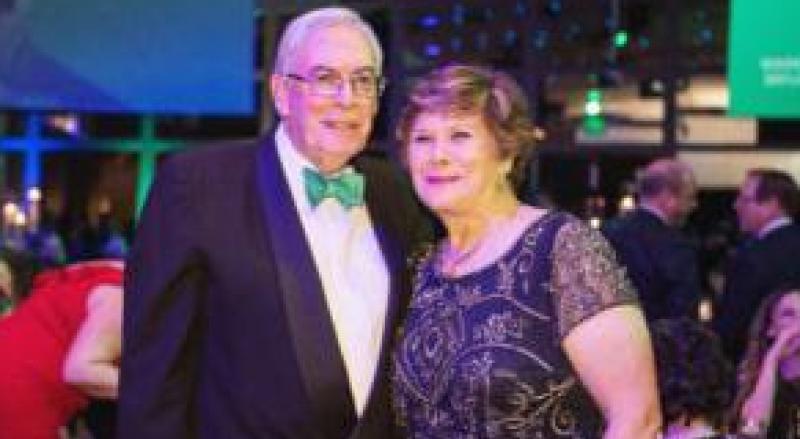 A Thurles man who hails from a family name of long links and associations with the Cathedral Town, has been honoured for his contribution to the arts in the United States.

Martin Semple, of the famous Semple family, Thurles, and his wife Jo - both regular visitors to these parts - were honoured following the completion of a term of office as Chairman of the Denver Center for Performing Arts.

The Semple name was synonmous with the arts in Thurles through the years with a quite a few family representatives taking to the stage with Thurles Musical Society and the former Parnell Players. Of course the hurling mecca which is Semple Stadium, is named after the great Tom Semple, Martins father, - an honour of which the entire family are justifiably very proud.

Five years ago on July 1, 2017, Martin became only the third Chairman of the Denver Center for the Performing Arts. Yet he was anything but new to the organization.

In fact, Martin, a partner in the Denver law firm of Semple, Farrington & Everall, has been the DCPA’s legal representative since before the company opened in 1979.

As an inaugural subscriber, he and his wife Jo, have seen nearly all of the 400+ productions of the DCPA Theatre Company as well as an enviable list of Broadway tours.

Martin joined the DCPA’s Board of Trustees in July 2007 and succeeded Dan Ritchie as Chairman a decade later. As Chairman, he oversaw a period of extensive change, ambition and resiliency. Under his leadership, the Board welcomed eight new Trustees, implemented an executive committee, and expanded the scope of its supporting Finance, Education, and Governance & Nominating committees.

Additionally, the organization embarked upon the most ambitious project in its Master Plan — the $57 million renovation of the Helen Bonfils Theatre Complex, which included more than $31 million in bond funding from the City of Denver and a capital campaign that raised over $17 million including 100% participation from this board.

Also under his guidance, the organization launched Theatre for Young Audiences, which introduces tens of thousands of PreK through to third grade students to theatre; expanded Off-Center which reaches tens of thousands of patrons through immersive theatre; hired the DCPA’s first-ever Executive Director of Equity and Organization Culture, and led the board’s unanimous adoption of an Equity Statement.

He proved to be a steadfast leader, first, to help the DCPA attract nearly 942,000 guests in its FY19 fiscal year; then, to offer thoughtful, compassionate guidance through a global pandemic, and finally, to catapult the organization into a period of
recovery.

Known to employees as a kind man with an endearing Irish brogue, Martin Semple placed a tremendous emphasis on the needs of employees. He and the Board approved funding to provide health benefits to furloughed staff during the pandemic, raised salaries as soon as possible upon the resumption of programming, and has even been known to dole out treats from an ice cream cart at company meetings.

Martin, who also takes a very keen interest and supporting role in St Mary’s International Garden of Remembrance in Thurles, proved to be a steadfast leader, first, to help the DCPA attract nearly 942,000 guests in its FY19 fiscal year; then, to offer thoughtful, compassionate guidance through a global pandemic, and finally, to catapult the organization into a period of recovery.

Martin graduated from St. Patrick’s College in Thurles  and earned law doctorates from Catholic University in Washington D.C. and the University of Denver Sturm College of Law.

He specializes in public and private sector labor and employment law and represents nonprofit organizations, school districts and cities among other client groups. Additionally, he has served as an Adjunct Faculty member at the University of Denver.
“On behalf of the Board of Trustees and staff of the Denver Center for the Performing Arts, we would like to thank Martin and Jo for their contributions to our 43-year-old organization,” said President & CEO Janice Sinden.

She continued: “Their passion, generosity and leadership have helped the DCPA to be a vibrant cultural destination for residents, an economic driver for business, and a national leader in new play development and immersive work.

“Your contributions will live on in our incredible new facilities, the excitement sparked in new generations of theatre goers and the passion that you share with our theatre patrons.”

Martin was succeeded by Hassan Salem, Head of Commercial Banking for U.S. Bank, who will serve as the DCPA’s fourth Chairman with his term beginning on July 1.