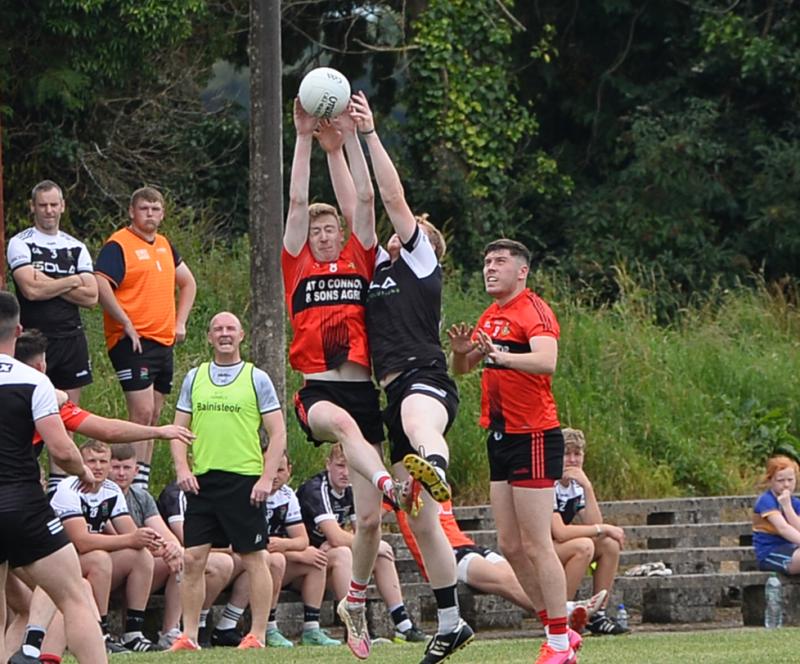 Leading by seven points with as many minutes to play, JK Brackens had some anxious moments before finally securing the victory over Ballyporeen at Cashel on Sunday that ensured them a place in the knock-out stages of the FBD Insurance county senior football championship.

The Templemore lads were coasting against an under-performing Ballyporeen side who must now beat Arravale Rovers in round three of group four if they are to join J K Brackens in the quarter-finals. From the first minute when Conor Cadell netted, it was Brackens who called the shots and, with Dean McEnroe looking particularly sharp, notching two points, they reached the first water break leading 1-4 to no score.

Indicative of the kind of day that was unfolding for Ballyporeen, Conor Sweeney, their ace marksman, missed two frees in the period.

In a game that had a surprising “edge” to it, Ballyporeen did better in the second quarter, but Brackens were still in control, reaching half-way with a 1-7 to 0-3 advantage.

A big improvement was needed from Ballyporeen in the second half but it did not materialise to any great extent as Brackens, having eased the foot off the pedal, still extended their lead in the third quarter to 1-11 to 0-6 and it seemed all they had to do was run down the clock in the last quarter to ensure their victory.

After Jack Kennedy for Brackens and Thomas Vaughan for Ballyporeen exchanged points on resuming, Brackens were caught napping when a quickly taken Conor Sweeney free in the 53rd minute set up Fionnan O’Sullivan who expertly executed the opportunity presented for a goal that brought Ballyporeen right back into the game(1-8 to 1-12).

Conor Sweeney pointed a free to leave only one score in it but Jack Kennedy gave Bracken’s goal the protection of an extra point a minute later. In the 59th minute Conor Sweeney again pointed a Ballyporeen free making it an anxious closing minute for the Mid lads who, however, did enough to keep themselves out of further trouble.

JK Brackens are in a good place right now with both football and hurling thriving, each feeding off the other’s success. Their remaining game in the group is against Eire Og Annacarty but Brackens now have some breathing space with a quarter-final spot assured. Having reached the county final three years ago, they are now a more mature outfit and could be a force to be reckoned with when the serious business of the champions gets under way.

Ballyporeen, on the other hand, will have to be greatly improved as they face Arravale Rovers in the last round, Rovers too needing a win to go through to the last eight. A repeat of the off-colour showing of the first forty five minutes could end their season. Ballyporeen have the talent but need to address their application.

There was much to admire in JK Brackens opening twenty minutes as they swept past the opposition with pace and purpose. Dean McEnroe was having a” stormer” as was Shane Doyle and Conor Cadell, but all round they had the measure of their rivals. Paddy Cadell, Neil Quinlan and Shane Bourke were also working their socks off throughout.

Ballyporeen have some work to do to get themselves in the right frame of mind for their crucial third round tie. Perhaps the dead heat drained them, but it was the same for both teams.

In any event there is no room for error now and the focus has to be on getting a result against Arravale if they are to stay in the championship race. Eoin Morrissey, Dean Finn, Tommy Sweeney, Noel Vaughan, Riain O Callaghan, and Conor Sweeney did their best to rally them when things were going badly.