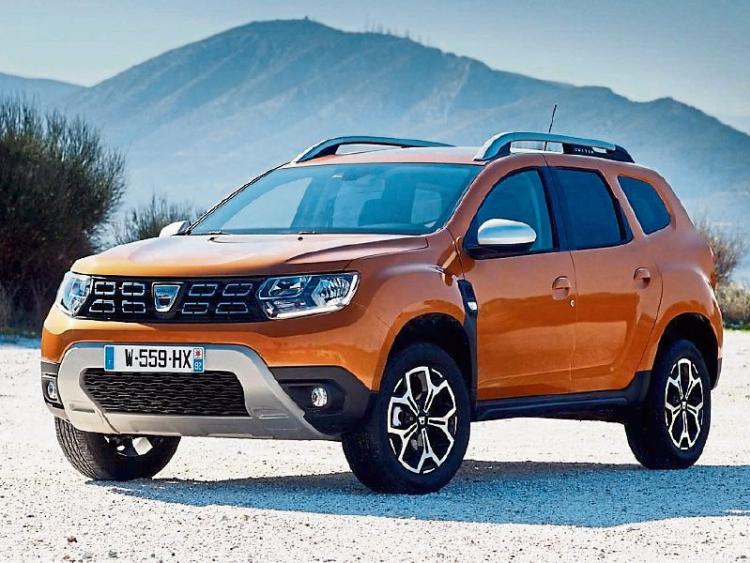 There are a lot of Dusters on the road right now and with Dacia having just launched the brand new second generation vehicle, prepare to have your head turned again.

When it burst onto the market a few years ago the Dacia Duster turned a hell of a lot of heads in the motor trade. Suddenly, here was an affordable SUV for those who usually traded in the used car market.
Granted, the vehicles were a no -frills buy – a little like purchaisng a Ryanair ticket to London. But, Ryanair do get you there, and so too did the Dacia Duster for customers in Tipperary who voted with their feet and made their way to Cleary Motors, Loughtagalla, Thurles to check it out.
There are a lot of Dusters on the road right now and with Dacia having just launched the brand new second generation vehicle, prepare to have your head turned again. This is not just a new vehicle, it is an entirely new concept and for the money involved again, the new Duster is absolutely mind blowing.
The overhaul of the SUV now gives you a real choice when it comes to choosing such a vehicle. Its looks have been bettered 100%; it drives with magnificent assuredness and competance; and the interior is stunning. In short, the new Duster is an entirely new car with an entirely new mindset.
Aside from the price, forget about the budget-buy tagline which has been a real feature of Dacia. This does not feel like a budget buy. It is much more up-market with comfort levels to rival any of the best, bells and whistles aplenty, even in the base model, and flexibility which makes this a very viable option for families, commercial travellers, thrill seekers and indeed anyone who wishes to motor in comfort.
Comparing the two Dusters has been a real eye opener. The first generation has been a wonderful vehicle for owners – economical, reliable and cost effective. But, comparing it with the new Duster is like comparing chalk and cheese – there is simply no comparison. That's not to say that the older version has diminished from its standing, because it has not. But, the new version has turbo boosted way up the track to really really impress.
The drive in the new Duster is so much better with greatly reduced road noise, a fantastic technology package, easy manual transmission, but the same economy at the pumps. However, it is with the looks that this really wins – it is simply stunning, inside and out, with the seating really comfortable too. If you test drive the new Duster it will be hard to sit back into the older one, that's for sure.
Cleary Motors have just taken on the Renault SELECTION badge which effectively means that they are now dealing with five different ranges – Renault, Renault SELECTION, Dacia, Renault EV, and Renault Commercial.
Renault SELECTION used car programme offers a minimum of two years’ warranty together with two years’ roadside assistance on used Renault or Dacia models up to six years old. In addition to this, participating Renault dealerships will also provide a full vehicle history check with every car and will prepare their cars to a unique “Buy Today – Drive Today” standard which ensures customers receive only the highest-quality product.
To make the Renault SELECTION purchase even more seamless, Renault Bank will also be an integral part of the programme providing a one-stop finance solution for all customers. Renault SELECTION is a new standard in the used cars market which is built with the customer’s
peace of mind at its core. To demonstrate Renault Group’s confidence in the vehicles it sells, dealerships will exchange a vehicle purchased under the programme with one of a similar value (within 30 days or 1,000 kilometres from date of delivery) should an irreparable fault occur.
The rates being offered by Renault Bank are extremely competitive too and anyone thinking of changing their car for a new or used vechile, should check this out.
A lot to take in, granted, but a quick trip to Cleary Motors, Loughtagalla, Thurles will square a lot of circles for interested customers – take particular note of the new Duster and the SELECTION models.