GOALKEEPER ODHRAN IS THE HERO

Mid Tipperary side Moyne/Templetuohy pulled off a major shock at Leahy Park, Cashel on Sunday afternoon when they overcame hot favourites Ardfinnan by 0-10 to 0-9 in the first round of the County Senior Football Championship.

The hero of the hour was the Moyne goalkeeper Odhran Lloyd who in time added-on at the end of the game cooly slotted a 47 metre free over the black spot to give his side an incredible win. Thereafter there was only time for the kick-out as Paddy Russell’s final whistle witnessed scenes of great joy amongst the Midmen as they celebrated the shock of overturning the pre-match raging hot favourites.

It all looked so unlikely early in the game when the John Evans managed Ardfinnan raced into a four points lead after just eight minutes. A Billy Hewitt free was followed by two superb points from Michael Barlow as well as a brilliant effort from Gavin Whelan. It seemed the game was going to go in the way many would have anticipated, but in an even easier fashion. 'The Maroons' were enjoying plenty of possession but a terrible over-elaboration of passing at times denied them scores when points seemed to be there for the taking.

A Joe Hassett free in the 10th minute settled Moyne/Templetuohy and two further points from Conor Bowe and the hard-working Tom Meade had the outsiders back to just a point when the first-half water break arrived.

Well settled at this stage after the early nerves, a superb left-legged point from 40 metres by midfielder Thomas Hassett had the sides all square by 24 minutes.

Michael Barlow’s third point of the first half, another excellent effort, sent Ardfinnan to the break leading by 0-5 to 0-4.

Inside a minute of the resumption Billy Hewitt had Ardfinnan two up with a free, but within six minutes Moyne/Templetuohy were back at parity at 0-6 apiece when Conor Bowe pointed and John Hassett sent a 30 metres free over.

The game was anyone’s at this juncture. Colin O’Gorman put in great work to finish with a well-deserved point to edge Ardfinnan ahead once again, but this advantage was cancelled out almost immediately when Tom Meade finished a free-flowing movement involving Joe O’Grady, Jason Bergin and Gearóid O’Connor. 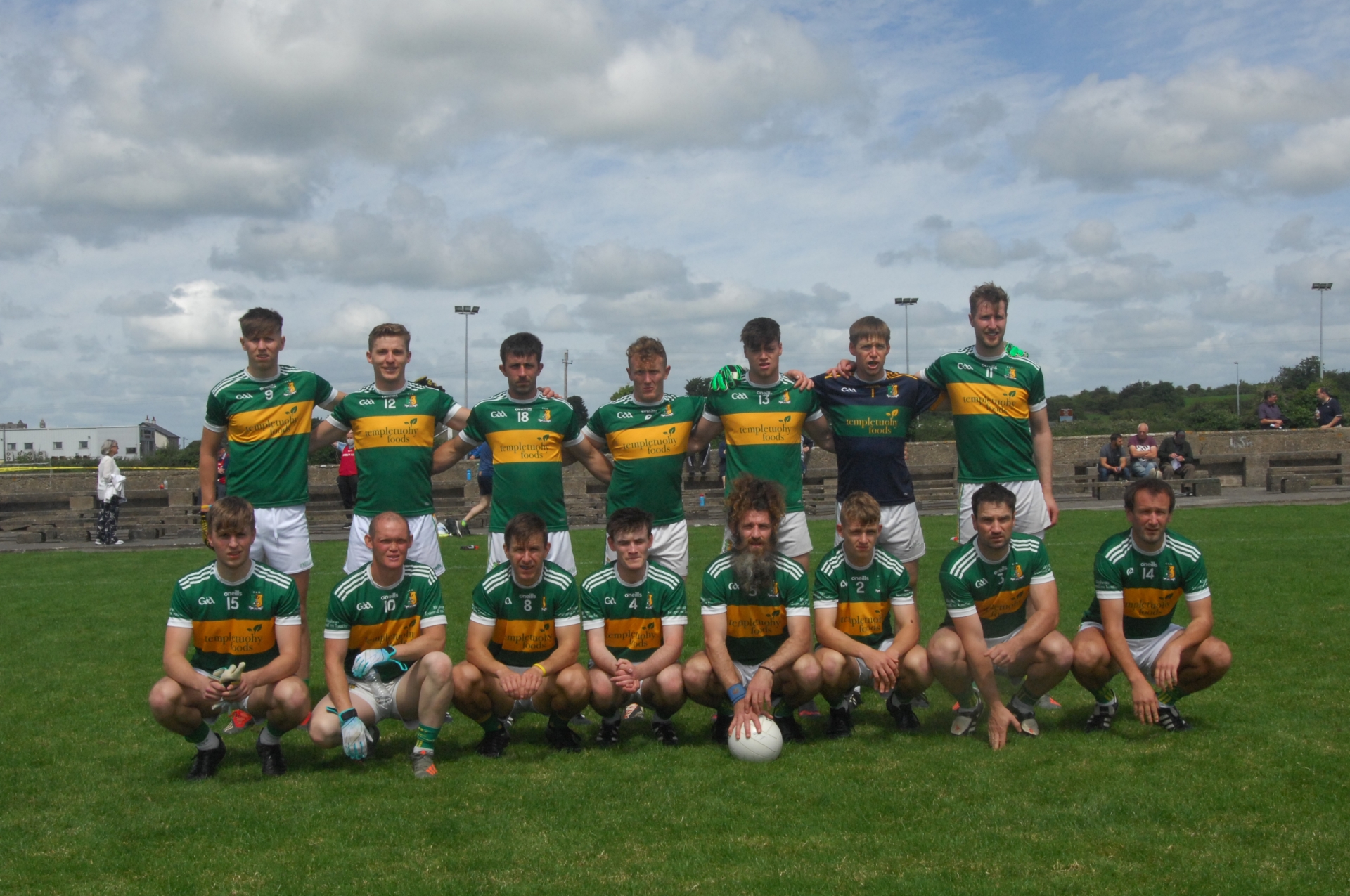 The Moyne/Templetuohy starting team against Ardfinnan at Leahy Park, Cashel, this afternoon. They recorded an historic win when overcoming the fancied South Tipperary side.

On 43 minutes, Eddie Kelly’s side hit the front for the first time with Conor Bowe kicking another superb point for Moyne. And they looked to be getting even stronger when another length-of-the-field passing movement saw Gearóid O’Connor put them two clear in the 50th minute at 0-9 to 0-7.

But Ardfinnan weren’t about to roll over and their captain Gerry Cronin showed them the way back kicking a huge point from 45 metres to bring the game back to the minimum.

In the 63rd minute Cronin took on the responsibility of a long range free from 48 metres and put it comfortably between the sticks for what seemed like a match-ending draw.

But there was one sting left in the tail still with Odhran Lloyd coming upfield to take on the challenge of a match-winning free, and Stephen Cluxton style, he planted it firmly over from 47 metres for a famous victory for Moyne/Templetuohy. 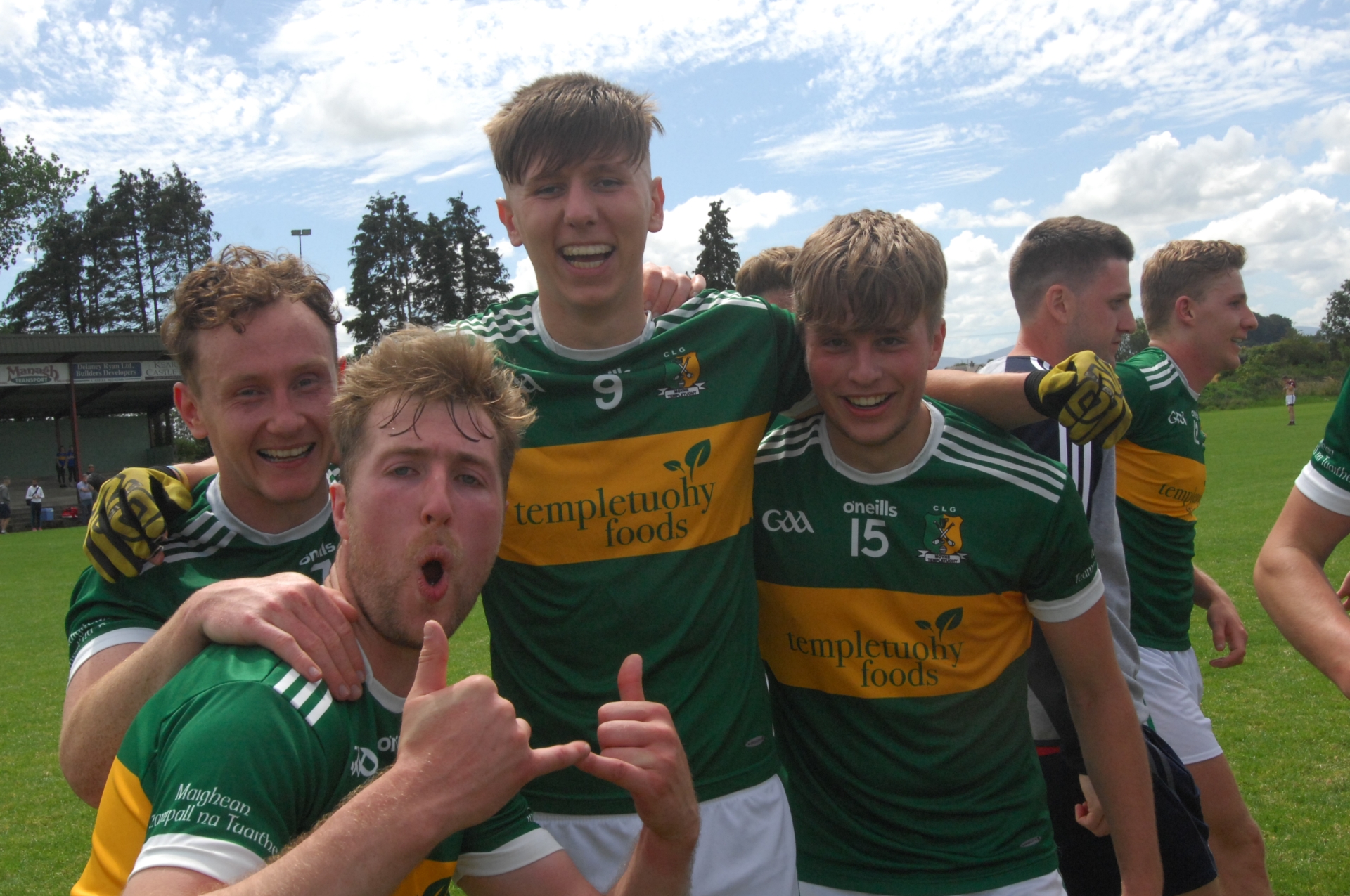 County intermediate champions from two years ago - won the same day that Ardfinnan were competing in the senior final - Moyne/Templetuohy will be delighted with this major boost.

It was an all-round team performance that got them over the line with the likes of Conor Bowe, Thomas Hamill, Thomas Hassett, Gearóid O'Connor, and captain Tom Meade all playing huge parts, not forgetting the hero of the hour, Odhran Lloyd who also made an important first half save from Gavin Whelan when a goal was on.

Ardfinnan will be bitterly disappointed with this setback, particularly after a good start. They will regret a lot of scores they left behind with over-passing, while a long range effort just before half-time by Gerry Cronin that wasn't allowed was marginal. They also had a couple of kickable second half frees that went wide and will regret such profligacy now.

There were some good contributions though. Senior debutant Shane Keating did well in a backline as well as Jonathan Ryan, Darragh O'Leary and Colin O'Gorman. Gerry Cronin came much more into it at midfield after half-time but needed more support against a big Moyne/Templetuohy spine up the middle. Michael Barlow kicked some excellent points and will be disappointed with a few others he might have scored.