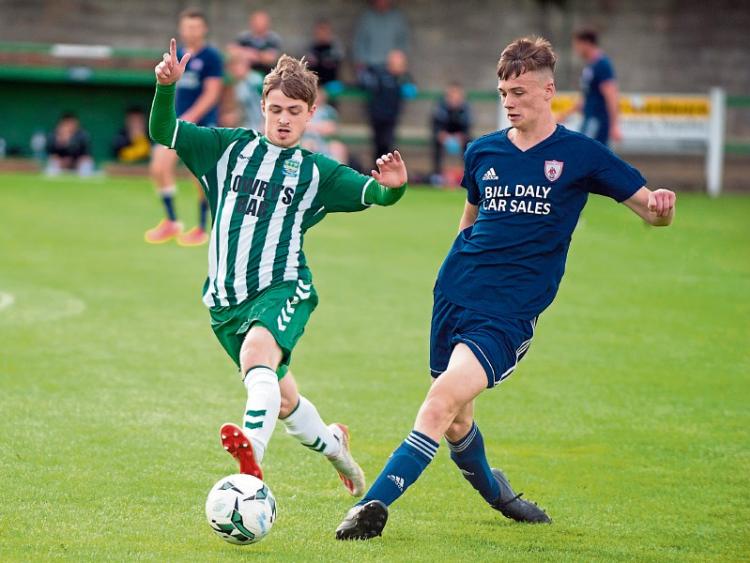 St Michael’s  were always the better team here against a Bansha side that set up very deep and were territorially dominated for much of the game, as the champions continued in their quest for another domestic double.

The players were barely warmed up when the hosts struck as Colin Bargary made it a goal to nil in the fourth minute, heading home a Gavin Dillon cross at the far post.

Sean Daly almost hit back shortly afterwards for Celtic but his effort went behind, and Calum Fanning did well in the 14th minute to get down to his right to save after Jimmy Carr had cut in from the left following good approach play between Richie Ryan and Gavin Dillon.

The home side eventually doubled their lead in the twenty third minute when Chris Higgins released John O’Brien down the left, and he found the onrushing Dillon to finish well to the corner of the net.

Both sides had some half- chances after that but there were no more goals in the first period. The hosts, though, quickly put the tie to bed with John Connery turning in a John O’Brien assist, making it three only two minutes into the second period. Gavin Dillon got his second three minutes later from a John Connery cross. He was denied his hat-trick almost straight away by the outstretched foot of Calum Fanning, and the visitors’ cause was made even harder shortly afterwards when they were reduced to ten men after a player picked up his second yellow card.

Ten became nine in the 74th minute, and the home side got their fifth minutes later when a defender was adjudged to have handled a Gavin Dillon cross and Joey Mulcahy made no mistake from the penalty spot.

The game petered out after that, reaching its conclusion with Saints going through to a semi final date with Peake Villa this weekend.