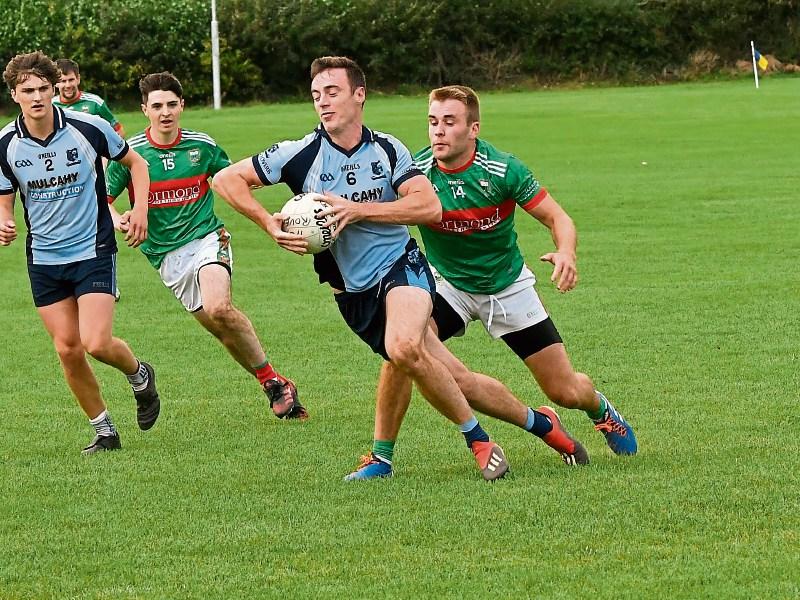 Loughmore / Castleiney booked themselves a place in this year’s county senior football championship final when they overcame Moyle Rovers by an unflattering four points at Boherlahan on Saturday afternoon last.
The double chasing side put in a workmanlike team effort over the hour which eventually saw them gain the upper hand in the final quarter. The stronger finishing Mid Tipperary outfit scored eight of the last 10 scores and the longer the game went on it seemed the more likely they were of winning it.
For a spell in the opening half, when playing with the wind, Loughmore looked to be going the better and led by 0-6 to 0-2 after 20 minutes but Moyle Rovers got a break before half-time with a penalty. A looping shot at goal by Riain Quigley rebounded off the crossbar and as Shane Foley ran in towards the ball he was taken out and Derek O’Mahoney signalled for a penalty. Liam Boland clinically converted low to the keeper’s left and the sides went to the interval all square at 0-9 to 1-6.
Rovers with the wind behind them now had the first two points of the second half and looked like they might drive on to clinch a place in the county decider. However, the bottomless well of spirit and determination that Loughmore/Castleiney are renowned for, once more came good with five points in a row in a 10 minutes spell to go 0-15 to 1-9 clear by the second half water break.
Again Rovers came with two white flags from Liam Boland to leave just a single point separating the sides with 57 minutes gone. This was as good as it was going to get though for the Monroe side with the Loughmore machine driving on again to score the last three points from Liam Treacy, Conor Ryan and Evan Sweeney – Treacy and Sweeney both second half impact subs. 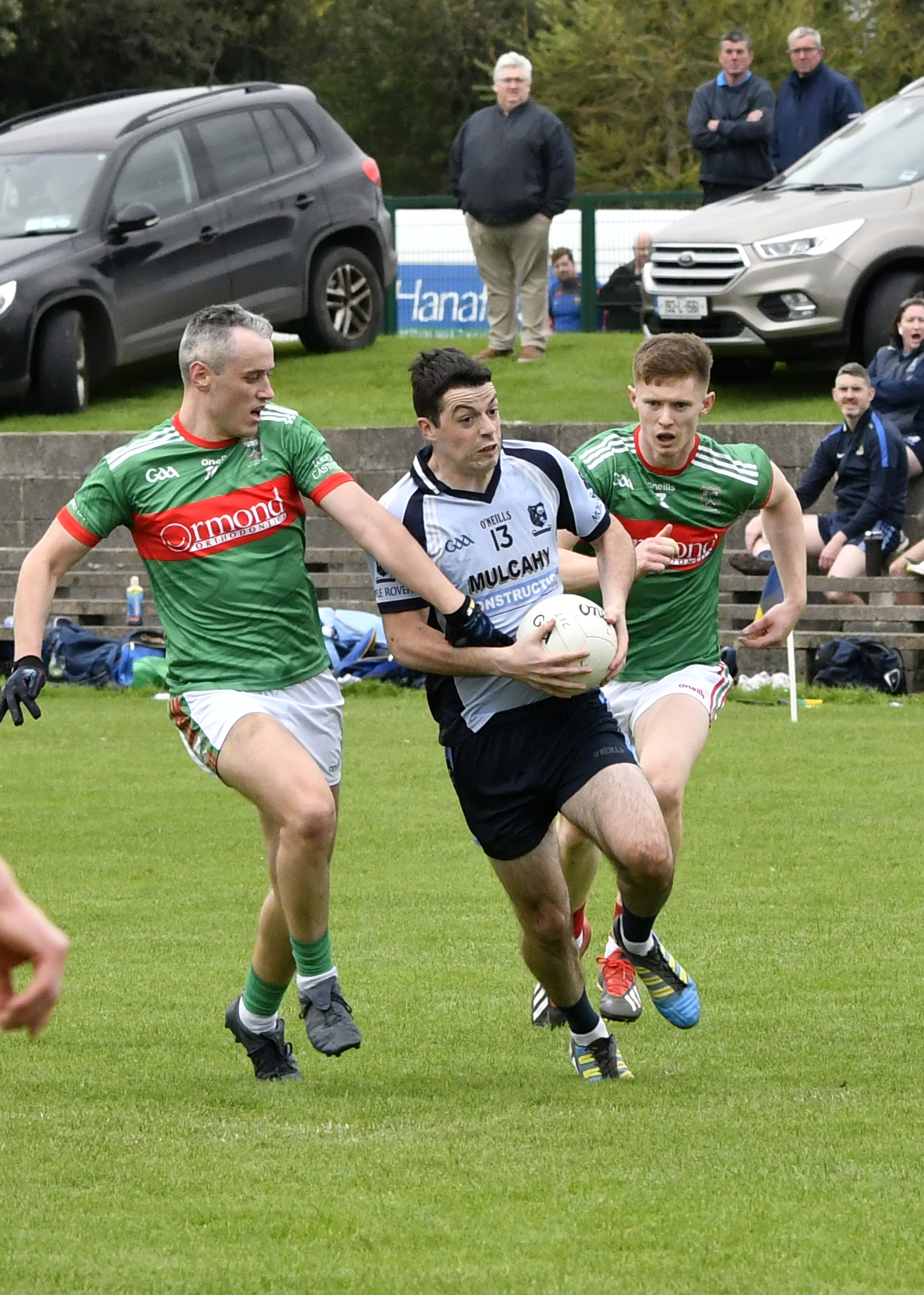 The game started in a lively manner with a pair of points from play apiece to leave it 0-2 to 0-2 after just six minutes, Ciaran Connolly and Conor McGrath for Loughmore bookending points from Rovers’ Riain Quigley and Liam Boland.
Four unanswered points from Aidan McGrath, Joe Nyland, Conor McGrath and a Conor Ryan free had the Mid side 0-6 to 0-2 by the 20th minute.
Stephen Quirke tapped over a free, followed by a lovely slick point from play by Liam Boland to reduce the margin temporarily before Frankie McGrath’s charges hit three more unanswered points to be dangerously five clear after 25 minutes, those scores coming from Conor Ryan (free) followed by an overlapping point from Eoghan Ryan and another from Conor McGrath that might have been a matchwinning goal with a little more experience and composure shown.
Moyle Rovers’ hardworking Tadgh Fitzgerald fisted a deserved point to stop the flow again before Rovers got that big break of a penalty expertly executed by Liam Boland.
Inside four minutes of the resumption Moyle Rovers were two to the good with a 45 metre mark from Liam Boland and a point from play by Stephen Quirke. The big full-forward won the long ball in and for once got away from his marker to give himself a great goal chance that went narrowly over the bar.
The next four scores were all frees - three Conor Ryan efforts for Loughmore with Stephen Quirke tapping one over for the Powerstown/ Lisronagh side. It made the scoreline all square once more after 42 minutes.
Loughmore then began to assert themselves with three points in three minutes from John McGrath, Conor Ryan and Conor McGrath and began to look likely winners once more. 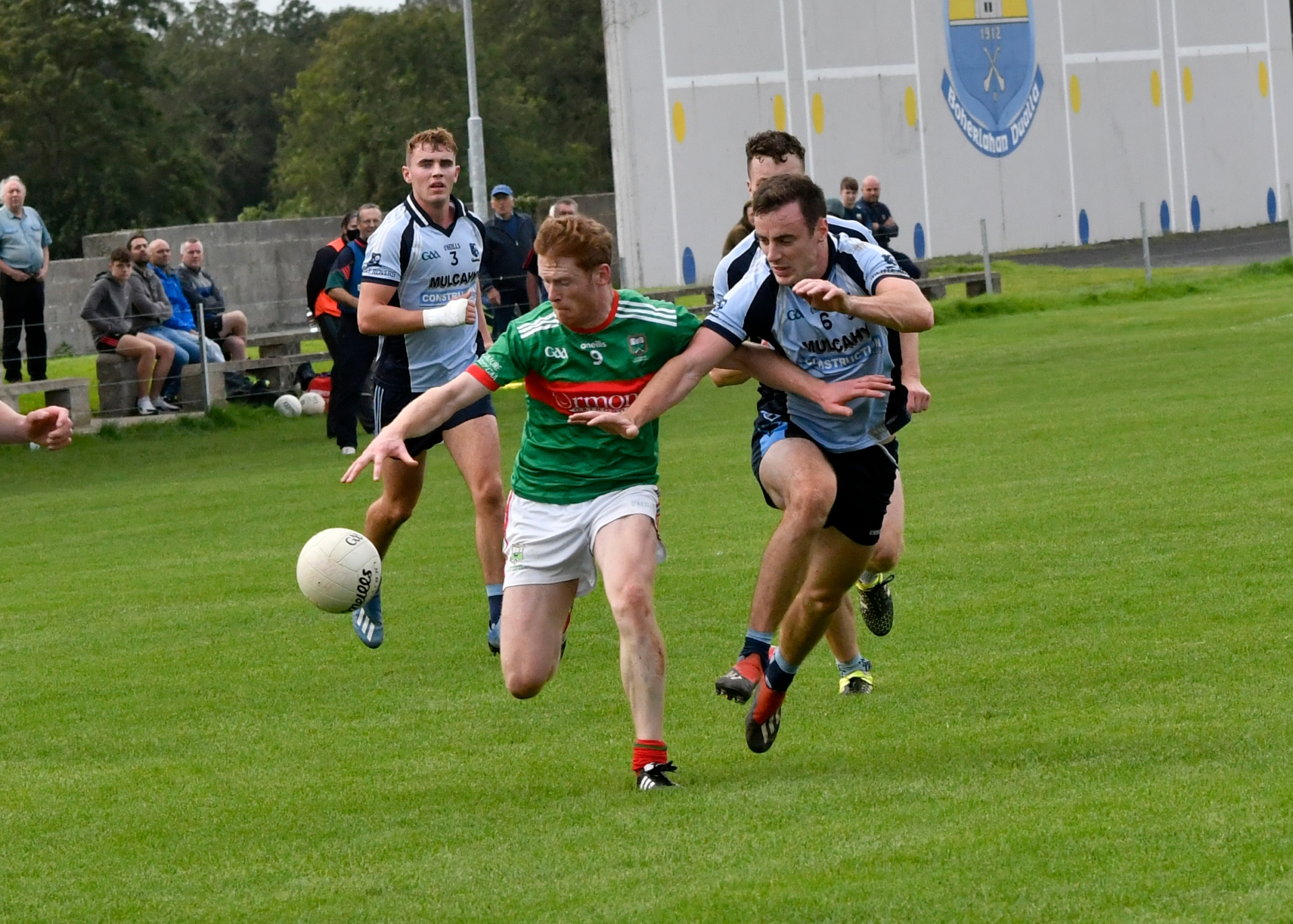 Joey Nyland (Loughmore) tries to hold off Moyle Rovers' captain Alan Campbell to get control of the ball.

A brace from Liam Boland (one a free) reduced the advantage to the minimum before Loughmore finished much the stronger with three without reply to book their place in the decider with Commercials - amazingly for the first time since 1994 when you consider that they have 10 titles between them in those intervening 26 years.
Overall though there was no doubting that Loughmore were deserving victors, with Brian McGrath, Noel McGrath, Joey Nyland and Ciaran McGrath on top in the vital midfield diamond area for the most part. In the inside forward line the two Conors - McGrath and Ryan - contributed 11 points, with John Ryan, Willie Eviston, John McGrath, John Meagher, Eoghan Ryan and Ciaran Connolly also playing their parts in this success.
Loughmore used four subs to telling effectand each contributed in getting them over the line – especially Evan Sweeney and Liam Treacy. Moyle Rovers on the other hand introduced no one when it looked like they needed fresh ideas and fresh legs especially near the end as Loughmore came in waves.
The Rovers will be disappointed with this outcome especially having gone two up with the wind at their backs early in the second half. Perhaps too much emphasis was placed on the direct long ball that didn’t exactly pay enough dividends in the scheme of things.
There were some good performances though but not enough, David McGrath, Tadgh Fitzgerald and Jack Harney got through a lot of work in defence, Ben Owens had some good moments too, but once more there was an over-dependency on Liam Boland to come up with the scores (1-6 of 1-11), Diarmuid Foley also did a lot of work up and down the wings. Scoring just two points from play in the second half was never going to be enough to get Rovers through to the final. 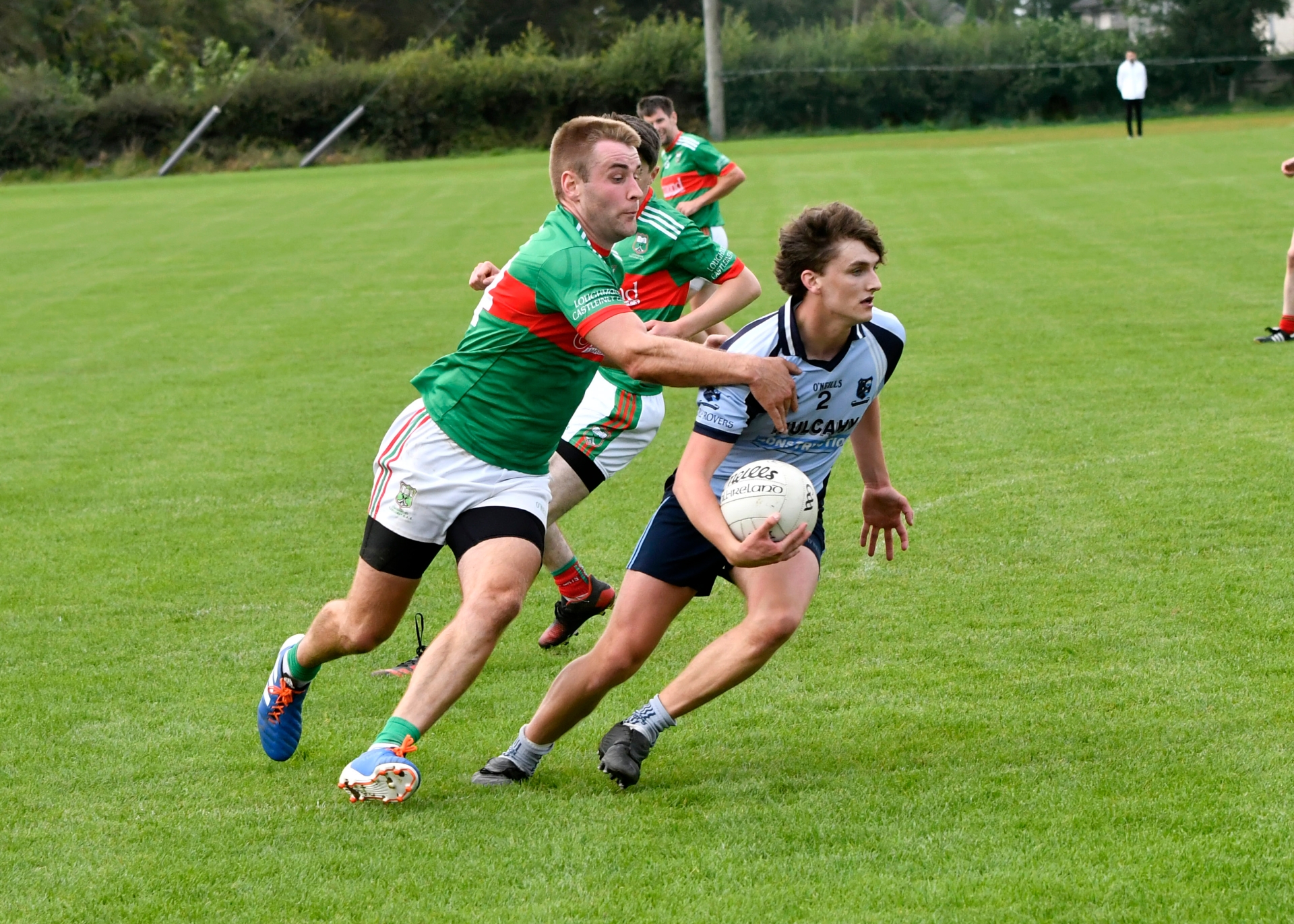