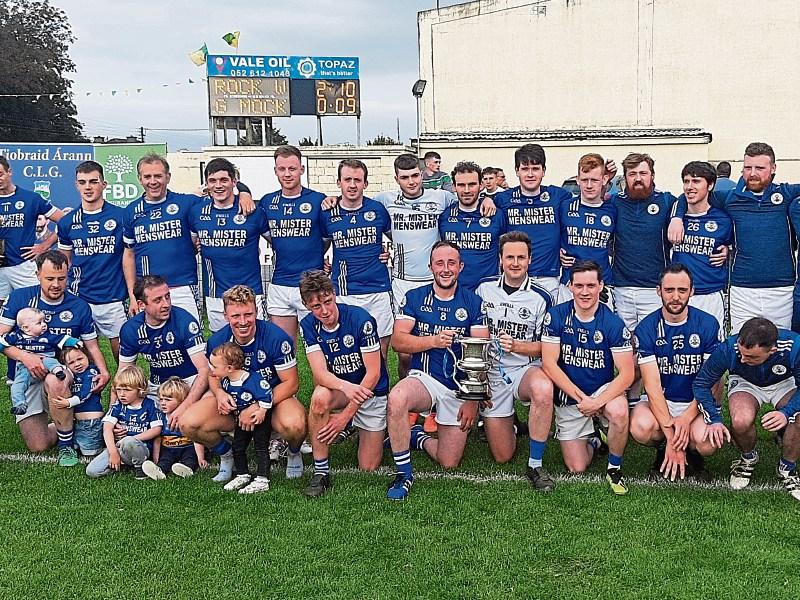 For only the second time in their history Rockwell Rovers are county intermediate football champions following their seven points win over Grangemockler/Ballyneale at Clonmel Sportsfield this afternoon (Saturday).

In a very enjoyable fast-paced game, played in a great spirit throughout, the New Inn side had that little bit of an edge on their young opponents. The wisdom of having been so near so often over the past number of years, plus an advantage of strength and experience stood to the Rovers. In the end they were fully deserving winners, taking their goal chances superbly and showing huge commitment in terms of work rate and effort over the hour.

And so a 33-year famine going all the way back to 1987 comes to an end. Aidan Barron in accepting the cup afterwards looked forward to a return to senior status for his club from next year onwards. No one can deny them that chance now.

As in the semi-final against Moyle Rovers, Rockwell Rovers got the perfect start in the final with a goal inside 30 seconds by full-forward Eoin Byrne. It came after TJ Ryan cut in along the end line, rounded his marker, and threw a measured pass into the path of the in-rushing Byrne who tapped the ball home with both hands.

It was a nightmare beginning for a young Grangemockler side who started with two minors and six under 21 players in their first fifteen. But credit to them they didn’t panic and went toe-to-toe with Rockwell Rovers after that setback, sharing the next six points, and after 23 minutes were still only trailing by three points, 1-3 to 0-3.

Those points for Grangemockler came from two John Lyons frees and a superb point by Mark O’Meara from 45 metres into the Cantwell Street end.

Rockwell’s first three points all came from play – and it was the pattern all day – they seemed to be able to take their scores that little bit more fluently. A long ball in by Gavin Ryan was marked by Alan Moloney who tapped over in the sixth minute. On the quarter hour mark TJ Ryan fired over a lovely left legged point and in the 23rd minute Eoin Byrne cut in from the Albert Street side of the field, and as the Grangemockler defenders backed off, he took full advantage to score.

Two points from play in the 24th and 26th minute from impressive Manus McFadden and Colin O’Shea made it a one-point game as Grangemocker ran at their opponents at every opportunity but a lot of final passes were also frustratingly going astray for Paul Cahill’s side.

Rockwell Rovers finished the first half well with two unanswered points of their own from Eoin Byrne (when a goal looked on) and a sweet effort from the excellent Gavin Ryan to send Stephen Quirke's side to the break leading by 1-6 to 0-6.

TJ Ryan had the first score of the second period in the 35th minute with a superb point on the run from 45 metres out to make it a four point game. However what was seriously impressive, especially in the second half, was the work rate of Rockwell Rovers in defending. Leader of that defence, Liam Fahey, was excellent all day long. Time and again they swarmed out the Grangemockler forwards who were too often forced to take a pop from outside their comfort zone after long passing movements that were going nowhere for the most part.

Grangemockler’s pace and fitness was being matched superbly at each advance by a fully committed blue blanket of Rockwell jerseys. There was a hunger present in the play of the West Division side that said they weren’t going home empty handed this time around.

The game’s clinching score – Rockwell’s second goal – came in the 39th minute.  A perfectly weighted long foot pass in by Gavin Ryan was brilliantly fielded by Alan Moloney who took on his marker before rocking the net with a left legged thunderbolt. It was as good a goal as you would see anywhere. At 2-7 to 0-6 it left Grangemockler/ Ballyneale with a mountain to climb.

A minute after delivering that exquisite pass Gavin Ryan was black carded which perhaps threw Grangemockler a lifeline with a 10 minute numerical advantage to follow.

They had three of the next four points. A white-flag from the hard-working Mark O’Meara was answered by an excellent score from Rockwell captain Aidy Barron, before points from Mickie Lyons and a John Lyons free made it a five point game with 10 minutes to go.

Grangemockler also created a great goal chance a minute later with a passing movement involving Manus McFadden, Colin O’Shea and Thomas Dineen to get John Lyons free but unfortunately for him the effort blazed wide.

The last two scores of the game came from an Alan Moloney free after Aidan Barron won a Grangemockler kick-out, and in the 60th minute a fine pass by Patrick Halley put TJ Ryan in, and the 2011 All-Ireland minor football winner, converted well.

At the death Rockwell Rovers were awarded a penalty after Eoin Byrne was hauled down. However, Alan Moloney’s low effort was well saved at the expense of a 45 by David Power in the Grangemockler goal.

This was a thoroughly enjoyable county final played on an excellent pitch at Clonmel Sportsfield.

Rockwell Rovers victory was 100% a magnificent team effort where everyone committed totally to the cause.

Alan Moloney was awarded man of the match, a performance capped by a super goal. The defence was well led by Liam Fahey while in midfield Aidan Barron and Eoin Shine played a huge part also. The inside line of the Ryan brothers, Gavin and TJ and Eoin Byrne were very dangerous combining to score 1-6.

Who was also outstanding and literally ran himself into the ground for the cause from the first minute to the last was Kevin Cleary at wing-forward and everywhere else too.

For a youthful Grangemockler/Ballyneale this was a bridge too far, a little too soon. But with youth on their side and with a second county final under their belts in 12 months there is plenty to look forward to for them. Apart from the two goals there wasn't much to separate the sides.

There was some very solid defending from the likes of Thomas Dineen, James Daly and Jack O'Hanlon, In midfield Colin O'Shea and Conor Hahessy were up against a very experienced pairing while others to stand out were Manus McFadden, Mark O'Meara, Mickie Lyons and Ben Comerford in the first half.