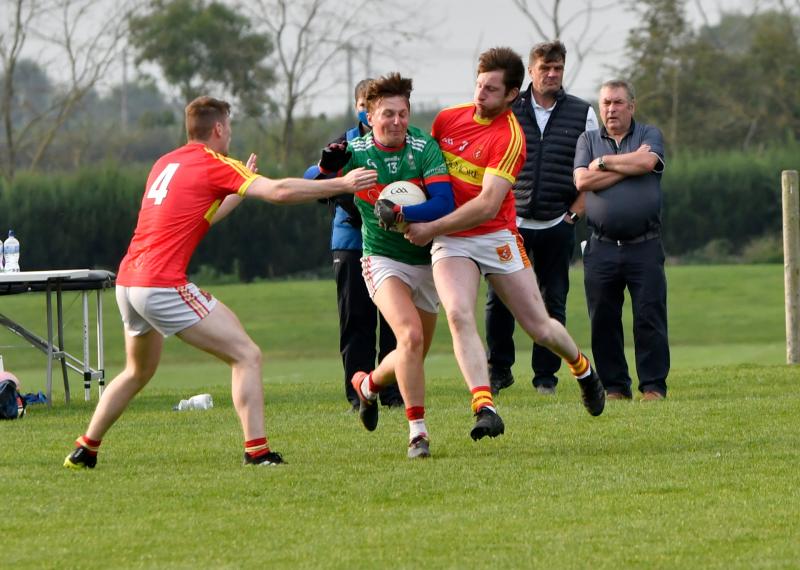 Loughmore's Conor Ryan tries to break through the challenges of Jimmy Feehan and Cillian O'Dwyer.

Beaten finalists last year, Loughmore-Castleiney had their backs to the wall to grind out a victory over Killenaule in a very competitive FBD Insurance County Senior Football Championship, Group 4, Round 1 tie at Littleton on Saturday evening last.
The expectation was that Loughmore would win this game but Killenaule, despite a few noticeable absentees, would not be beaten easily. And so it transpired as Killenaule were only two points adrift with six minutes to play but a late Loughmore goal by Cian Hennessy sealed the issue for the Mid side.
Indeed, it was the Loughmore goals which decided the game. The first came after 12 minutes when midfielder Joey Hennessy was on the end of a slick four-man move and netted confidently to put his team 1-1 to 0-2 ahead.
Loughmore led 1-3 to 0-3 at the water break but with Conor Ryan the key man, kicking four points, they dominated the second quarter to go 1-8 to 0-3 clear at half-time, Killenaule failing to raise a flag in that period.
It looked all over for Killenaule who also lost Michael Doyle to injury after an impressive first half, but in adversity the South lads rose to the challenge with gusto and it was they who had a distinct edge in the third quarter. They missed two goal chances but points from Joe O’Dwyer, Ciaran O’Dwyer and Mark Heffernan had the deficit down to five points. Mark Heffernan had a good goal chance but blazed wide after 45 mins and the second water break arrived with Loughmore leading 1-10 to 0-7 and still looking likely winners.
The Killenaule challenge continued to gather momentum, a brace of Joe O’Dwyer points and another from Ciaran O’Dwyer leaving them only a goal behind with eight minutes to play (1-10 to 0-10). A brilliant block-down by John Meagher on Paudie Feehan two minutes later was crucial as a goal looked certain, though Feehan did immediately point for Killenaule who were now trailing by just two points.
Loughmore know all about tight situations and they did not panic. In the last minute, in a break from defence, John McGrath provided the perfect pass for Cian Hennessy who gave Killenaule goalie Matthew O’Donnell no chance for the goal that put the issue beyond doubt.
By no means Loughmore’s best performance, this was good enough for the points and sets up a local derby with neighbours J K Brackens in the second round. They had some erratic attempts for points which, if taken, could have made life easier for them but nonetheless they will still be on everybody’s short-list as potential champions.
Conor Ryan’s point-taking (six in total, three from play) was key to their victory but John Meagher was a tower of strength in defence. Brian McGrath, Tommy Maher, Joey Hennessy, Noel McGrath and Liam Treacy were also in the thick of the action all through.
Killenaule’s performance was good enough to suggest they can still qualify from this group for the closing stages, particularly if absentees like John O’Dwyer and Declan Fanning are back. They next meet Rockwell Rovers in what is a “must win” game for both clubs, but there is no room for error now.
Paudie Feehan was their top performer but Joe O’Dwyer, Dean O’Connor, Killian O’Dwyer, Michael Doyle until injured, and Jack Hassett when introduced, also did their utmost to tip the scales in their favour.