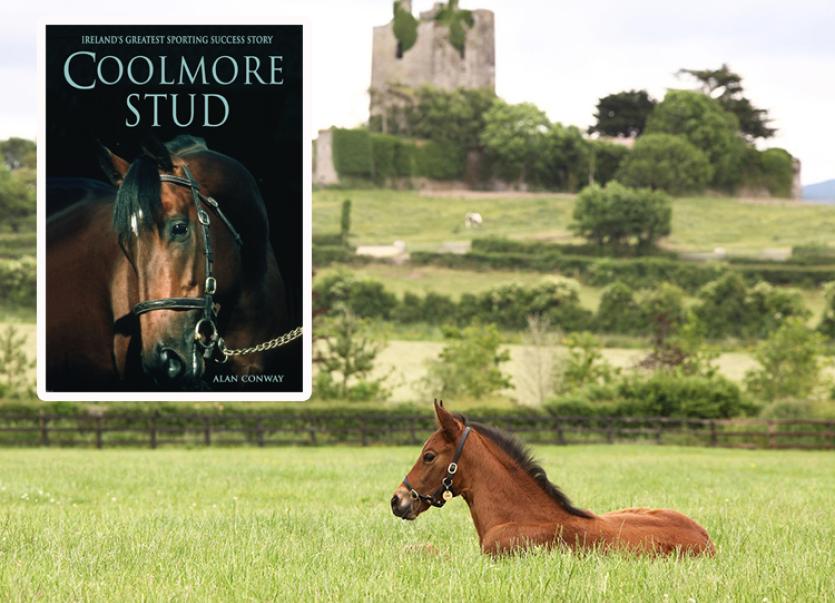 Alan Conway’s book on Coolmore Stud has been nominated for a Bord Gáis Energy Sports Book of the Year award - the winner will be announced on Wednesday, November 16th.

In ‘Coolmore Stud: Ireland’s Greatest Sporting Success Story’ author Alan Conway tells the story of how Coolmore Stud and its associated training operation at Ballydoyle have come to dominate the world of horse breeding and racing.

Coolmore Stud has created some of Ireland’s very greatest sporting moments - from Sadler’s Wells to Galileo, the breeding operation based near Fethard and its training partner at Ballydoyle has produced champion after champion.

Founded by the legendary Vincent O'Brien and developed by men like John Magnier and, of course, the quiet perfectionist Aidan O’Brien Coolmore Stud has grown from a simple farm into a behemoth of global renown.

From the days when Vincent O’Brien would guard against his great horse Nijinsky from getting worked up for a big race by placing cotton wool in his ears no short cuts are taken at Coolmore.

To this day the Coolmore operation is dedicated to detail, nothing is left to chance. Indeed, Coolmore features a veterinary hospital, operating theatre, lab, spa and a swimming pool while state of the art technology is used to enhance training. Thankfully, the passing of time has not diminished the breadth and audacity of Vincent O’Brien’s vision.

Published in a full-colour hardback by Mercier Press ‘Coolmore Stud: Ireland’s Greatest Sporting Success Story’ explores the fascinating world of horse breeding and racing. The book includes chapters on the best-known stallions, jockeys and the people associated with Coolmore while it also features chapters dedicated to becoming a champion the Coolmore way.

Employing the stories of the people involved and of the horses it has produced Alan Conway’s book charts the rise of one of Ireland’s greatest business and sporting success stories.

Alan Conway’s book on Coolmore Stud has been nominated for a Bord Gáis Energy Sports Book of the Year award alongside ‘Win or Learn’ (John Kavanagh), ‘The Battle’ (Paul O’Connell), ‘Blood, Sweat & McAteer’ (Jason McAteer), ‘My Life In Rugby’ (Donal Lenihan) and ‘Out Of Control’ (Cathal McCarron with Christy O’Connor) - the winner will be announced on Wednesday, November 16th.

Alan Conway was the horseracing correspondent for sportsnewsireland.com from 2009-12 while his work has also appeared in the Sunday Business Post, Club Rugby Magazine and Club GAA Magazine. Alan is also the co-author of ‘Running Through Walls: The Dave Langan Story’.