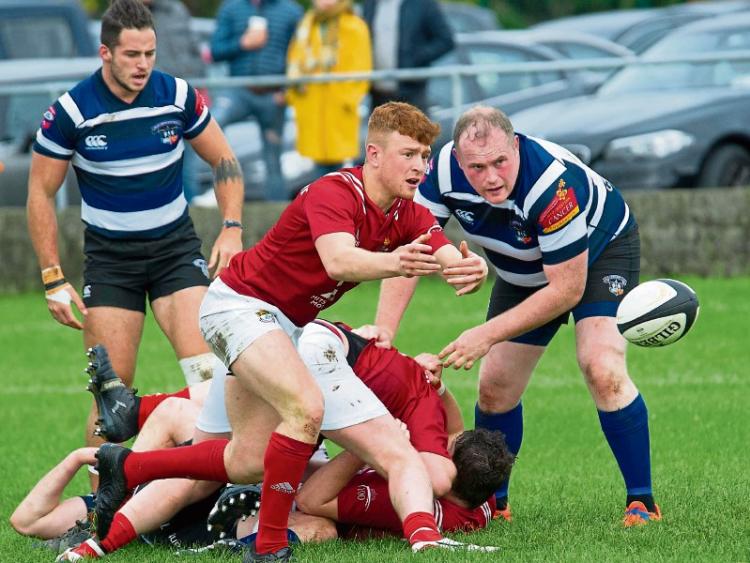 Cashel out-half Josh Pickering gets his pass away

Round six of the All Ireland League took Cashel on the long journey to Eaton Park, Ballymena on Saturday last,  a legendary rugby club that has produced many Irish internationals including Syd Miller and Willie John McBride and who were Division 1 champions in season 2002-03.

It was Cashel’s third game in-a-row against Northern Ireland opposition. With one win and one loss in this series of games it was important to put in a good performance.

Conditions were perfect and the home team were first off the mark with a number of probing attacks which resulted in them going ahead with a penalty for offside after two minutes.

Cashel gradually grew into the game and mounted a number of attacks. However a multitude of mistakes, with the last pass not going to hand and the ball being knocked on at vital times, denied them opportunities to score. It was frustrating for Cashel as they had plenty of possession but were not using it. It took them some time to get the lineout right as they have excellent jumpers in Ed Leamy and Fearghail O’Donoghue.

On 17 minutes Ballymena came raiding with their scrum half caught just short of the line. Paudie Leamy gathered a loose ball and sent a long clearance deep into the Ballymena half.

Five minutes later Ballymena had a scrum inside the Cashel 22. The visitors were solid in the scrum and while slightly stronger than the home team were gaining no major advantage.

Ballymena ran the ball to their centres but  Cashel’s Luke Duffy intercepted and ran to the home 22 where he was tackled, the cavalry arrived, Josh Pickering sent a long pass to Brendan Ryan and he ran to the left corner for a try.

From the kick-off the ball bounced behind the receivers into touch for a lineout to Cashel. However they were penalised in the lineout and Ballymena went ahead again with a good kick. Cashel began to exert their authority on the game. Richard Kingston won an excellent ball at the breakdown, Alan McMahon sent the ball to the corner but the throw was deemed to be crooked and Ballymena worked their way upfield to their 10m line. The ball went loose in a ruck, James Kendrick picked up and offloaded to Ed Leamy who made it to the 22 where he offloaded to Richard Kingston who raced under the posts. Aidan Barron converted to put Cashel 12 points to 6 ahead at the break. Cashel fully deserved the lead as they did not panic when things were going wrong and they took their chances when they were presented.

Ballymena started the second half as they had the first and narrowed the gap with a penalty three minutes after the restart. The game was now poised on a knife- edge and cool heads were required.

Cashel were reduced to 14 men for killing the ball but they survived the ten minutes with good defensive work. It must be said the Cashel defence was superb all day with some excellent tackling particularly from Conor Cashman, who turned in a wonderful performance and was awarded the man of the match award by the home club. Alan McMahon was also very solid in this area.

Cashel also used the maul very effectively and drove the home team back on a number of occasions.

On 57 minutes they drove over for their third try, with Brendan Crosse touching down. Eamon Connolly converted with a confident kick. He had just come on the field and showed some deft touches while on the ball.

With eight minutes remaining it was Ballymena’s turn to intercept when they got possession on their own 22, a probing kick behind the defence put Cashel on the back foot but Fearghail O’Donoghue got back on time to save the day. Conor Cashman put in another try- saving tackle late in the game.

With time running out Cashel went in search of the bonus point and put severe pressure on the home side. They could not break down the home defence.

Ballymena broke swiftly to the Cashel twenty two where they were awarded a penalty which was calmly converted by their substitute number ten to earn them a losing bonus point, which they deserved.

Cashel took the four points, which was an excellent result away from home. Their patience and ability to apply pressure at vital times stood to them.

The All Ireland League takes a break this weekend.