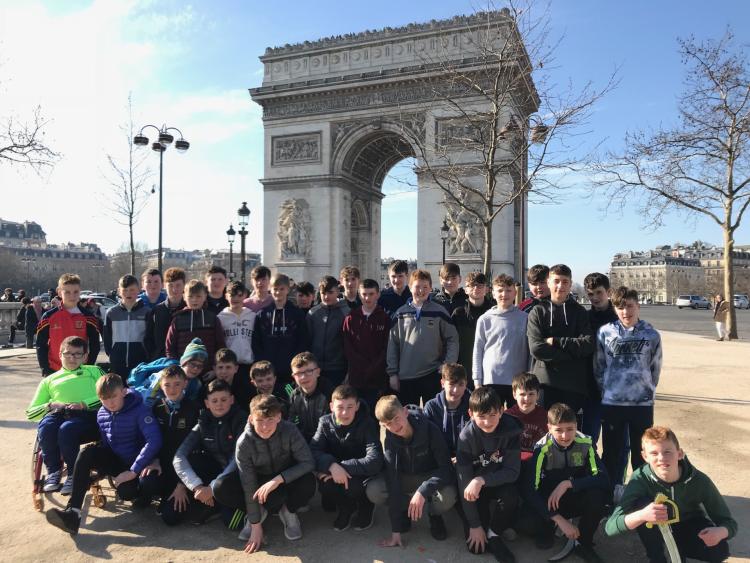 In the early hours of last Wednesday morning thirty seven of our first year students arrived safely home in Dublin Airport having spent the previous four days in Paris. During their sojourn in the French capital they participated in a wide array of activities designed to improve their linguistic abilities and give them a taste of Gallic culture.

On their first morning in Paris they enjoyed a guided bus tour of the city before having lunch in a nice restaurant on
the Rue Rivoli. Afterwards, the pupils visited Notre-Dame Cathedral and took a stroll around the historic Notre-Dame area. The following day saw a visit to the Louvre where they were given the opportunity to appreciate the museum’s impressive collection of fine art: including, of course, the Mona Lisa.

Following this the students visited the Arc de Triomph, ascending to the top to take in the awe-inspiring panoramic view of the city. The afternoon was capped off with a visit to the Eiffel Tower and that evening the pupils enjoyed a fun and relaxing couple of hours at a local bowling alley.

Monday was spent at Disneyland, where Thunder Mountain and the Rock N Roller Coaster appeared to be the star attractions for the boys. On the final morning the group strolled around the historic Montmartre area of the city and visited La Basilique du Sacre Coeur. Later the pupils were given a guided tour of the Stade de France before stopping at a shopping centre en route to the airport to pick up a few souvenirs. Needless to say, it was a very educational and enjoyable tour.