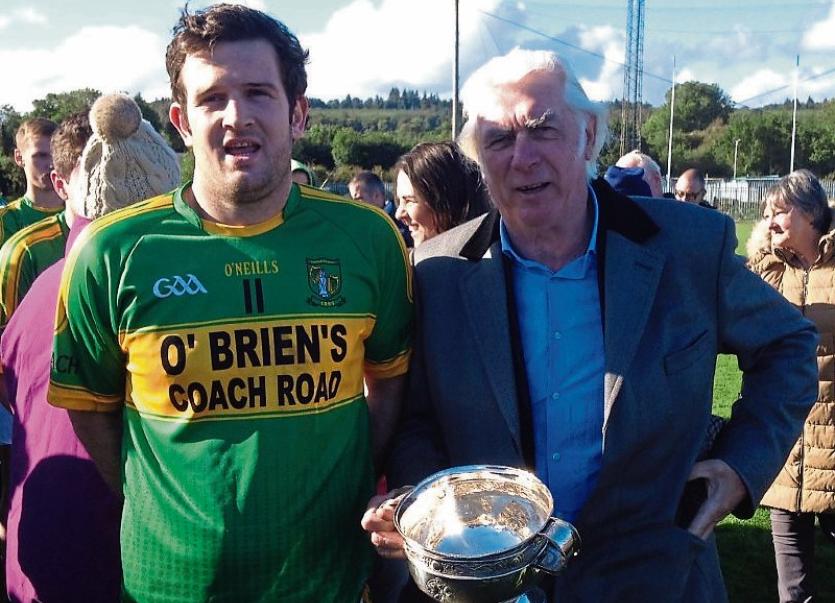 Aherlow Gaels are Rea Clarke Hennessy West Senior Football champions for the first time in six years after they overcame the challenge of Galtee Rovers in Dundrum on Sunday last.

For Aherlow this was a must-win game after they failed to qualify from the county group stages, while Galtee Rovers had the safety net of having already qualified.

The seeds of Aherlow’s victory were sown in a very strong first half performance, when they played with the advantage of the breeze.

Colin Morrissey opened the scoring with a pointed free after three minutes. Aherlow Gaels were slow to get going but when they did they hit a purple patch. In a three- minute spell they struck 1-3 from play. First Sean Kiely goaled and this was followed by points from Kevin Franks, Barry Grogan and Mark Russell.

Shane Egan responded with a free for Galtee Rovers but Aherlow Gaels continued to dominate. Bernard O’Brien pointed from a free before Barry Grogan added another from play. Grogan’s point could easily have been a goal. Sean Mullins got in for a point and this was quickly followed by Grogan’s third of the game.

Denis Peters saw his goal chance cleared off the line by John Moloney at the other end as everything was going right for the Gaels. At this stage Colin Morrissey moved out to half forward and Kevin Power got Galtee’s first score from play after 25 minutes. Bernard O’Brien responded at the other end with his second of the game. Aherlow Gaels lost Eoin O’Connell to a black card just before the break and he was replaced by Cathal Dillon. Aherlow Gaels led at the interval by 1-8 to 0-3, with 1-7 of their scores coming from play.

The second half was slow to get moving on the scoreboard, though Gordon Peters was called into action when he made a very good save from Bernard Fitzgerald.

Sean Kiely and Kevin Franks pointed in the opening ten minutes of the half to extend the Gaels' advantage.

With almost 20 minutes of the half elapsed Sean Daly pointed Rovers' first of the half while at the other end Bernard O’Brien responded with Aherlow's first point in 12 minutes.

Rovers continued to try and work goal chances but were struggling to find a finish. Shane Egan and Bernard O’Brien swapped points from frees before Bernard Fitzgerald eventually got a goal for Galtees.

Colin Morrissey added a point from a free to reduce the deficit to six points. Gordon Peters again saved excellently from Shane Egan to deny Rovers again. Sean Kiely, though, put the icing on the cake when he goaled to round off a great day for Aherlow Gaels.