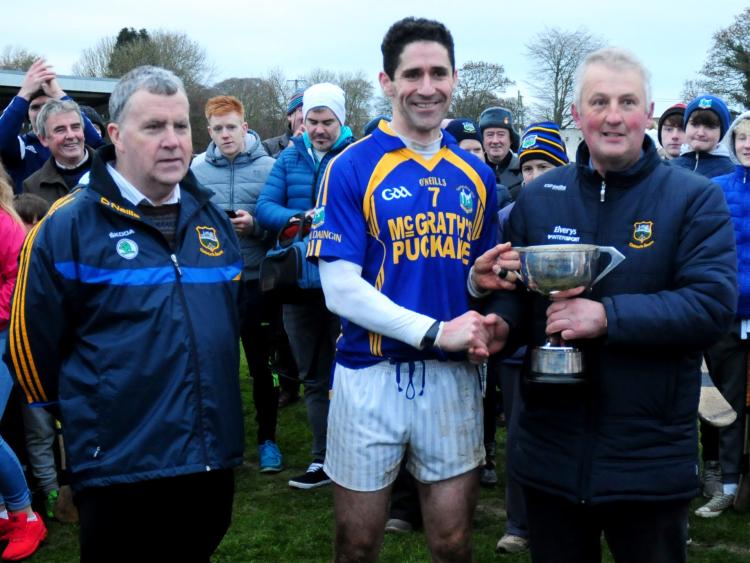 Kiladangan were crowned the Tipperary Water county junior A hurling champions at Holycross on Sunday afternoon when Gerry Slattery captained the North Tipperary men to superb win over favourites Ballybacon-Grange.

Kiladangan were disappointed to lose the county senior hurling final to Thurles Sarsfields, but closed out a terrific year for the club on Sunday. Normal time finished 1-13 apiece, but Kiladangan stayed the course and won this one with two to spare (1-18 to 1-16) after extra-time.

On Saturday in Golden Thurles Sarsfields beat Cappawhite-Sean Treacy's in the county under-21A hurling semi-final 2-24 to 1-10 and will now face Carrick Swan in the final. Carrick Swan progressed directly to the decider when North Tipperary conceded their semi-final - the South men were nominated by their division and have not yet played their divisional semi-final against Killenaule while St Mary’s Clonmel await in the final.

Ballinahinch-Templederry and Gortnahoe-Glengoole will face one another in the Tipperary Water County Under-21B Championship final.

On Sunday Ballinahinch-Templederry held off the challenge of South champions Grangemockler-Ballyneale (1-11 to 1-9) at Leahy Park, Cashel while Gortnahoe-Glengoole beat Cashel King Cormacs 2-12 to 1-12 in Fethard. Gortnahoe-Glengoole won the Horse and Jockey Kia Mid Tipperary Under-21B Hurling Championship final the previous Wednesday when beating Thurles Sarsfields 4-12 to 2-13.

Meanwhile up North Toomevara beat Borris-Ileigh 2-13 to 2-10 in the division’s under-21A hurling championship semi-finals. Toome will face Kilruane MacDonagh’s in the decider - Kilruane saw off the challenge of Roscrea 0-22 to 1-13 on Sunday afternoon.

There were disappointing results in division 2A of the Ulster Bank League on Saturday when Nenagh Ormond and Cashel RFC lost out respectively to Sunday’s Well (17-23) and Highfield (6-13). Both sides enjoy an opportunity to redeem themselves on Saturday, December 3rd when Nenagh Ormond host Blackrock College RFC and Cashel RFC travel to take on a high-flying Queen’s University team.

The weekend proved to be an encouraging one, however, in the Munster Junior League with all four Tipperary sides earning victories - in division one Clonmel franked their dominance of the league with a 24-5 win over Muskerry, Clanwilliam beat Skibbereen 20-7 and Kilfeacle & District won 31-3 at Old Christians while in division two Thurles RFC won 17-13 away to Charleville. All four are in action once more on Sunday, December 4th - Clonakilty host Kilfeacle & District, Clanwilliams are away to Cobh Pirates, Clonmel make the trip to Galbally and Thurles RFC are at home to Crosshaven.