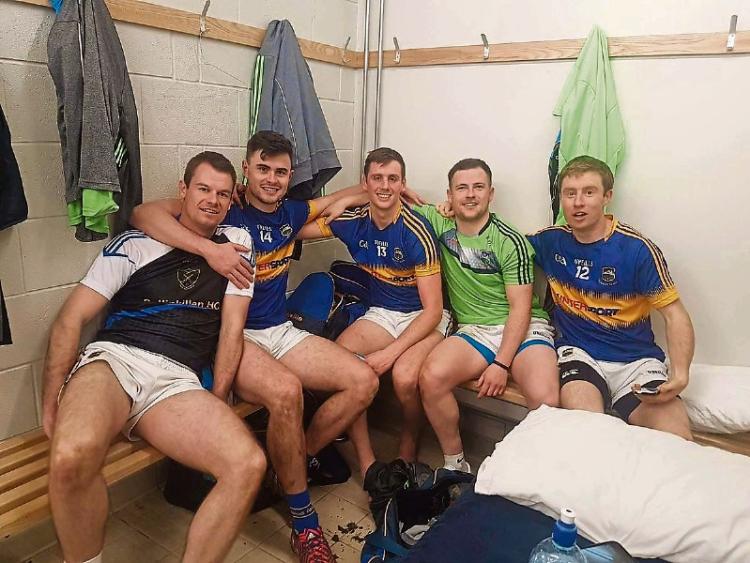 Tipp footballers celebrate in the dressing room after the game, including match winner Michael Quinlivan.

Tipperary footballers secured promotion to Division Two with a stunning win in Armagh.

And now they play Louth in the Division Three final in Croke Park next Saturday.

Armagh is always a hard place to win anytime but when rchard County are also chasing promotion, it makes it more difficult.

But a brilliant Tipp didn't let that faze them and they made the long journey worthwhile with a one point victory, 3-8 to 0-16.

Armagh led for much of the game, including a three point half time lead of 0-7 to 0-4, but Tipp always stayed in touch, with goals proving crucial.

But it didn't look to be enough as the game neared the final whistle and Tipp trailed by two points.

But All Star Michael Quinlivan justified his growing reputation in the game with a match winning goal that stunned the home crowd and made the long journey home for Tipp a much more enjoyable one.

Tipperary missed the chance to seal promotion last weekend when losing at home to Louth but now they have the chance turn the tables on the Wee County when they meet them in the final in Croke Park on Saturday.

The game throws in at 5pm, following the Division Four decider between Wexford and Westmeath.

And next season manager Liam Kearns has Tipp where he wants them - meeting teams such as Meath, Cork, Down, Roscommon and Cavan in the league.

It's a big step up but builds on the achievements of last season when reaching the All Ireland semi-final.

Congratulations Tipperary on a wonderful result.