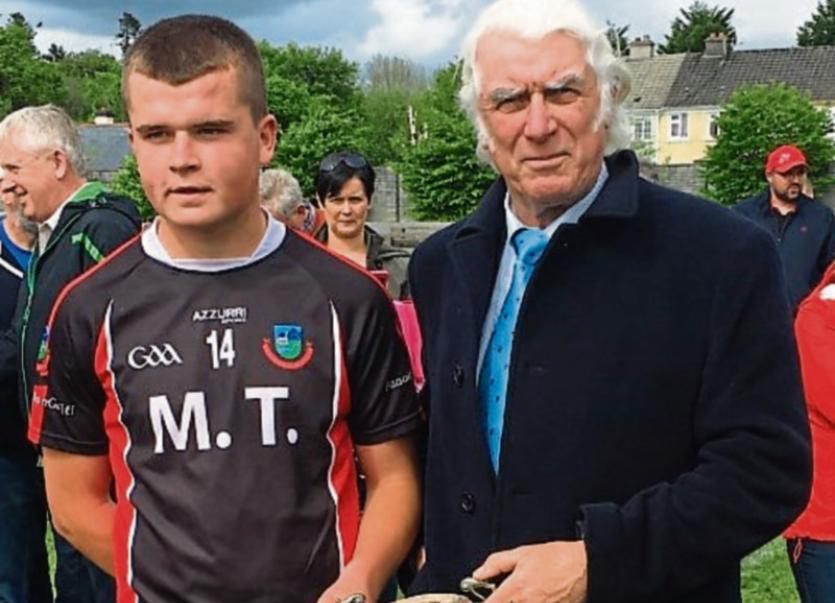 Galtee/Golden completed a three in a row of Tipperary Print & Design West Minor A Football titles when they got the better of Arravale Rovers in the decider in Dundrum on Sunday, 2-13 to 2-8.

The sides were level three times in the opening ten minutes with no quarter asked or given. Eoin Gallagher pointed with less than a minute on the clock for Galtee/Golden and this was cancelled out two minutes later by Michael Sharpe at the other end.

Shane Ryan edged the combo ahead with another point from play but Dean Morrissey levelled again with a very good point from a placed ball. Cormac Maher pointed for Arravale to send them one up only for Andy Byrnes to level at the other end in the next attack.

Two points in quick succession from Shane Ryan (free) and Adam McGrath saw a two point margin for the first time in the game. Galtee/Golden were now finding their groove and attacked with menace, forcing Timmy Esmonde in the Arravale goal into two great saves to deny certain goals.

The goal though was coming and when Andy Byrnes fed Alan Flannery, he made no mistake. The combo could have had a second goal minutes later when Eoin Gallagher saw his shot come back off the crossbar.

The Galtee-Golden team pictured with the cup after beating Arravale Rovers in the West Tipperary MFC 'A' final to complete a three-in-a-row.

This seemed to ignite Arravale Rovers and Alex Ryan Wynne finished to the net after a goalmouth scramble. Killian Noonan pointed and this was quickly followed by a point from Cormac Maher to tie up the game.

Niall Heffernan and Dean Morrissey swapped points before Shane Ryan had the last say of the half when he pointed from a free. The defending champions Galtee/Golden leading by the minimum at the interval 1-7 to 1-6.

The second half started with a bang when Rhys Byron put Andy Byrnes though on goal and he dispatched the ball to the net. This seemed to knock the stuffing out of Arravale as they failed to fully rise to the intensity of the first half.

Killian Noonan responded with a point from play for Arravale but Shane Ryan responded from a free at the other end. Andy Byrnes extended Galtee/Golden’s advantage as Arravale Rovers wide tally started to grow.

Killian Noonan reacted to a poor kick out and bore down on goal but he shot just wide. Alex Ryan Wynne then had another chance but his shot hit the side netting.

Dean Morrissey hit another point from a free to cut the deficit to four points with just three quarters of the game played. Shane Ryan though responded with two points (play and free) and it seemed Arravale would need a goal to get back into it.

Arravale got their lifeline, Conor Leahy played a long ball to Cormac Maher who set up Killian Noonan for Arravale’s second goal. Game on.

The game though turned again a minute later, Arravale Rovers miss kicked a forty five which went into Galtee/Golden hands and was worked up the field and pointed by Alan Flannery. What could have been two points of a deficit was now four and this seem to end Arravale hopes.

Galtee/Golden upped their attack and despite missing a few chances Shane Ryan sealed the win with a free just as the clock went into the red.