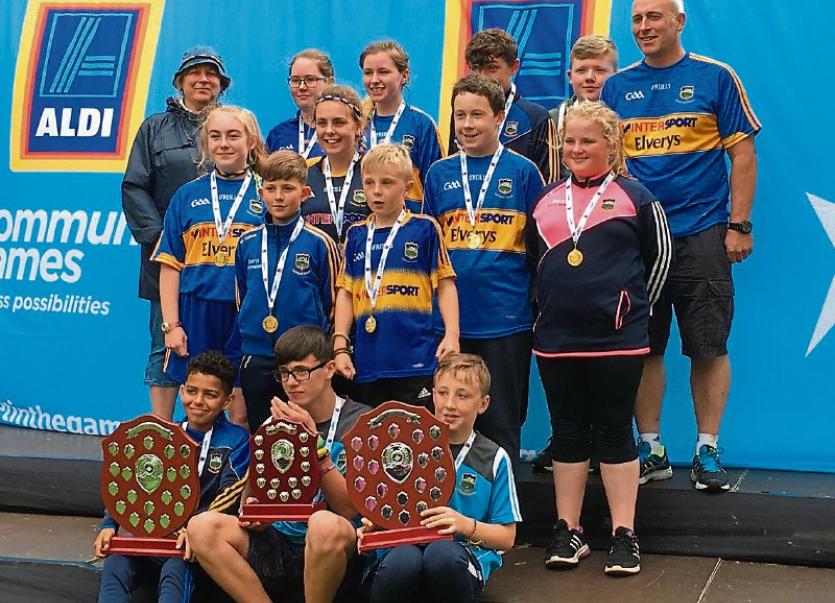 The three winning Skittles teams from Clonmel with their plaques.

A skittles hat-trick was the highlight of Tipperary success at the Munster finals of Aldi Community Games in Limerick on Saturday.

Tipperary teams returned home with eight gold medals and they now go forward to the All Ireland finals in Abbottstown.

The three skittles teams from Ss Peter and Paul's in Clonmel were the stars of the show.

In the under 12 final they took on Clare in the provincial decider. For most of these young competitors it was their first experience on a big stage final and both teams proved very strong. There was only a handful of points between the sides throughout but in the end Tipperary just about got the better of their opponents to win on a final  score of 301 to 279.

The under 12 final was followed by the under 14 decider also between Tipperary and Clare. This proved to be the most exciting contest of the day and ended in a draw at 310 points each. To decide the destination of the title and to see who would advance to the All-Ireland finals, each team member had to make one throw each to determine an ultimate winner.

It was a  nail-biting tussle right to the end but Tipperary proved themselves the stronger eventually winning on a score of 396 to 385 to be crowned Munster champions.

Following the successes of both under 12s and under 14s it was the turn of the under 16 and the added pressure of trying to make it three-in-a-row for Tipperary skittles. This game also was neck and neck for a long period but in the third throw Tipperary proved themselves yet again, clearing the ring with numerous throws. Tipp eventually went on to comprehensively on a score of 318 to 237.

So it proved a victorious and memorable day all round for Tipperary skittles and the three teams can now look forward to the All-Ireland finals in Abbotstown in Dublin in August.

Sincere thanks to coaches Mary Walsh, Robert and Caroline Hogan, to Sandra O'Dwyer treasurer and scorekeeper on the day, and to Michael O'Brien for all their help.

Silver medals went to the U11 Hurling team from  Cloughjordan and the  U12 Girls Football team from Moycarkey Borris.

Drangan-Cloneen u14 girls football team were beaten by Waterford while Killenaule- Moyglass boys Indoor Soccer were defeated by Cappagh, Co Limerick in their respective semi finals.