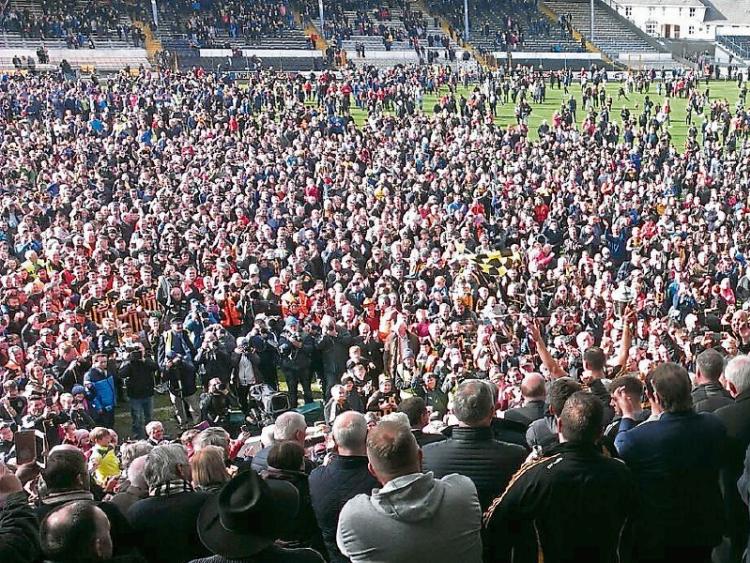 Kilkenny captain Cillian Buckley acknowledges the cheers of his side's supporters after their win over Tipperary in Nowlan Park this afternoon.

Tipperary’s torment in the ‘Temple of Doom’ that is Nowlan Park, Kilkenny, continued once again yesterday with a hugely disappointing showing in the 2018 National Hurling League final. The somewhat flattering six points defeat for Tipp – it might well have been greater – is always a bitter pill to swallow against your archrivals, but the manner of a somewhat lethargic performance in this lions den of manly hurling will cause major concern for Michael Ryan as he prepares his side for a summer schedule ahead.

Somehow installed as favourites prior to the game despite an abysmal record in the Marble City, Tipperary never raised themselves to the pitch of performance that they knew necessary to capture a first league title in 10 years. Alas, ‘The Premier’ were blown away in a second half which Kilkenny won by 2-12 to 1-7 and in which Tipp could only manage a single point from play over the entire second 35 minutes – from John McGrath two minutes after the re-start.

Even in the first half which they shaded by 1-10 to 0-11, Tipperary looked out of sorts beyond midfield and could be thankful to a solid defensive showing that limited Kilkenny to practically a one-man scoring show, T.J. Reid contributing eight points in a powerful opening half performance for the home side.

Tipp too were very reliant throughout on Jason Forde who ended the day with 2-12, leaving just five points shared amongst the rest of a forward line. Such a return was never going to be enough to end Tipp’s 50 year wait for a league final victory over Kilkenny. (Incidentally it was also Tipp's fifth consecutive league final defeat, 2009, 2013, 2014, 2017 and now 2018).

One of the few highlights of that opening period for Tipp was Forde’s 23rd minute goal which restored Tipp’s lead after Kilkenny had nudged ahead for the first time moments earlier. Alan Flynn at corner-back, arguably Tipp’s best find of the league campaign, won a magnificent ball in defence and began a move continued by John McGrath before Forde finished well to the net. When a minute later Sean Curran hit his only point of the day it seemed Tipp were on a roll but a three points advantage was to be as good as it would get for Tipp.

In the closing 10 minutes of the opening half Kilkenny began to get on top with points from play from Richie Leahy, T.J. Reid, Martin Keoghan and Reid again just on the stroke of half-time. Tipp in response added two of their own, one each from John McGrath and Seamus Kennedy.

A slow return to the field of play for Tipp gave hope that Michael Ryan was stirring up a hornet’s nest to face the inevitable onslaught from ‘The Cats’ if a rare win was to be recorded in this most partisan of venues. Within 30 seconds our hopes were dashed when full-forward Walter Walsh burst through to goal. Within 10 minutes of the re-start Tipp were four adrift and struggling. There was a chance provided for the visitors in the 40th minute when half-time replacement John O’Dwyer hit a powerful goal-bound shot but Eoin Murphy was equal to the best ‘Bubbles’ could throw at him. An early sense of de ja vu for Tipp appeared in the air at that very moment.

The Tipperary forwards were getting little change from a fired up Kilkenny defence where Padraig Walsh operating behind a dominant half-back line were cleaning Tipp out time and again. Tipp were living on scraps in the form of superb placed ball performance from Jason Forde which included four second half frees, a 65 and an excellent sideline cut.

A pair of rousing points from Walter Walsh who was growing into the game as it progressed were soon followed by Kilkenny’s second goal from substitute Conor Fogarty, indicative perhaps that Brian Cody, despite rumours of Kilkenny’s demise, still has plenty of choices to call upon. Fogarty’s well-taken goal put his side nine in the clear and worth every point of it. Jason Forde’s late goaled free five minutes from time changed the complexion of the scoreboard just a little, it was never going to do anymore than that.

It is back to the drawingboard now for Michael Ryan and his backroom staff. A league campaign that went to the very end will have taken its toll on his charges and with little over a month left to the beginning of a new-format hurling championship there are more questions now than answers at the end of this league campaign.

Today’s performance by too many wasn’t anywhere near the required level to harbour championship hopes. Michael Ryan, by his own admission afterwards accepted as much, and the players also will need to realise that if they hope to regain the Liam McCarthy Cup, performances like this latest one will not suffice.

Hopefully the summer will change things; the hurt from Sunday's showing might just be the catalyst for that. We can only hope.