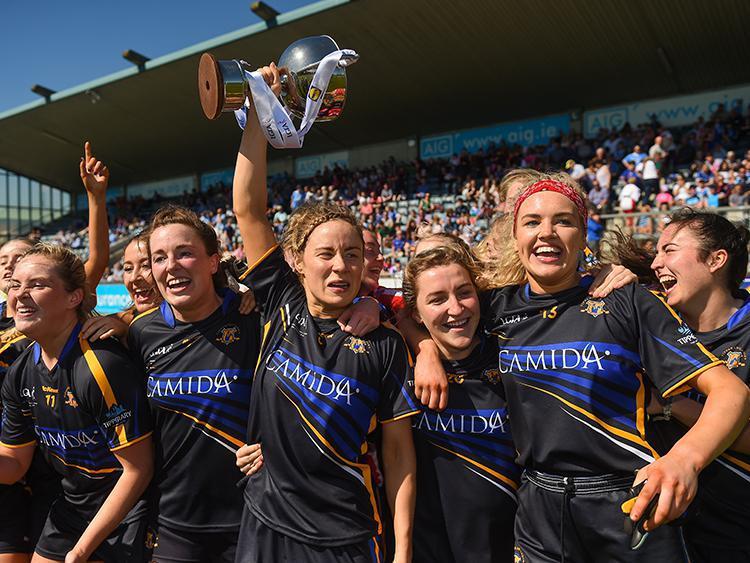 The Tipperary ladies football team were beaten by Cavan (1-14 to 2-14) in the TG4 All-Ireland Ladies Football Senior Relegation final on Sunday afternoon in Virginia, Cavan.

Cavan staged a superb second half comeback to retain their senior status the expense of Tipperary in the TG4 Ladies All-Ireland relegation play-off final played at Dolan Park in Virginia.

When Tipperary midfielder Aisling McCarthy pointed a free after half-time, that gave the visitors a deserved nine-point lead and they looked set for victory.

The game was in Cavan to facilitate dual player Orla O’Dwyer who played for the Tipperary Camogie side against Cork on Saturday.

Cavan centre-forward Aisling Maguire made that advantage count, in the home stretch scoring eight second half points as the hosts threw off the shackles.

Aishling Sheridan and replacement Lauren McVeety provided the goals in the final ten minutes to seal the famous victory.

In the first half, with eleven on her back but operating at full-forward, Aisling Moloney showed some exceptional point taking and despite being double marked, Cavan’s simply couldn’t get to grips with her and were at sixes and sevens all over field.

Along with corner-forwards Gillian O’Brien and Róisín Howard (two) and McCarthy finding the range Tipp looked assured and when Moloney cooly finished a controversial penalty before the break that saw Cavan net-minder Evelyn Baugh sin-binned, it looked like Shane Ronayne’s side would survive another season at senior.

Cavan, low on confidence at that stage, could only find the target from a pair of frees each from Maguire and Roisin O’Keefe as they trailed 1-9 to 0-4 at the breaking they didn’t appear to have a comeback in them.

Influential replacements Sinéad O’Sullivan and Aisling Gilsenan had the desired effect running at a coasting Tipperary side and Maguire kept popping up with scores all the time nibbling into the lead.

Tipperary started to panic, losing their discipline with four sin bins in the second half meant they ended the game with thirteen players and without key players such as Moloney and McCarthy would prove costly.

Cavan fuelled on momentum and a vocal home crowd roared their way to victory as Sheridan cut Tipperary open to bury to the net and another replacement Lauren McVeety notched a game winning 1-2 cameo to confirm their place in senior for 2019.