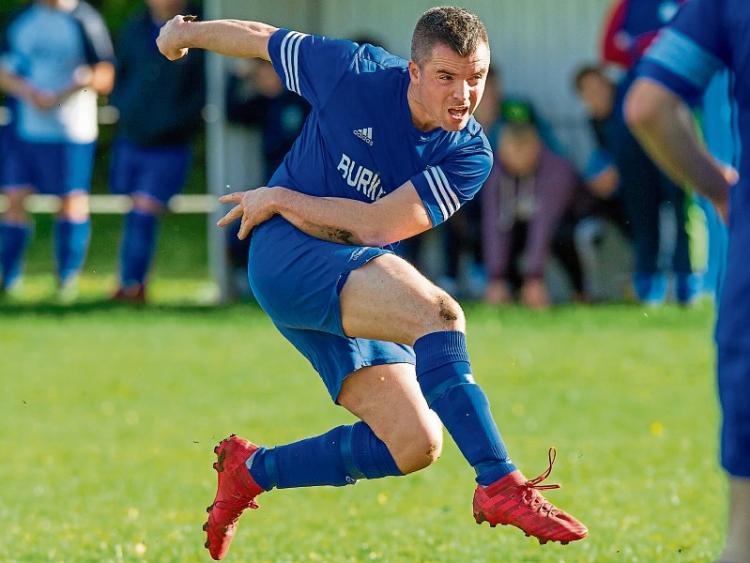 Shane Aylward (Killusty) thumps a shot at the Cahir Park goal during Sunday's Division 3 clash between the sides at Killusty. (Photo by Joe Kenny)

From a three goal lead with 20 minutes left, Clonmel Celtic nearly let it all slip as Old Bridge staged a late comeback that just came up short in the end, in a Clonmel derby that both teams were desperate to take the points from.

The hosts started the game on the front foot in lovely sunshine in front of a decent crowd, and Cian O'Sullivan twice came close in the early minutes forcing the keeper to get down well to push away his shot and then just failing to connect with a cross. Old Bridge gave notice of their intentions on seven minutes with a snap shot that was just over the bar, but the home side hit the front in the 18th minute with a well-crafted goal when Brendan O'Donnell put in a good cross that was neatly laid off by Seanie O'Hara to strike partner Kyle Ryan who found the bottom corner with a clinical finish.

Rather than build on this lead Celtic lost their way a bit although Niall Prendergast nearly took advantage of a defensive error but the keeper recovered to get down well to stop his effort.

Old Bridge played quite well for the remainder of the half restricting Celtic to long range efforts from Johnny Cagney and Kevin Waters that the keeper saved and the visitors were very much in the tie just one adrift at the break. Celtic made the perfect start to the second half with Ashley Keane heading home his first goal for Celtic from a corner only minutes in, but once again the visitors responded well with Ben Conway denying them twice with good saves.

It looked as if Celtic made the game safe in the 70th minute with another fine finish from Kyle Ryan, who combined well with his strike partner he ran on to a O'Hara’s knock on to fire the ball across the keeper into the net.

That should have been game set and match for the home side, but ‘The Bridge’ refused to throw in the towel, and they battled hard and played some nice football, with some creativity in the final third. On 76  minutes Ben Conway made an excellent double save but from the resulting corner Eoin Leahy was given too much space to head home, and in the final minute they pulled a second back when a Gavin Power free deceived the home keeper to set up a nervous final few minutes, but in the end Celtic held on for the three points.