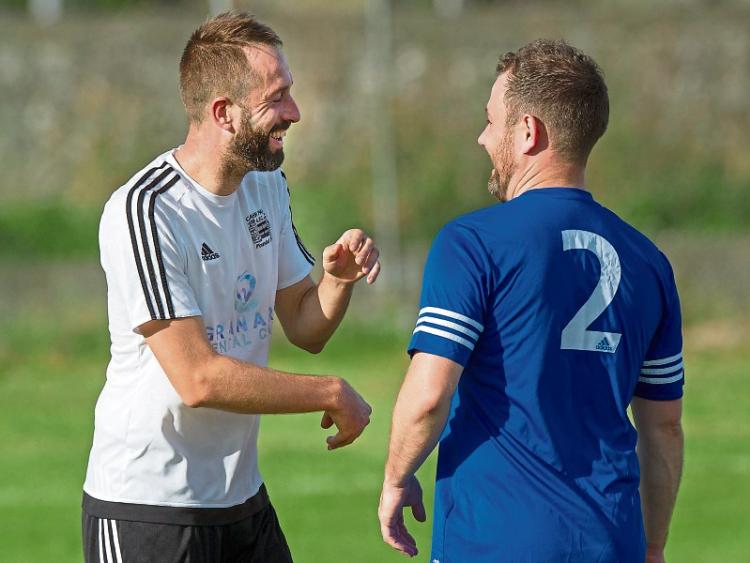 Jonas Kerr (Cahir Park) and Peter Gough (Killusty United) share a joke during the Division 3 league game played at Killusty on Sunday last with the visitors winning by 4-2.

Vee Rovers made an exceptional start to their Premier League season in the early weeks, but are now finding the going tougher as they went down to their second defeat in two, against reigning champions St Michael’s in Clogheen on Sunday afternoon.

The day was glorious and the champions started on the front foot dominating the early exchanges. They eventually made that dominance count in the 20th minute, when Michael Breen rose like a salmon to head home from a corner kick. After that Vee managed to play themselves back into the game with the tie being focused mainly around the midfield areas for most of the rest of the half.

The Saints however know when to hurt teams and they did so when they added a second goal almost on the stroke of half time, with Irish international player Jimmy Carr skittering down the wing and finding John Connery with a cross that the striker made no mistake with and added his second goal.

The second half was played at a more leisurely place with the home side having the lion’s share of the possession without ever really looking like they were going to make any real impression on the visitors’ goal.

And the Saints made sure they were going to take three more points when they added their third goal four minutes from the end. Forcing the home defence into a mistake, they returned a poor clearance and Ollie O’Driscoll found himself needing onto a tap in to add to his tally for the season.

Clonmel Town had to come from behind to take the points against a Cahir Park team that has been putting in some very assured performances over recent weeks, to kick start their own push up the Premier League table, and hopefully put themselves into a position where they can mount a title challenge.

The two sides were very even throughout the first half with the midfield area being congested for much of that time. The hosts eventually broke the deadlock in the twenty fifth minute when a Ross Condon break down the right, lead to a pin point cross landing on the head of Darren Murphy, who gave the Clonmel keeper no chance.

There was only this goal in the first half, and the visitors came out a different prospect in the second period, taking control of the game. They had to wait until the seventy first minute however to get reward for their good work when Jamie Ahern poked home after a goal mouth scramble to level the game.

Two minutes later Town were in front, courtesy of a header from Keith Browne at a corner kick that gave the Cahir keeper no chance. And after this, the visitors held on comfortably enough, restricting game to some long range efforts that never really trouble the Town defence.

A lovely sunny afternoon in Thurles hosted this Premier League game which didn't start well for the home side, who found themselves a goal behind after only three minutes when Vinny Godfrey scored for visitors with a wonderful finish after some excellent build up play.

Villa had to up the ante straight away and started to get on top all over the pitch. In the tenth minute Darren McGuire unleashed a great strike but Tipp Town's goalie made a great save, and this presaged a period of dominance by the home side.

Eventually this paid off and they got back level on the half hour mark when Kieran Hennessy was on hand at the back post to nod in from a corner.

Two minutes later Mikey Wade found himself one on one with the Tipp Town keeper but his shot was saved, and the teams went to the break level at one all. The hosts finally took the lead four minutes into the second half when great play by Hennessy on the wing saw him cross to James O'Sullivan who found the bottom corner.

Villa went a further goal ahead when substitute Dale Loughnane crossed and found Tommy Teer, who did well with a smart turn and his left footed shot found the top corner. Villa secured all three points five minutes from the end when Maris Baltins found Hennessy who got his second of the day to finish the game at four goals to one.