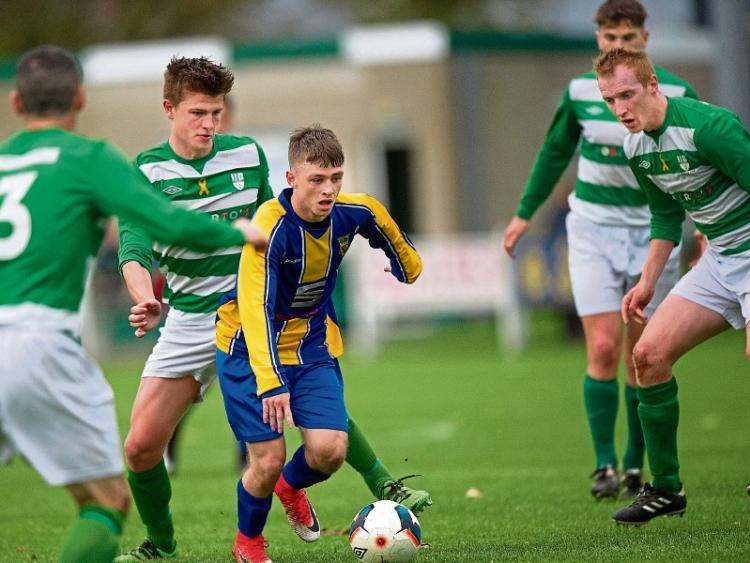 St Michael’s welcomed Carrick United to Cooke Park on Saturday for the latest batte between two old foes in what promised to be a mouth-watering tie in this years Munster League Champions Cup.

However in the end the game ended as damp a squib as the day that surrounded it as the TSDL champions rolled over their Waterford counterparts to record a very big win at the end of the ninety minutes.

Setting about their task right from the kick off the home side opened the scoring as early as the ninth minute when some nice build up play between Chris Higgins and John Connery found Shane Ryan who produced a sublime finish to the corner of the Carrick net.

Stung by this the visitors attempted to get back into the game in short order and both John Keyes and John Redmond tested former Carrick United keeper Aido Walsh inside the next ten minutes.

But in these games if you do not take the chances that arise you get punished and that was what happened just after the half hour mark when Willie Armshaw scored an opportunist effort to put the Saints two goals up. Stunned by this the visitors were still floundering around five minutes later when the home side effectively killed the game as a contest, with Jimmy Carr’s goal after he was found with an excellent cross by David Slattery.

Three up going into the second period allowed the home side to sit back and absorb the early flurry from their opponents and in fairness while Carrick threw all they could, the home defence never seriously looked like they were going to be breached.

Once that period had subsided, normal service from the front men was resumed and the home side got their fourth just after the hour mark when Pa Quinn flicked on a Carr corner and Slattery slammed home from close range.

Seven minutes from the end the home side got their fifth and final goal from a common source when central defender Paul Breen rose like a salmon in the area and slammed home a header much to the delight of the watching home crowd.

The visitors did still have one great chance to pick up a consolation goal when they were awarded a penalty kick three minutes from the end, but much as little else on the day went their way, neither did the penalty and it was fired high and wide to keep the Saint’s clean sheet intact.

This was a very competent performance in a competition that the home side haven’t had as much success as they would like in, in recent years.

On this showing however it’ll take a very good team to stop them in the weeks ahead.