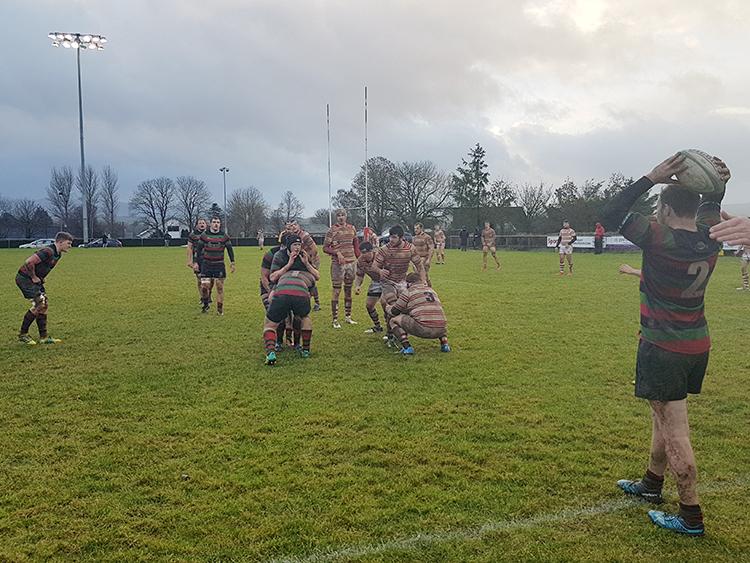 Nenagh Ormond pictured in action against Highfield RFC on Saturday.

A highly-impressive and high-flying Highfield RFC side consolidated their position at the summit of division 2A in the All-Ireland League when the Cork lads presented Nenagh Ormond with a nineteen-point defeat (17-36) at New Ormond Park on Saturday. The home side gave it everything they had, but Nenagh Ormond were simply out-classed on this occasion and now find themselves second from bottom with only Galwegians propping up the table below them.

Ormond were poorly supported on Saturday and it is now that the club need the people of Nenagh to come out and cheer on their efforts. Considering the resources of the club Nenagh Ormond are doing especially well to feature in division 2A of the All-Ireland in the first instance and with a battle to avoid relegation on the cards everyone associated with the team would appreciate your support for the remainder of the season.

In atrocious conditions on Saturday Nenagh Ormond coughed up a penalty straight from the kick-off and fell 0-3 in arrears. The home side earned a penalty of their own in the third minute, but failed to convert the opportunity thanks to facing the driving wind and rain.

Nenagh Ormond did especially well to deny the visitors a try in the eighth, 11th and 14th minutes when disciplined and determined tackling frustrated a whole series of Highfield attacks. Indeed, the brave Nenagh lads gave it everything they had in the opening half with a Patrick Scully hit on Highfield winger Paul Stack a particular highlight.

Fire and pure heart, however, can only take you so far against such an accomplished opponent and in the 17th minute Highfield stole a Nenagh lineout and three phases later Eddie Earle plunged over for a convert try (0-10).

Ormond opted to run the ball from deep inside their own half in the 29th minute and paid a dear price when, following a knock-on, Highfield rumbled over for a second try which was converted. Then, fully four minutes into first half injury time, match official Dermot Blake deemed that the home side had illegally pulled down a threatening Highfield maul and presented the visitors with a penalty try. Highfield RFC led 24-0 at the break.

Nenagh Ormond started the second half in the determined mood, won three penalties and got off the mark in the 43rd minute when Alex Ropeti converted a placed opportunity (3-24).

Highfield responded to the challenge and carried the ball brilliantly into the teeth of the elements before mauling over for a Colm Gallagher try in the 54th minute (29-3).

In the 68th minute Ormond earned a penalty try of their own when the home side impressively dictated the terms and conditions of a scrum right on the Highfield line (10-29), but Highfield illustrated their class during the remainder of this contest when the Cork lads drove at the Nenagh line. And, Highfield were rewarded for their ambition in the 75th minute when plundering another converted try.

Nenagh Ormond, however, refused to lie down and in second half injury time Kevin O’Gorman galloped over - Alex Ropeti added the extras.

Nenagh Ormond will arrive at the half way point of their All-Ireland League division 2A campaign on Saturday, December 15th (2.30pm) when they face bottom side Galwegians in Galway.

Even at this early stage of the season the landscape of the division would suggest that Nenagh need to win this contest before the league takes a break. Ormond will then resume at home to Galwegians on Saturday, January 19th.